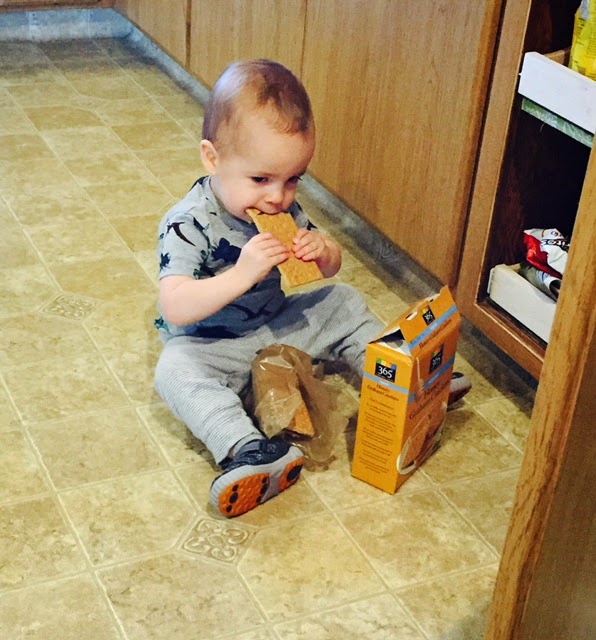 My current take on motherhood, as I post my first blog in five months:

Becoming a parent initially either makes you, breaks you, or you remain mysteriously the same (this third group of people is sort of creepy. I don't get them).

Any guess which category I believe I fit into? Yeah, broken. Well, I think I was broken. It broke me, having a baby. In every way. Everything I thought I knew about myself and other people basically crumbled and I found myself alone (ish. Baby in tow, always) with some very dark thoughts. It's not until now that I am recognizing how much I struggled with becoming a parent.

It sucks, always living life with this "hindsight is 20/20" thing going on. I kind of thought that by my mid-30s I'd figured myself out, and knew what I needed and how to get that, but as it turns out I'm still able to surprise myself.

In any case, I'm feeling a lot more normal these days. Everything is not perfect and there is work still being done, but life feels much more doable now.

We shall never ever speak of one very important aspect of babies, because to speak of it is to curse it. I shall not even say what the status of this particular aspect is, because that also curses it. I may be cursing it right now simply by typing this. My mind, after all, knows of what I write. This is a risk I take. Only know that this aspect was one way, and now it is another way. This change is what enables me to write these words today (well now I've really done it. Curses ahoy!)

One thing I can speak of is weaning. Oh, glorious, glorious weaned toddler, who happily chugs his mixture of coconut and almond milk. Given his druthers, that child would still be nursing, but I'd be miserable. I never plugged into the bliss of breastfeeding. It seemed mainly painful and weird, particularly after Graham's teeth arrived. Sweet Jesus. I do feel sort of proud of doing it for as long as I did, only because it's supposed to be so healthy for him, but oh yes, I am beyond happy that is over.

He loves swinging on the swings at the park and being tickled and the cats and Thomas the tank engine (whom he calls ASS, no matter how many times I say THOMas). He runs helter skelter around the neighborhood and loves taking baths and he eats like a horse (still long and skinny though). He does not like vaccines or most vegetables or being held upside down or bubbles or bushes at night.

He's an enormous cuddle bug and I find him to be the most precious creature who walks the Earth (naturally).

Bodies are just different post-pregnancy, aren't they? It's become clear to me that while I might have looked sort of passable in a fat sort of way at my current weight before pregnancy, now I just look fricking yuck. The belly does not want to stay flat, does it? The chins want to proliferate. The arm jiggle is jelly galore even though I swear there are muscles of steel under there from carting my child around constantly.

So at the urging of a friend, I joined Weight Watchers. I've done this a couple times before and after the last time I swore it off, declaring to whoever would listen that tracking one's food is simply ridiculous and a waste of time and impossible to sustain and horrible and demeaning and I hated it. Oh fuck I still hate it, but you know what? It's the only thing that works. And it's terribly depressing not only to realize how little I actually need to eat, but to eat that little. And it's sad to know I will need to track for the rest of my life if I'm going to not be Jabba the Hut. I've lost 14 pounds since December and I still feel fat. I expect it will take me the rest of the year, at least, to lose the rest, given how slow and torturous this process is. Once I reach my goal I guess my daily diet will be something like: An egg, a piece of celery, and a puff of whipped cream for dessert.

Someone is paying me to write things. Like, marketing sorts of things. It's been ages since a person paid me to write, and it feels sort of insanely nice in a couple ways. In one way it's nice to know I still have value beyond being a mom, and in another way it's just nice being paid to write again. It's a different field than what I'm used to, but I'm really enjoying it.


So that's the update. The post title is a joke. I do hope to update a lot more regularly now ... now that I have time because of .... reasons. I really hope to do Bachelor recaps again -- it's been killing me not to, but I just didn't have the time/energy. And I have no idea if blogs are all dead now or if people read blogs or care, but I'm not sure I care either way. I still enjoy doing it, so here we are.