That was me, coming up for air.

Touche to anyone who ever said to me: "You have no idea what you're in for." Touche.

And sorry I don't have time to figure out how to make the accent over the "e" right now. WE HAVE LIMITED TIME, PEOPLE.

So. There are so many things I want to talk about. So I'll just talk until my boss wakes up, which will probably be in 3 seconds. Goodbye forever.

For starters, can we discuss sleep and naps and oh my god whyyyyyyyyyyyyyyy. One book I read calls what I have "trained" my child to do "accidental parenting." Which is to say I have trained my child to believe he needs to be held and/or nursed in order to sleep. Woe is me. Major woe.

So of course this means SLEEP TRAINING, which is from THE DEVIL. I am trying to train him to calmly drift off to dreamland in his crib for every nap HAHAHA. You know how this is going, don't you? My pediatrician recommends the Ferber method, or at least what I think is the Ferber method, and I just don't know because that's kind of like crying it out? That said, have I ever met anyone whose kids are good sleepers and didn't at some point cry it out? No. Very sadly, no. Please tell me if you are a person with well-sleeping children and you have a kinder method. Because Graham won't be the only one crying it out, you know?

(BTW can I just say VERY RANDOMLY that I am managing to watch The Bachelor this season and WISH I had time to recap because holy dumbasses. Sharleen or whatever her name is? What in the world? And South Korea of all places? I am so confused. Also, Juan Pablo is my major influence when it comes to using CAPITAL LETTERS lately because I follow him on TWITTER.)

Other things that are going on:

- I am in some kind of weird mommy-and-me yoga. Which is basically a bunch of women hanging out while their babies scream bloody murder. It's a JUDGMENT FREE zone, which is why I go to my zen happy place when all the babies are screaming. Like, even if my kid is screaming, I still find other kids' screaming annoying. I am such a hypocrite.

- I am dairy free and hating it. I don't think you QUITE understand what a large part of my life ice cream used to be. Making matters worse, I received an ice cream maker for my birthday, and it's just collecting dust. No cheese, either, which is TERRIBLE. I realized most of what I eat on a daily basis has cheese in it. No milk. No MILK CHOCOLATE. Do not ask me how I am surviving this, I have no idea. (Also, in case I've failed to mention previously why I am dairy free, it's because whenever I eat dairy, Graham pukes like crazy)

- Graham is 9 weeks old! It's nuts. He's in the 50th percentile for weight and 75th for height. He's long and lean and I'm still waiting for him to chub up. WHERE MAH CHUBBY BABY AT. Anyway he's still frigging adorable and loves ceiling fans and smiles a lot and has been making the cutest noises. 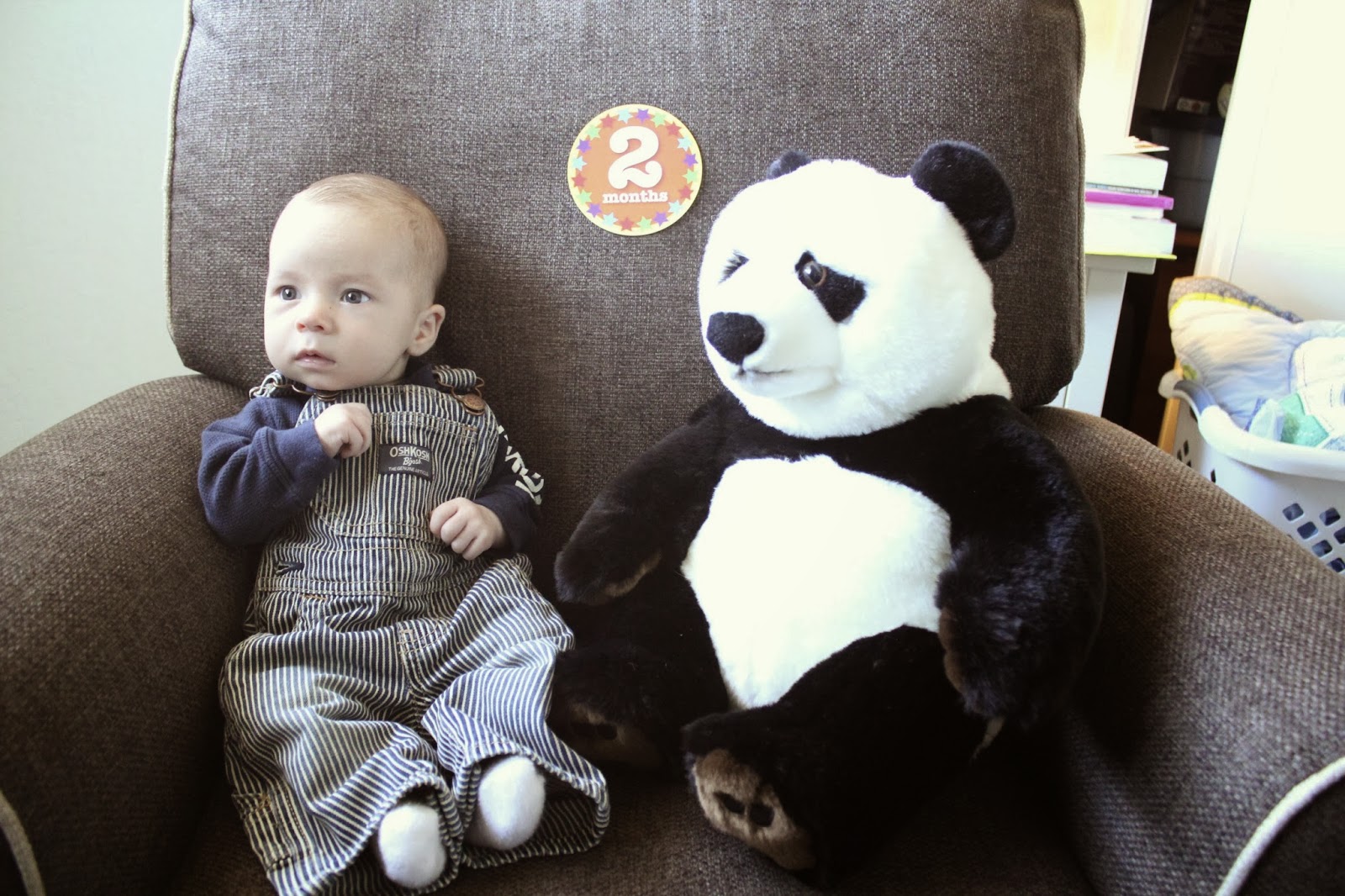 - Breast feeding is still so meh. Especially when my nipple is being chomped, I mean FRIGGING OUCH. And also when I wake up drenched in boob juice in the middle of the night, which is charming.

- I am never going to catch up on sleep, ever. Ever ever.

- Anyway, I cannot believe I actually found the time to write this. Sir must be so tired from NEVER SLEEPING SHEEZUS. I'll be back to update, eventually! Please give me all your best mommy tips!
Posted by Erin at 2:58 PM 33 comments

I started a post about motherhood THREE WEEKS AGO and now here I am attempting to finish it. It's just going to have to be as brief as I can make it, since we seem to have entered the notorious 6-week fussy period and daytime naps are not really happening. In fact, I just got Graham to go down for a nap, knock on all the wood everywhere, and therefore I need to write this and then go join him in blissful unconsciousness because, yeah, I am friggin exhausted and brain no worky so gud on just a few hours a night.

(I'm watching him on the monitor as he squirms in his crib. This update may not make it for another few weeks)

(He is farting. I am drinking decaf and pretending it's helping.) 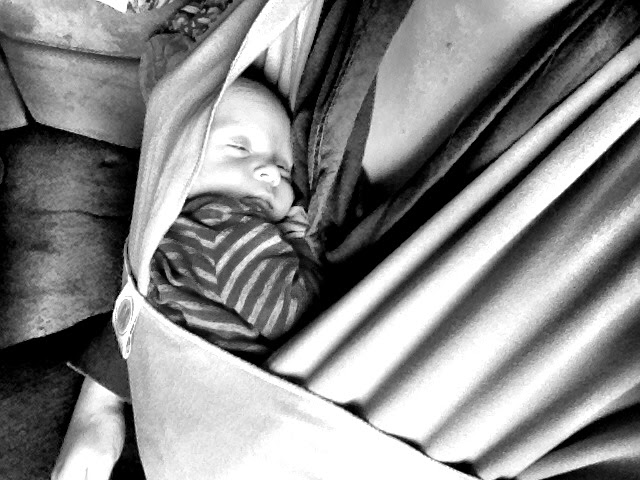 So basically, with my brain in its current state, I have probably nothing to say that's very insightful. Motherhood is a crash course. It's not easy, but it's amazing and surreal. Growing a person who subsists solely on liquid that comes out of your boobs is really weird. At first I was like: This is a cool bonding experience! And now I'm like: I will do this because it's the right choice, but once that year is up, the tap turns off.

That's not to say that breastfeeding is particularly difficult, just that it's extremely demanding. I did attend a breastfeeding support meeting, which was helpful and revealing -- so many women struggle with breastfeeding in a variety of ways. (And also, I have absolutely no judgment against women who choose not to breastfeed. It's none of my business what you do with your boobs or how you feed your kid.)

Also, pumping is pretty much the worst. That is all. 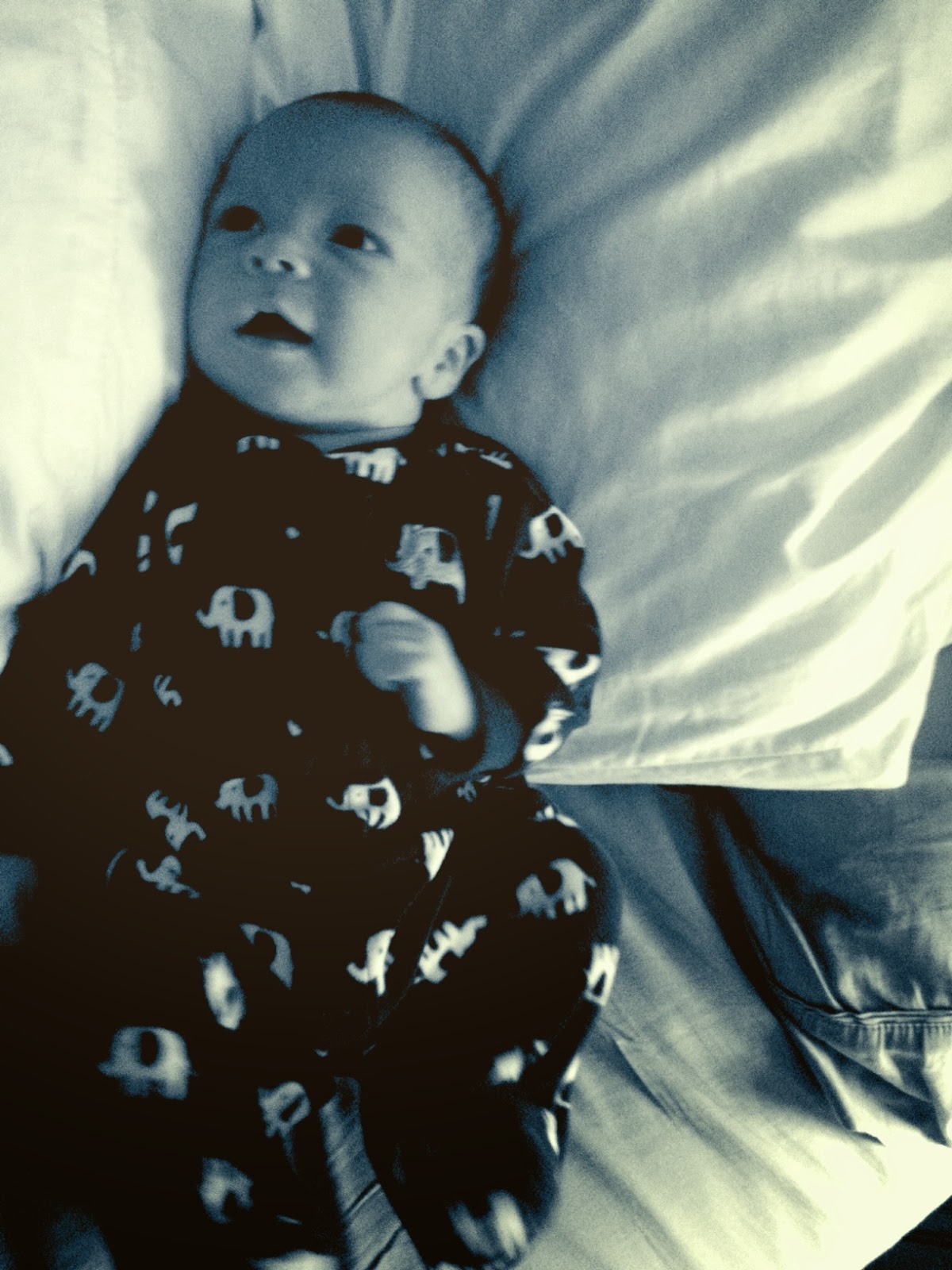 Graham is still sleeping in our room, in his crib. This is good and bad. Good because I can respond immediately if he needs me. They're recommending you keep the kid in your room for like six months nowadays to prevent SIDS. Six months ... I just don't know. He makes so much noise in his sleep, particularly starting around 5 a.m., when he's decided he hates his swaddle and needs out of it immediately so he can hit himself in the face with his hands and piss himself off. This is a fun game newborns like to play. I'm at a bit of a loss. 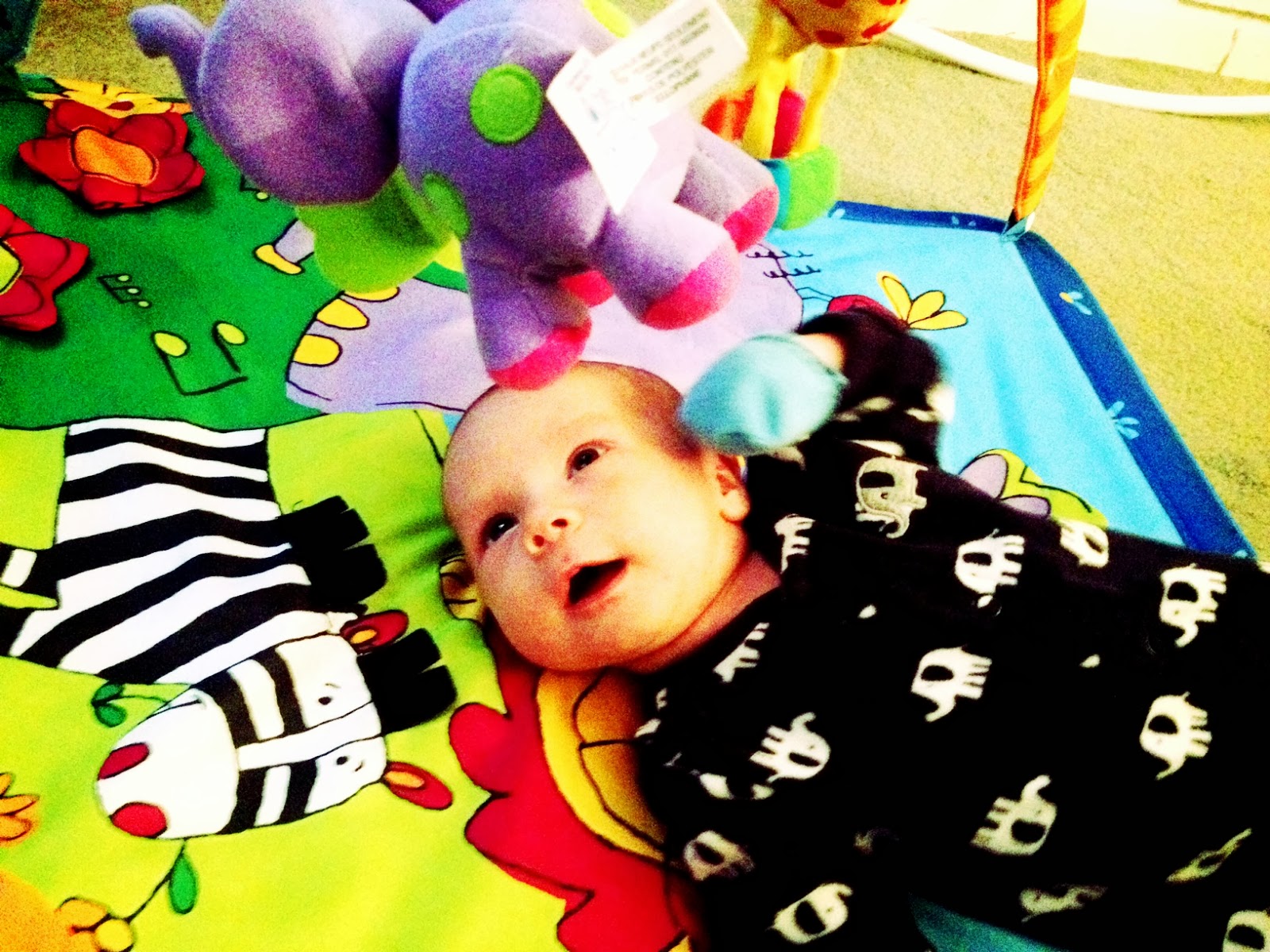 I've addressed eating and sleeping, which just leaves pooping. Pooping is all normal. We went up to size ones in diapers and I'm considering checking out the earth baby diaper composting service because holy diaper-filled landfill. We are producing a horrifying amount of trash right now.

Changing boy diapers seems fraught with more danger than girl diapers, particularly because boys are able to, and do, pee on their own faces. Just ask Graham, who needed an outfit change at 2 a.m. today. 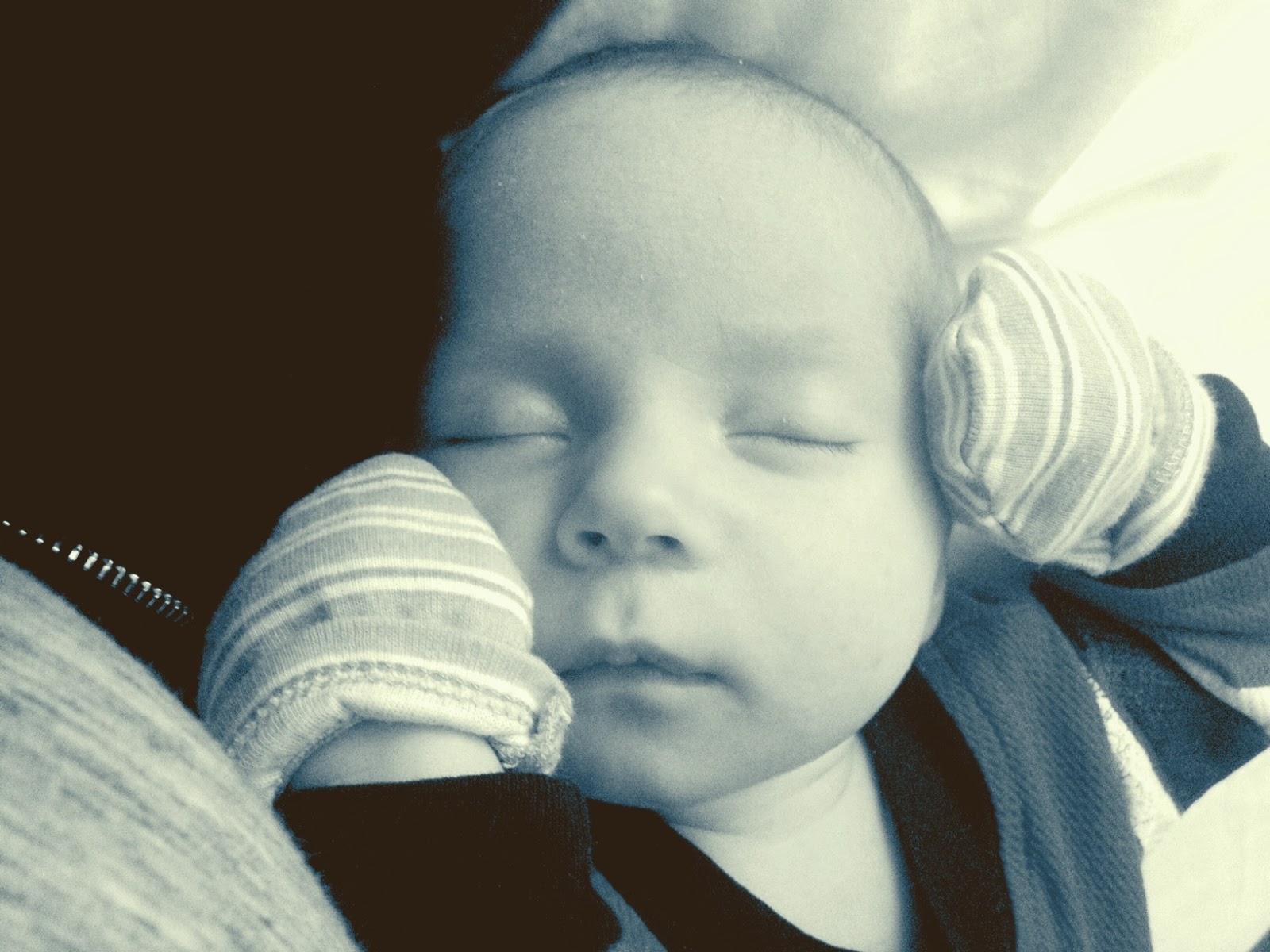 So yes. Six weeks is a fussy age, but also right about when babies start to realize the boobs they've been sucking on are attached to an actual person, and then they smile at you and it's like, ok. You are pretty much the cutest thing ever.