This is the week I'm pimping my FREE ebook, so it seemed appropriate to write a book review and stay topical.

Excuse me for a moment while I brag.

My book is the #2 selling book in women's fiction/humor on Amazon right now! And by selling, I mean hella fools are downloading it for free, of course. It's ranked #564 in the free Kindle store, which may not seem impressive to you, but ... I am impressed! I've also had 542 downloads since yesterday! Which is more than I've sold since the book was published, hahahahah.... But that's why this promotion exists.

Anyway, I will now get to the review. 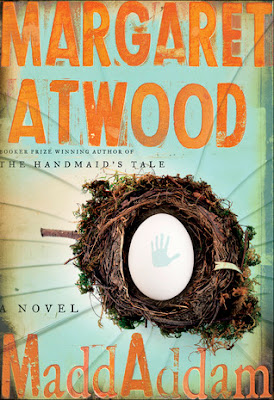 You may recall this is the third in Atwood's apocalyptic trilogy. I think she must be extraordinarily creative and smart to have sculpted this futuristic world, destroyed it, and then shown us what the aftermath looks like. The details are amazing. I really, really enjoyed the final book in the series, and I gave it five stars on Goodreads, which is very unusual for me.

I'd been really impressed with the first novel -- Oryx and Crake, and less so with the second -- The Year of The Flood. Why are so many second novels in trilogies just piles of poo?

Anyway, the premise is everyone but a small group of people is dead. Among the non-dead are a group of naive bio-engineered humans, and the rest are a bunch of former vegan/hippie types. The final book gets into how they're surviving, some romantic entanglements, the adventures of one survivor named Zeb, and finally a showdown between them (and their pig friends) and a malevolent group of survivors. (There are always malevolent survivors!!)

So yeah. I loved it.

Now I'm reading The Vaccine Book and Secrets of the Baby Whisperer, and am completely disturbed by information in both.