put a bird on it

There were tons of great comments from all sides on the last post. Lots of different opinions on vaccines, cord blood, and circumcision, and then of course the less important but still vital topics of conversation: Pooping, and pubic hair. Thanks to everyone who commented! It's helped move me toward decisions on all fronts.

So a couple updates in the pregnancy arena -- First, we started our childbirth class last week. And then Saturday was my baby shower!

The childbirth class was ok. It's a six week course. I didn't expect to learn much in the first class, and I didn't, but I think it was helpful for my husband. A lot of the guys in the class seem to be absorbing new information, so that's good. There are eight couples, and me and my husband are probably among the top three oldest. Among the other "old" couples are one woman who had IVF (I sort of want to sit her down and trade stories) and one who's had morning sickness her entire pregnancy. Myself and the IVF chick are the farthest along (due one day apart in late November), and the least farthest isn't due until February.

Anyway, they hold the class in the waiting room of my doctor's office, which would be OK if the air conditioning ran after hours. It ended up getting quite swampy and uncomfortable in there, and I was extra-annoyed by the end of the class, when we were giving each other massages on the floor and practicing breathing exercises. My husband's rubbing my back and instructing me how many "hee hees" to breathe, and I am just like PLEASE STOP TOUCHING ME. Please give the pregnant ladies air conditioning. They need it.

So then on Saturday, my friend Katie, my mom, and my sister threw me an amazing baby shower. I still don't really know how to adequately express how I felt that day. It's just an extremely surreal experience to finally be attending my own shower after all these years attending friends' baby showers and struggling with conceiving and miscarrying. When all was said and done, I felt like I'd just hit a huge milestone.

I stole some photos from my talented friend Anne's facebook page. She takes lovely photos. 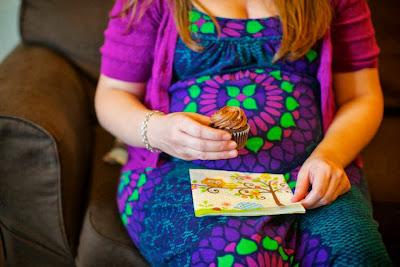 The belly and the cupcake. I promise I will post many photos of the belly and my actual head later on. 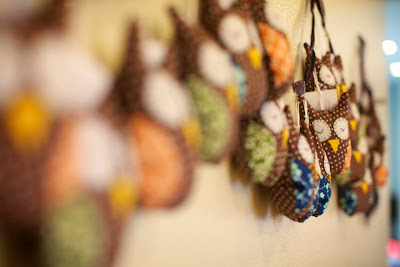 There was a sort of woodland theme that included these handmade lavender sachets my sister sewed. She should really sell these in her etsy shop -- they were a huge hit and so cute.
Also, I totally love owls and I don't care if it's trendy or if the trend has officially died. I've loved them since I was a kid, so I win. 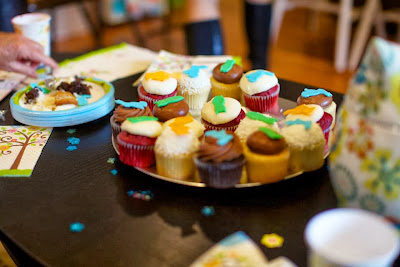 Cupcakes. So much better than regular cake, you know? These are from Kara's, and are to die for.

Christina brought three-week-old Gianna, and everyone was duly impressed that she was showered, wearing makeup, and looking darn cute. Motherhood suits her well.

And there were many other good friends who drove a long way in the rain (rain!), and I am just so grateful. They know what this moment means to me, and I hope they know their friendship is invaluable.