When I imagined the work taking place in my house this week, I estimated it would take like five hours for a team of dudes to demo a couple walls, insulate, re-drywall, and texture.

This is a thing I often do -- underestimate the amount of time a project is going to take -- because of sheer ignorance.

Lessons learned: 1) Baseboard needs to be removed and re-installed as well. Easier said than done. 2) Sheetrock needs to be smeared all over the drywall cracks. Twice. Hahahahaha. You know, I thought drywall and sheetrock were the same thing, but sheetrock is, like, this gooey stuff they shove in the cracks so your walls don't look stupid when they paint them. Texturing, on the other hand, takes like 5 minutes. 3) Painting hasn't started but considering how the painter asked me three times if I wanted the baseboard painted while he stared at it forlornly, I'mma go ahead and guess painting is gonna be a bit more of a project than I anticipated as well.

So after I mentioned how I thought my gray options looked blue, and a couple of commenters were like: Yeah that looks blue/green, I started doing some googling and realized this blue-looking gray problem is a common thing. So I did some Pinterest research and found a few grays that swear they don't look blue, and went out and got some samples of those.

I put the new samples up in two different rooms and you can see how different they look in the different rooms. Partly due to lighting and partly due to the existing paint color. I noted the new colors with numbers so the 1s, 2s and 3s are the same colors, believe it or not. 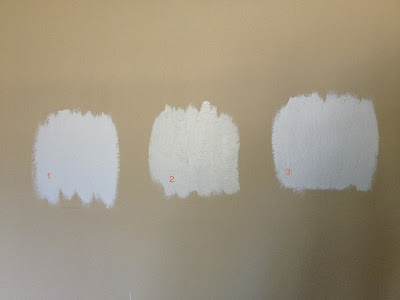 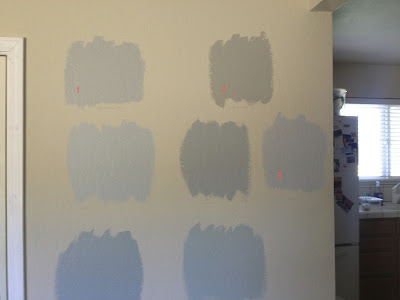 We are going with Number 1.

Then while I was browsing the Sherwin Williams site I saw they have a Pottery Barn kids collection, so I went ahead and grabbed a sample of one of those colors, even though I'd already chosen the blue that I wanted for the baby's room. 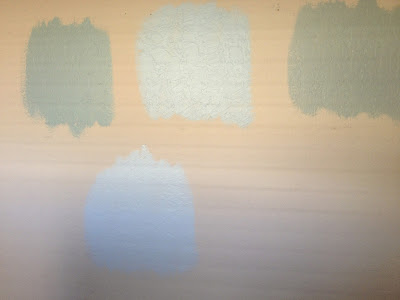 Crappy lighting but the new color is at the bottom. Also, all the samples are in a semi-gloss, unfortunately. They can't give you flat samples, for whatever reason. We're sticking with our original decision, which I will wait to tell you about until the nursery is done.

So that is pretty much all the excitement over here, aside from everything -- everything -- on my body being swollen and me eating a whole bag of mini milky ways in 24 hours. Maybe tomorrow I'll have some paint pics! *orgasm*