Not much, what's new with you?

I cannot figure out how to write this.

I guess I will just do it chronologically.

There was Christina, standing in my living room, looking a little worried and telling me she had news. So I uncharitably guessed that an unmarried friend of ours was pregnant, and she said, No, I am. Which was a major things-you've-given-up-hoping-for-coming-true moment. And, oh, she'd been a little worried about how I would take it, but I was elated. Floated around for about a week with a smile on my face, my faith in the universe restored.

Until I remembered it wasn't over. I still had to somehow make the same happen for myself. Do what I'd been trying to do for years. Number one goal, unmet. Worse, really -- met, and snatched away, twice.

So I saw a new doctor, who scheduled a test, and almost all these tests involve me on my back, legs spread, and a couple strangers poking around in my lady bits. No exception here, where iodine was injected into my womb. The test said: normal.

I saw my cardiologist, who didn't have anything new to say other than to continue to be an annoying prick who I need to fire.

I started sleeping better after my husband, who should be sainted, resolved a snoring issue. Sleep is the great equalizer, no matter what anyone says.

I tried the Paleo diet and juiced vegetables and quit caffeine and started a baby aspirin regimen. I walked a lot. I half-heartedly attended cardio-kickboxing classes. I lost almost 20 pounds.

I went to a dentist, which I'd been putting off for years. Two cavities, but other than that, nobody said The disease in your mouth has been affecting your fertility. Which I'd kind of hoped for, just so I'd have an answer.

I asked for progesterone. Doctors nowadays often won't say I think you should take this. They say We can try this if you want. So basically your health is in your hands, and this is the biggest lesson of the last three years. I asked for it and started taking it.

I started acupuncture and herbs, which I didn't know if I believed in. The effect I know it did most certainly have was to make me feel relaxed and positive -- I felt like I was doing something good for myself every week, working toward a goal. And as crazy as it sounds, there was the vision I had on my third visit in which I was standing in the sand, holding a male baby.

And what I didn't know at the time was that I was pregnant.

I always test too soon. I tested on Day 20, and nothing showed up in the first few minutes, so I threw it out. I tested on Day 21 and forgot about it for an hour or two, left it on the bathroom counter. I came back to find a faint, faint positive line. Burst into tears, started shaking. Dug through the trash for the Day 20 test. Even fainter positive line. Googled "false positive pregnancy tests" and "evap lines" with inconclusive results. For those wondering, I don't believe in false positives or evap lines. I've been testing for years, and the only positives I've ever gotten, no matter how long the stick sits there, have actually been positive. 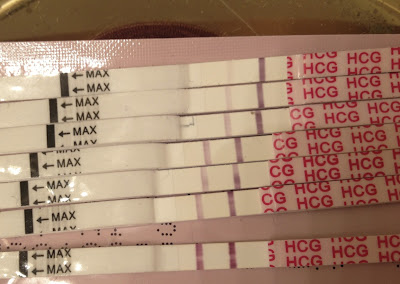 And by the way, sorry for the fertility lingo if you're reading this and wondering about Day 20 and evap lines and all that. This has been my world for a while.

That was in March. Today is July 1 and I am 19 weeks pregnant with a boy and this whole thing feels very unreal, like I'm watching it happen to someone else. I mean, yes, that's me in the maternity pants, buying all the peanut butter chocolate ice cream while the clerk eyes my belly with an "is it burritos or a baby" expression, but I scarcely believe it.

It's thrilling and frightening and yes, I'm going to be someone's mother, and no, nobody made me prove I could do it first. It's terrifying but such a relief at the same time. 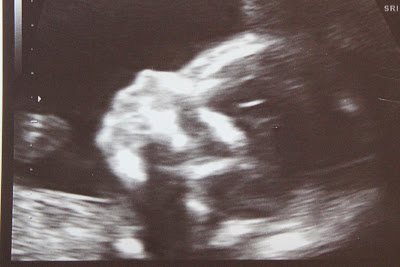 I'm posting this on both my personal blog and the Tired & Stuck blog, but I plan to update with baby-related stuff only on my personal blog. For those ladies out there who've followed along and been through similar struggles, thank you so much for every kind word. I wish the same miracle on you.
Posted by Erin at 11:51 AM

Email ThisBlogThis!Share to TwitterShare to FacebookShare to Pinterest
Labels: babies