And now back to our regularly scheduled programming

I mean, don't worry, I am going to spam the hell out of this place with my book. Repeatedly. But there's also other stuff going on right now, like being 22 weeks pregnant.

And, by the way, MAJOR thank yous to everyone who's bought a book or gotten their free Prime copy. I expected to sell approximately three, and as of this moment I've sold 29! So I pretty much win at life.

Also, for those who've reviewed on Amazon or Goodreads, HUGE thanks! That sort of stuff is invaluable and it feels great to have your support.

But anyway. Yes. Pregnancy. It's still something else! I'm definitely in the "sweet spot" of pregnancy at the moment, even though I have heartburn and cankles and walking from the car to the grocery store makes me out of breath. At least I don't feel like barfing and I am sleeping a little better. Of course now that I've said that I fully expect to be awake all night tonight, staring at the ceiling.

I'm hyper-aware of all kids at the moment, particularly little boys. I saw the cutest little boy in Target the other day and had to stop myself from squishing his little face until it popped. And today a Cheerios commercial with a little boy made me cry. Not surprising AT ALL since I will cry over anything right now.

Anyway, while at Target I wandered into the infant clothing and pretty much rolled around like a pig in shit. Which is so different from how I used to feel in this section. This is a far cry from major heartache.

And then I bought several little outfits, even though everyone says not to, especially not the ones with SNAPS, for godssakes, get the ones with ZIPPERS, but there are so few cute zipper ones. 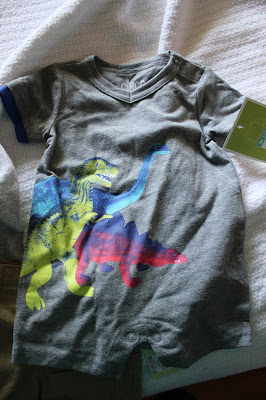 Man, the photo quality here sucks. Those are dinosaurs. So cute.
And yeah, they're all wrinkled. 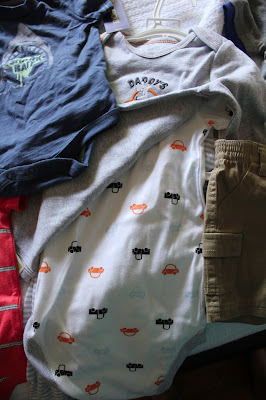 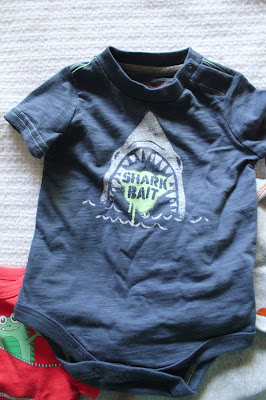 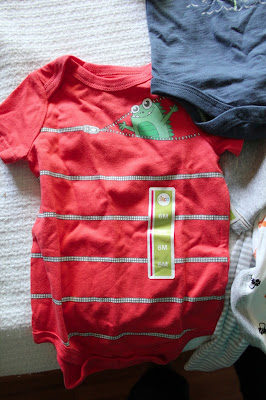 And btw I am not one of those moms who's going to be buying gender neutral stuff. I get why people do that, but I can't stop myself from buying stuff with dinosaurs and cars on it.

I should be posting photos of my baby bump, which is considerable, but I don't know ... I just feel weird about it. I don't really feel cute and it feels VERY strange that all of a sudden it's OK to have a really big stomach, after years of sucking it in and cutting out carbs and all that. Also, my stomach seems so big already, I'm a little terrified of how much bigger it's going to get.

I'll get over it, probably. I posted one bump pic on Instagram and will probably post more there for the time being (there's a link in the sidebar if you want to follow me).

Next up in the preggo timeline is the glucose screening (please oh please do not let me have gestational diabetes), and I suppose at some point I will register for stuff and have a baby shower. Is this real life?