It's nice to have reached an age when the prospect of hanging out with a group of women I don't know is no longer frightening. At some point (probably the point that I became old), women became friendly and it was like we could all hang out and just drink wine and cackle in our sweatpants. Is it because we're in our 30s now? Is there something about a woman's 20s that make her insane? I think this is possible.

In any case, my friend Suzanne invited me over Saturday night to watch the Miss America pageant. Which is kind of funny, huh? And there were a bunch of ladies I didn't know who were there, too, and there was really good food and wine and we laughed a lot and it was FUN. And I'm not just saying that because I ended up winning $40 by earning the most points via my choices of the best competitors in each category.

Women are vastly different animals than men, and I think it does it good to hang out with our own kind now and then.

I brought wine and these certain treats to the party ... 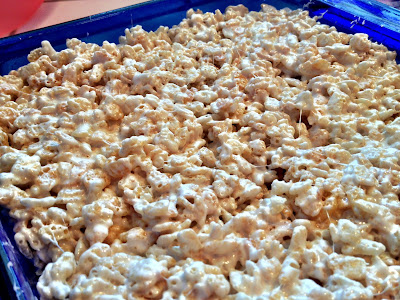 I know you're thinking, oh cool, rice krispie treats. And indeed, that is what these are. EXCEPT for they were made using Smitten Kitchen's recipe, which means you double the butter, brown it, and add a little salt. Once you taste them, you basically decide you know how you want to die: By eating these until your stomach ruptures.

All but one square got eaten at the ladies' gathering (no one ever wants to take the last one!), and when I returned home later, my husband and his friend had eaten most of the other pan I'd made for them so they wouldn't feel sad that they were missing out on gooey sweet buttery deliciousness. It was an impressive feat.

So in all it was a successful evening and I've decided I need more of all of the above in my life; lady-time and rice krispie treats.