The Bachelor, Ep. 3: Let's take this to the next level 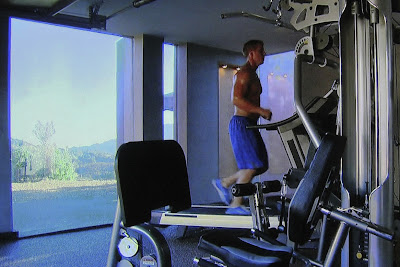 Now on to Date #1 with Lesley M, who is ready to "take it to the next level." Idea! Every time someone says "the next level" on this show, we drink. Also, "I'm here for the right reasons."

Each time Sean goes on a date I feel like it is the worst date I have ever seen. Until we see the next date. So, on this date, they're at the Guinness museum and have to perform the longest on-screen kiss while something like 200 people watch them, and I'm feelin' like this is the worst date ever. They then proceed to press each other's faces together really horribly. All I know is if someone tried to give me the stiff-lip for three minutes and 16 seconds, I'd karate chop them in the neck.

True story: During this kiss, my cat Simon began licking his butthole and did so for longer and with more passion than these two.
Later on when they're not performing heroic feats, Sean slips her some actual tongue and gives her the date rose. I honestly don't think she's as into him as he is into her. Thoughts?

Ok, Date #2 is the group date with 12 women. This one also looks like the worst date ever, as all the women have been shoved in ill-fitting sports bikinis and forced to compete for the second half of the date. The losers go home. 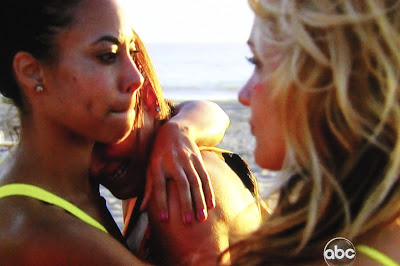 Our model, Kristy, is upset. You know what I think really tears these girls up? That their looks can't save them for, like, the first time in their lives. Disappointment is a real slap in the face, dudes. 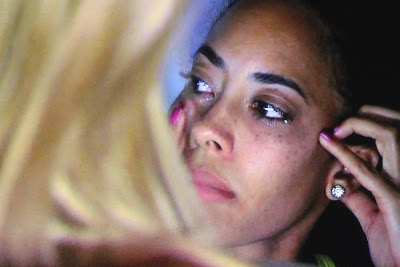 "I just wanted some time." That should be another phrase we drink to. 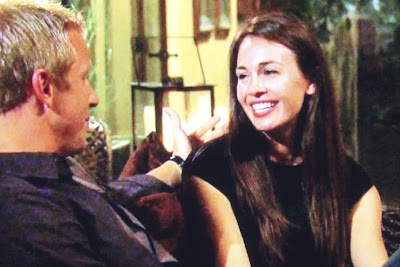 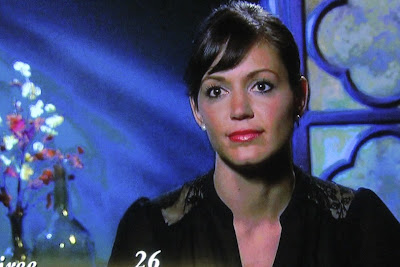 And Desiree is like, yeah, Amanda is psycho. Word. 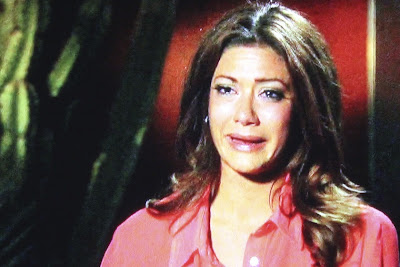 And then Kacie, the brainiac, gets the splendid idea to tell Sean she's "caught in the middle" of Desiree and Amanda because Desiree doesn't like Amanda. And Sean is like: how are you even in the middle? Why are you even telling me this? You are acting crazy. And then Kacie is like: dude, my dumb plan totally backfired. Kacie. Go to therapy, dude.

On the group date, Sean ends up giving Lindsay the rose. She's the wedding dress chick? Whatever. She's not gonna last.

OK now for the moment we've all been waiting for -- when Tierra "falls" down the stairs. For starters I just want to say that ABC was really misleading in their previews, because their editing made it seem like she'd been pushed. They dubbed the sound of Tierra crying and saying "I hope you're happy" or something like that over the image of her lying on the stairs. Which is really dishonest and I'm not sure I approve.

All right on to the nitty gritty. 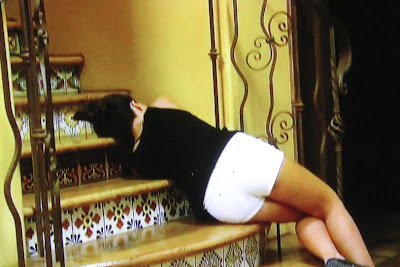 That is some graceful stair-falling, dude.

So here's the deal. Tierra put on a cute little mesh top and a full face of makeup and then banged her hands on the walls to make it sound like she'd taken a tumble. Do you see those stairs? If you fell down those, you would be seriously injured. 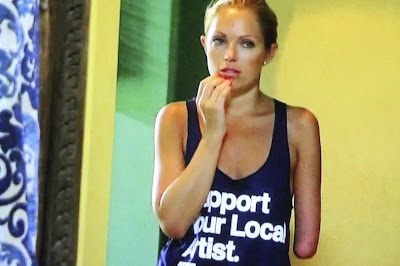 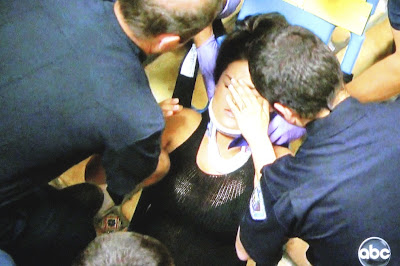 So of course they call an ambulance, and the paramedics put her on the stretcher and then she INSISTS she is suddenly fine and coherent and refuses treatment. Red flag, dudes. 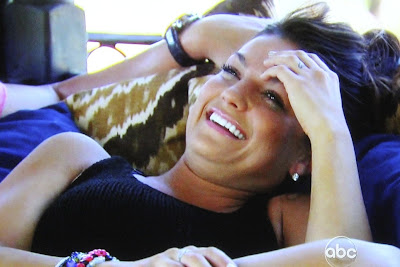 Then Sean is hanging out with her and she is right as rain. No problems whatsoever now, whereas moments before she'd been supposedly unable to answer even basic questions. Uh huh. Sure. 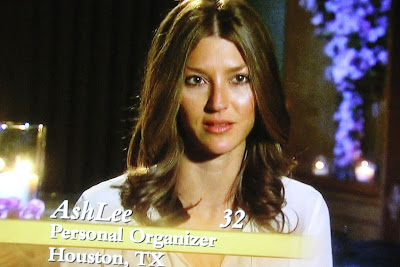 Meanwhile, all this Tierra-falling-down-the-stairs nonsense is horning in on AshLee's date, and AshLee ain't buying Tierra's story. 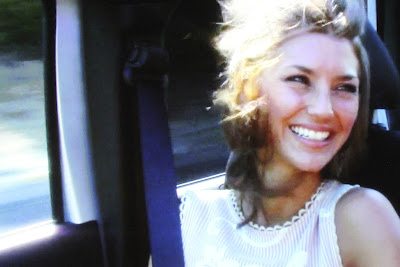 And then Sean ruins AshLee's hair in the convertible.

They head off to Six Flags, where they hang out with a couple girls who have chronic illnesses for a while, which is nice and all but kind of a crappy date. Although I suppose if he was going to go on this date with anyone, it should be AshLee, since she was a foster kid who was abused and then finally adopted at age 6. When she told the story about when her adopted dad met her Sean teared up and so did I. She's probably my favorite at this point but I don't think she's gonna be the one. 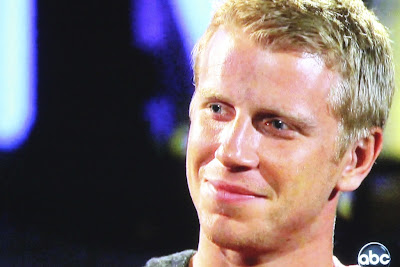 Sean getting a little misty-eyed 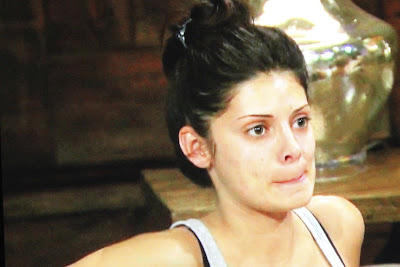 Ok I don't know where this picture fits into everything, I just thought it was weird how different Selma looks without makeup.


Now it's time for the cocktail party ... 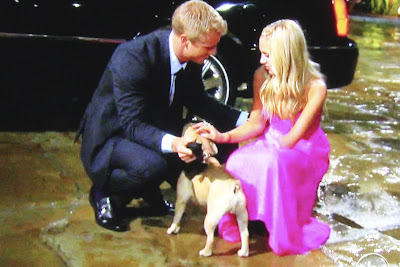 ... at which Sean surprises Sarah with her dog. Nice. 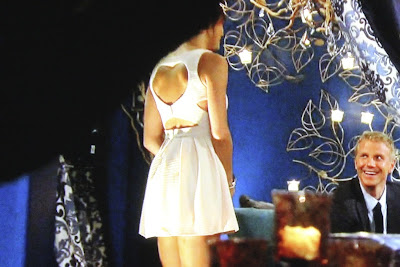 And Desiree wears a cool dress. 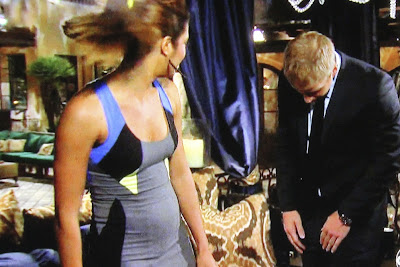 And Kacie B wears ... I am not sure what. I don't think I like it, though. Anyway, she gets eliminated for being a dumbass, and then Kristy (the model!) and Taryn are also eliminated.

Next week I think Catherine and Leslie are going to get more screen time. Mostly I just want to see what shenanigans Amanda and Tierra get up to, though.