Chris Harrison said this was going to be the "most dramatic and most disturbing" Bachelor Pad finale ever (in the show's short three-season history), but he forgot to mention "most hilariously awesome." 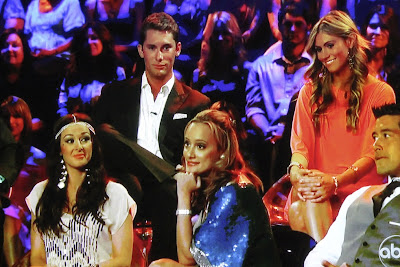 For starters, Chris H introduced each cast member to the audience, and each cast member received cheers except for Jamie, and I have to believe it's because when they showed her in the get-up she had on people were either like: Who is that? OR What the HELL? I'll touch more on this shortly.
In the above photo, Erica is smiling innocently after telling Lindzi to be careful because Kalon's been seen around town with other girls. If looks could kill, I think Kalon and Lindzi's laser-beam death stares would have made Erica's head explode. 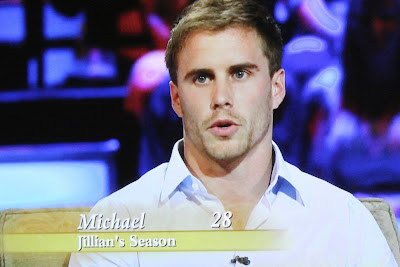 Michael received the most cheers, by far, but ended up turning the audience against himself when he was in the hot seat. They show a clip of him telling Erica he wouldn't date Rachel once the show was over. Then he calmly explains he wasn't here to find a wife and he's just not that into Rachel. Jaclyn tells him he's full of shit, and I gotta agree. He acted like he was really into Rachel on the show, but I have to suspect that he was just using her to get to the end. 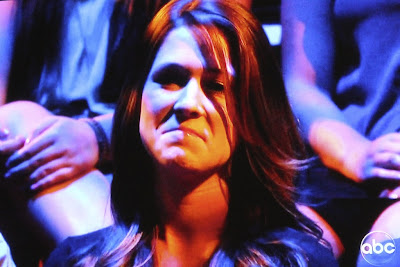 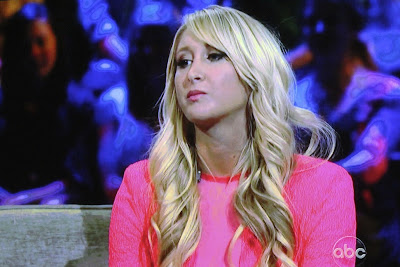 Now Jaclyn's in the hot seat. She says she thinks she was the real puppetmaster of the game (not Michael), but who really cares? She's also still pissed at Rachel for voting her off since they're supposed to be best friends. 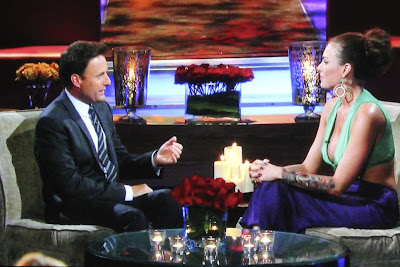 Now for Blakeley, whose outfit is The Worst. She seems to have a new sleeve tattoo as well.
She discusses her relationship with Tony -- they're still together. 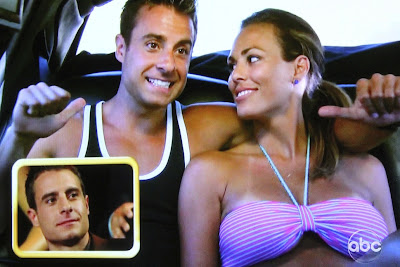 Tony's doing the whole "who has two thumbs and just got kicked off Bachelor Pad but got the girl? This guy!"
It's embarrassing, but endearing. 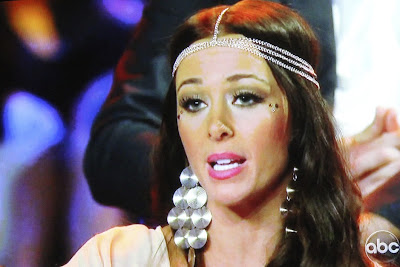 Now it's time to talk about how Jamie and Blakeley didn't get along, except who cares because what the helllllllll is she wearing? I say this is too much even for Vegas. My husband says she looks like she's going to a Pocahontas contest. All I know is she looks straight-up insane. 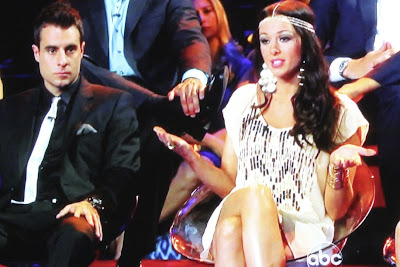 Here it is with the outfit. My opinion: The thing on her head has to die in a fire, and so do the sticky jewels on her face. She'd still be wearing too much makeup, but then at least she wouldn't look like she fell off the crazy train.

Now back to Blakeley and Tony. 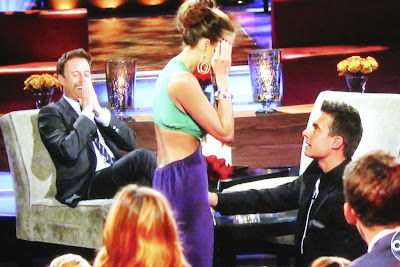 Tony up and proposes. It's very cute. Chris H. is tickled. 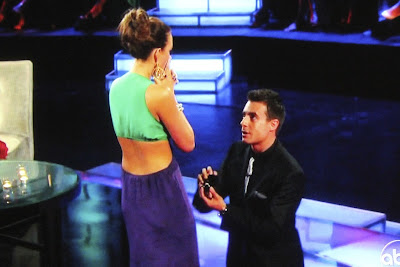 She said yes and soggy audience members were wiping tears from their eyes.
They are an odd, yet weirdly appropriate couple.

Now let's get down to brass tacks, shall we??

Rachel, Nick, Chris, and Sarah come tromping out and sit down for a little talk. 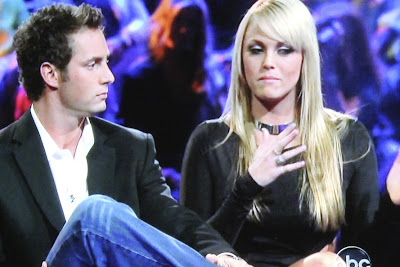 First, Rachel is like, "Me! It's all about me!" She had to go over the whole "why didn't you want to be with me" thing with Michael, which is just embarrassing, dude. If a dude dumps you, you really want to re-hash that in front of a national audience? What is the best possible outcome here? She does end up revealing that despite telling her he didn't want to be in a long-distance relationship, Michael is now in a long-distance relationship with some other chick. I couldn't care less.
Meanwhile, Nick is like: I'mma feign interest here for about another ten minutes before I blow this shiz up. 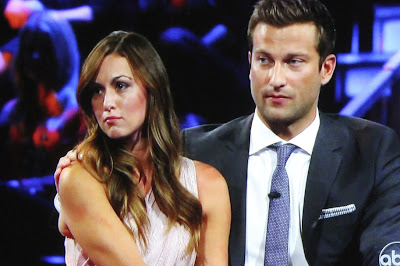 And then Chris is all like: Boohoo my mommy and daddy are disappointed in me for being a douche on the show, so I don't want to hear it from you guys. This guy really rubs me the wrong way. He's just such an ass. Anyway, other cast members yell at him for a little bit. Jamie tells him he'd have been a bad father to Ricki, which is a stupid thing to say because it makes her look petty. 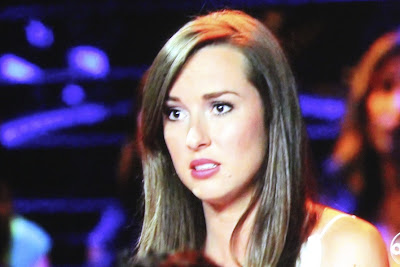 WHO DAT?
j/k that's Paige, I think. She got kicked off HELLA days ago.
She wanted to yell at Chris, too, for whatever reason.

Now it's time for the cast members to vote for the pair they think should win. Michael and his guilty conscience vote for Rachel and Nick, of course. And so does everyone else, pretty much.

So then what happens next is Rachel and Nick have to decide whether to share the money ($250K) between themselves, or try to keep it all to themselves. If one of them chooses "keep" and the other chooses "share," the one who chose "keep" gets to keep it all. If they both choose "keep," the remaining cast members get the money. If they both choose "share," they share it (duh). 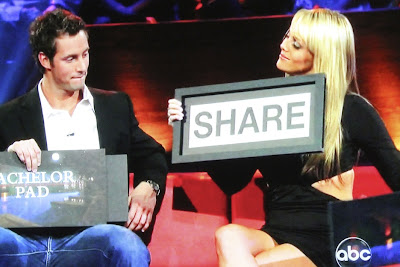 What I really love about this photo is the look on their faces.
Rachel has obviously chosen to share the money.
Now it's time for Nick to reveal his decision.

So he starts talking about how Rachel never wanted to be his partner and she tried to leave the show three times because she was soooooooo freaking upset when Michael got kicked off the show, which was really dumb and immature, and she never gave two shits about how it would affect Nick if she left. Which is true. 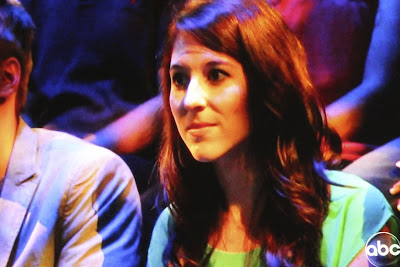 And the audience is like: Oh hell yes I think this just got good. 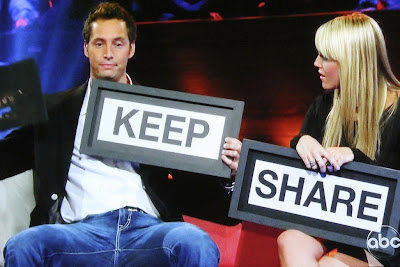 So Nick's like: I'mma keep it.
At which point I started laughing hysterically. 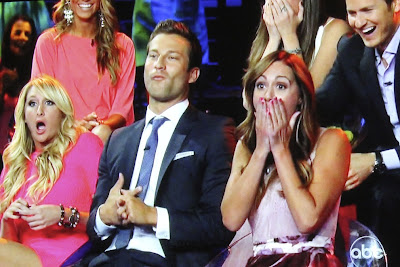 Reid and Lindzi haven't been this entertained in AGES. Chris is like Oh, dayum. 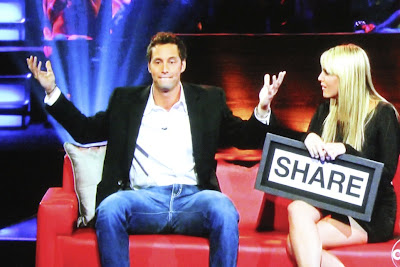 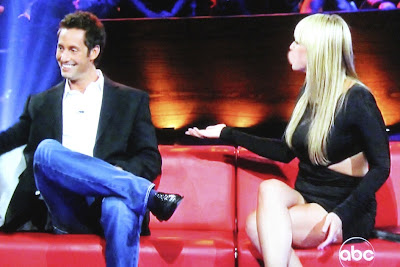 Nick is verrrry pleased with himself, and rightly so. He ninja'd the shit out of this.
Everyone on the show treated him like a pile of dog crap, and why should he treat them any differently? 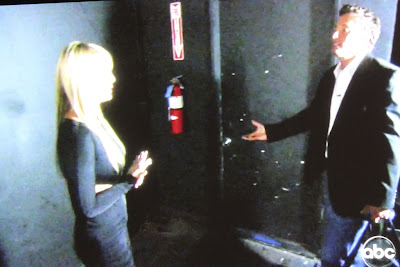 And then I guess this becomes the Maury Povich show because then Rachel runs after Nick backstage and demands he explain to her (even though he JUST DID) why he did this. And he's like: Because it was alllll about you, sweetie pie! Now if you'll excuse me, my bags are packed and I have a plane to catch to the Bahamas. Toodles! 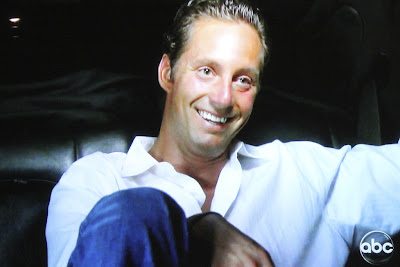 Pleased as punch in the limo.

During the credits, they show all the other cast members talking crap about Nick during the show. Like they didn't know who he was and thought he didn't "deserve" to be there. As if any of them do! Hilarious.

Now here's an interesting tidbit for you. I read in an article today that Nick plans to return home to Tampa, Fla., and continue his career as a model and actor. He wants to be a TV host some day (shocking. Who doesn't? And why does everyone want to do this?). BUT! He's going to use some of his winnings to invest in a restaurant being started by Chris Bukowski. It's described as "an all-female sports bar and restaurant." I assume this means all female wait staff? Like Hooters. BARF. Ed is also reportedly investing in it -- yeah, color me shocked. These dudes are all known for their impeccable judgement, right? Ha.

Also, the next Bachelor starts up in January ... no word yet on who it is. Ryan Lochte is reportedly out. Contenders seem to be Sean and Arie from Emily's season, or Roberto, Ali's ex-fiance. She's not thrilled about the idea, unsurprisingly.

Meanwhile, methinks I'll take a little hiatus from reality-TV recaps!
Posted by Erin at 9:30 AM