the bachelorette: the final rose

Ok, this will probably be long. I have a lot of photos and a lot to say. Oh boy, do I. 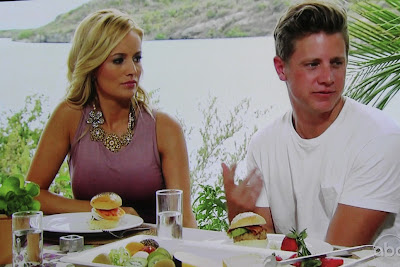 Jef sweet-talked the whole bunch. He made her mom's "heart happy." 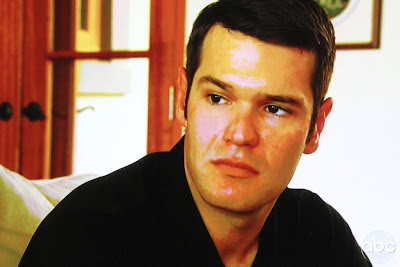 Her brother (who talks out of the side of his mouth like a cowboy with a wad of chew) sees "potential." And finally, Emily's dad gives his OK if Jef wants to propose. 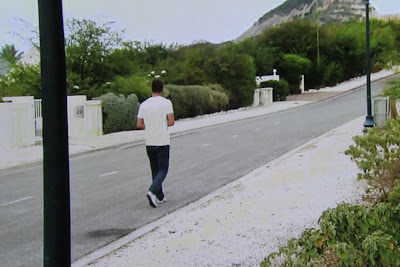 He was a leeetle bit casual for a meet-the-parents, but such is Jef. Too cool for school.

I always feel a little sorry for the second person to meet the family, because the first person usually leaves such a good impression that there's no room in the family's heart for a second. Emily's dad even says after meeting Jef, "I'm not sure why we're going through all the actions of seeing another guy today." 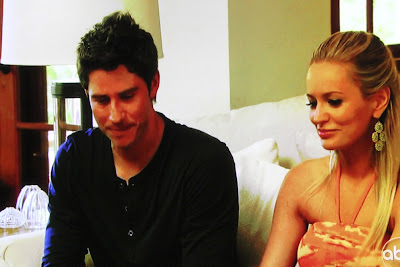 But, Arie blew Emily's mom away. She says she loves both the boys. Brother Ernie says, "I'm confused. I had my mind made up before I met Arie." And dad gives his blessing, again. He tells Emily "I don't believe you can love two people at once," but Emily disagrees. She still has no idea who she's going to choose.


Now it's time for the last dates before the final rose. 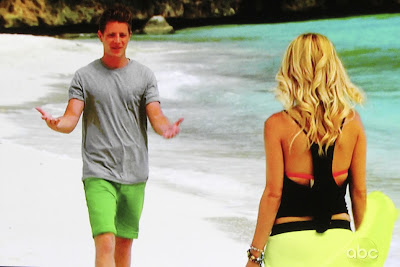 They meet on the beach. She admits she's stressed about her big decision. He says he's not because he feels so sure, although he REALLY wants to meet Ricky.
Now, here's what I think really sets Jef and Arie apart. Jef practically insists on meeting Ricky before the final rose, whereas I don't see Arie doing that at all. Jef realizes it's kind of a huge frigging deal to propose to a woman, and that he should probably have at least met her kid, first.
And he says all the right things: "Just because I haven't met her doesn't mean I haven't been thinking about her every day." I mean, seriously. I die.

So, although she wasn't planning to .... 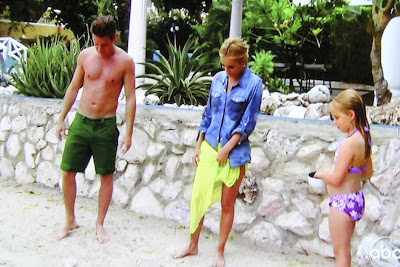 Emily introduces Jef to Ricky. He's a natural with kids, as I'm sure we all suspected he would be. Which is good, because Emily says if the meeting didn't go well, he'd be history.
After Jef left, Ricky asked her mom if he could come back the next day. Ding ding ding! 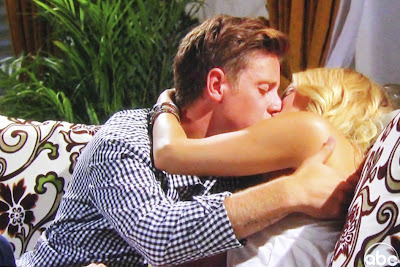 "Today makes me feel like everything I've been through for the past couple months was worth it," says a very impressed Emily. This is sounding very good to me.

After her date with Jef, Em says she had a "sense of peace" about what she needed to do. So she sits down with Chris and tells him ... 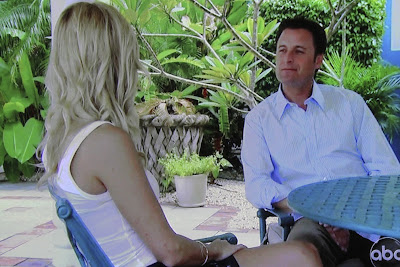 Jef is The One and now I have to kick Arie's ass to the curb!!

And now here is where I gloat. I called Jef as winner on DAY ONE, yo. I nailed it. Without reading a single spoiler. I will tell you how I feel about it. I feel happy that I am right. And I feel happy that I probably won't have to watch Arie paw at Emily's face anymore.

But strangely, I begin to feel sorry for Arie. Shoot. Guess my old black heart still has some pink spots. 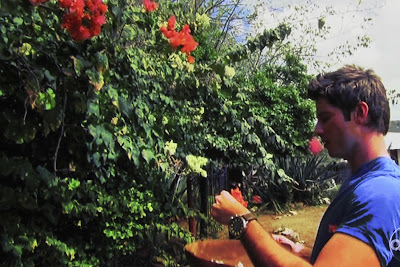 Arie shows up for what I'm sure he expects is going to be a hot-and-heavy final date. He's supposed to make some kind of love potion and I'm like NO STOP NO because he's going to look like a chump, picking flowers and shit. 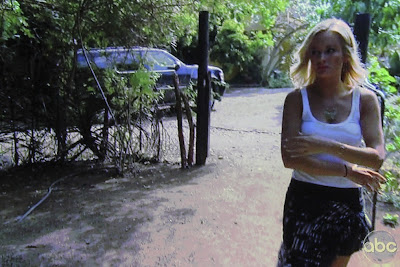 Emily shows up and looks like she wants to vom all over the place. 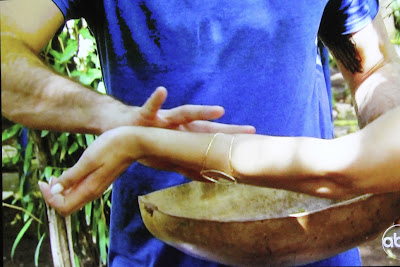 For some reason she lets him smear his love potion on her arms and I'm like NO STOP NO. She shouldn't have allowed that; shoulda just gotten straight down to business.

Now here's where Emily sucks a little bit: at breaking up with folks. She tells them how much she loves them and then they're like, But I'm not the one? And she's like I don't know what to do, and they're like, I'm confused.

She tells Arie she thought he was going to be The One for practically the entire time. 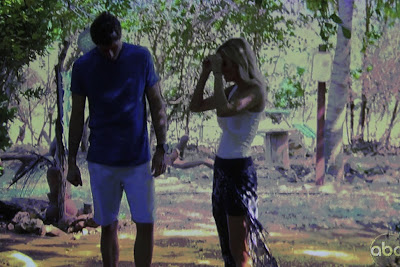 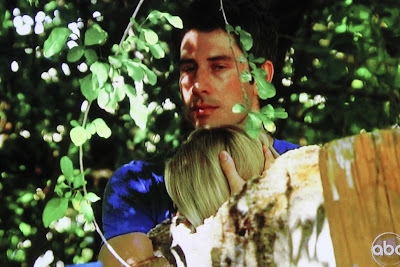 Although he does thank her for sparing him the embarrassment of proposing and being turned down. I mean seriously -- she is pretty classy. That would have been uber humiliating. 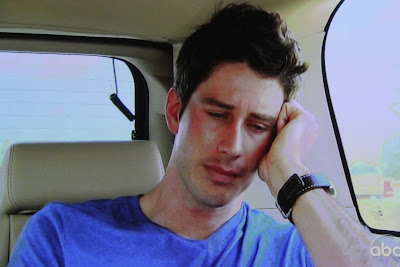 Mad/sad/confused
"I am fucking confused," he says. "I feel stupid. I feel naive ... I feel like I give way more than I get. I still believe that she's the love of my life. That's what makes this so painful." 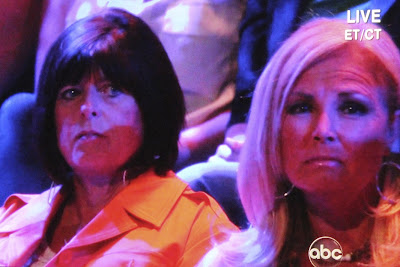 Ladies in the audience feel sorry for Arie. Whaddaya say ladies? Arie as the next Bachelor? 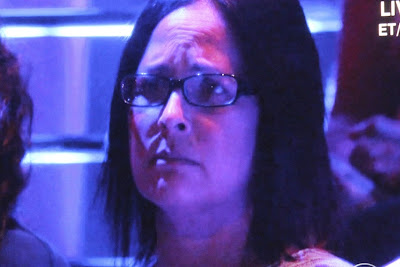 Now it's time to get down to brass tacks. Jef goes and chooses a nice rock for Emily, even though he's still unsure if he's going to propose. It's difficult to propose when your love interest has never actually said they love you. 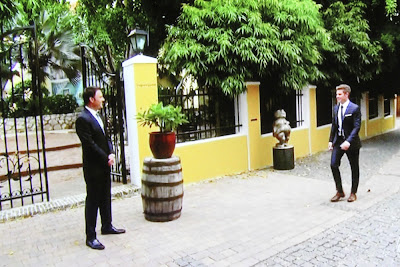 He wears one of his skinny suits to the occasion. Where do you suppose he gets all these skinny suits?
And then Emily tells him she never had a final date with Arie, that Arie never got to meet Ricky, and that, in fact, Arie done gone home.
Oh, and that she loves him. Important! 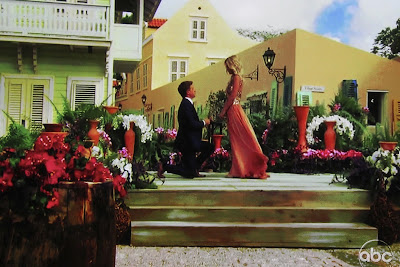 So he proposes! And after about 10 seconds, she accepts.


AND THEN there is a KICK ASS montage set to "Glory of Love," dudes. A la "Karate Kid." 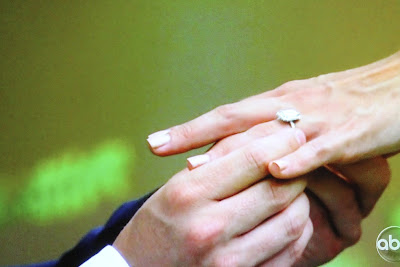 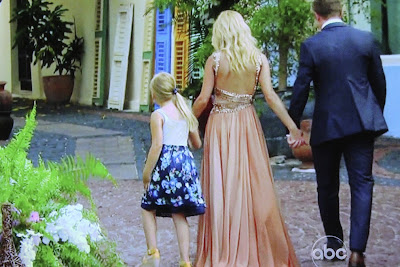 
Can you believe my husband claims to have never heard this song? I'm a little aghast.

Now it's time for After the Final Rose.

So first up is poor Arie.

Who admits that after the show ended, he flew to Charlotte to see Emily, but decided against it when he was there. But, he did leave her his journal so she could read it. So it would change her mind or something? 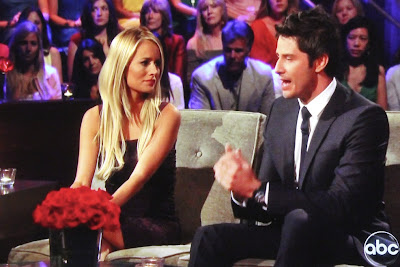 But she NEVER READ IT. I mean, seriously. She hands him the package, all sealed up and everything. Here's the deal, dudes. I consider myself fairly classy, but a dude leaves his journal on my doorstep? I am readin' that shit. Especially if it's all about how awesome I am.

But Emily has outclassed me, it seems. Out of respect to Arie AND Jef, she doesn't read it, and then she returns it to Arie so he can rest assured knowing its pages will never appear on the Internet. He looks visibly relieved.

And didja know he and Jef are good buddies? They, like, talk on the phone and shit? It's odd. 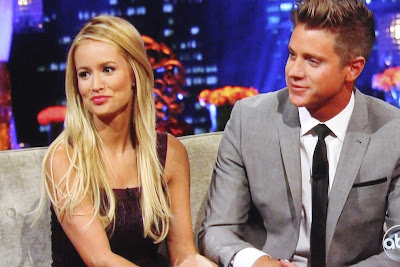 
They sound like they're still in love. She's still wearing the ring, and they've seen each other every weekend since the show ended. They're beginning to plan their wedding, and they'll soon be embarking on a trip to Africa to dig wells for the people there. I mean, are these two for real? I really hope they work out! 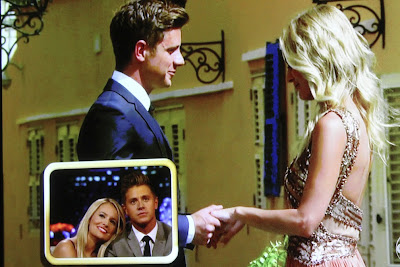 I just like watching their faces in the inset box.

And now an admission. I do have a wee ... fascination ... with Jef. I've followed him on Twitter and Instagram, and I have to say that although it makes me feel creepy, I am glad I did it. Otherwise, how would I know he calls Em his "Panda Kitty" (I mean are you serious) or seen this photo: 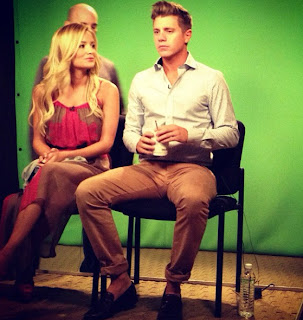 I know. It's a little stalker-y of me. This is Jef and his Panda Kitty on GMA today.
Photo done got stolen from Instagram.

He doesn't have much to fear. Bachelor Pad starts tonight and I also have an unhealthy "like" for Reid. Til then!
Posted by Erin at 10:01 AM