the bachelorette, ep. 9: exactly no one is surprised

They're in Curacao. We spend eight minutes on recaps of each "relationship." I fast forwarded through this and feel 100 percent certain I didn't miss anything vital. I have been watching this drivel all season. I don't need to be reminded of things I have already seen, like some kind of drooling lobotomy patient.

Sean is our first victim. He's the only one who hasn't said he loves her. They go to a private island. They talk about his ex-girlfriend, whom he treated like a "buddy." I feel simultaneously annoyed and bored. They snorkel. Yawn.

They go to dinner. She asks him how he feels. He pulls out a letter he wrote to Ricky. It's very sweet. He finally tells her he loves her.

And then she hands him the invitation to the fantasy suite. 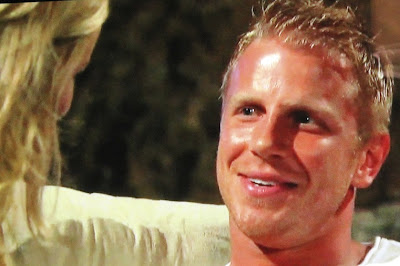 He can barely contain his happiness. I'm not sure what he thinks is gonna happen, because what we find out is that for the first time in the history of this show, Emily will not spend the night (aka have sex) with these guys. There will be no trying before buying. She is trying to be a good role model and mom. I think it's admirable, if a little unentertaining. 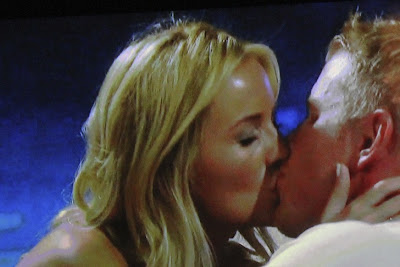 She calls him hot and manly and then kicks him out of the fantasy suite.
He presumably goes back to his room for a cold shower.


Now to my favorite part: Jef.

They take a boat. He tells her his parents, who were skeptical at first, want to meet her. 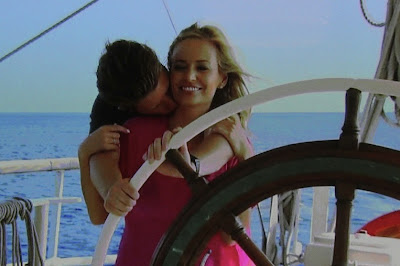 "She is the most amazing, beautiful girl ever," Jef says.
He kisses her on the neck. I die. 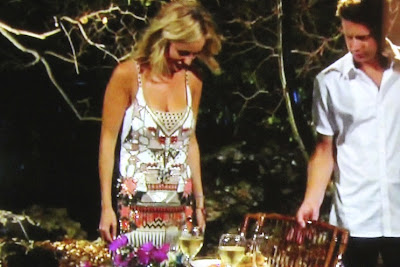 I'm a little creeped out by his Mormon missionary shirt (husband says "he's on a mission to get into her pants!") but I'm loving her dress.

She tells Jef she would move wherever he wanted to live and that he's the first guy who popped into her mind when she was trying to imagine which guy would be a good father to her daughter.

And then HE says they shouldn't do the fantasy suite! YAWN and BOO and HISS. Something about "bridle these passions," blah blah blah I can't believe this show is two hours long.

Now it's Arie's turn. They're also on a boat. There are dolphins. Arie and Emily are kissing too much; it's yucky. 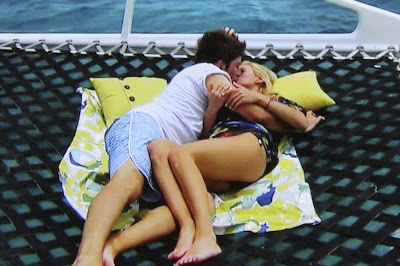 He tells her on a normal day he gets up at 9 (HA!) and then gets home around 6 and has dinner out with friends. Oh boy, life with Emily would be far different. She tells him she'd be OK with moving to Scottsdale. She calls him her "light at the end of the tunnel" -- I am not happy about this.

And then she refuses to even show him the invitation to the fantasy suite because SHE DOESN'T TRUST HERSELF NOT TO SLEEP WITH HIM. This means one of two things. He is either the winner, or he is just the one she wants to sleep with the most. Or both.

We spend about 45 minutes watching her hem and haw about who to cut (COME ON, IT'S SEAN, WE ALREADY KNOW). I reminisce about the days when shows that were 1 hour long were considered excessive. She watches heartfelt videos of the men with a pained expression on her face. My brains leak out of my ear holes.

"I feel kinda stupid, only because I knew with certainty ... I knew I was ready to spend forever with you," Sean tells a tearful Emily. "I think you should know it's gonna hurt me."

She tells him: "I wanted it to be you so bad." Here's why it wasn't: He's like a big puppy, and he can't kiss. That's just my opinion, of course.

I'm guessing Sean is the next Bachelor. We shall see though. He handled his exit like a man. He was obviously upset, but there were no tears.

For the preview of the final episode, there's a lot of hinting at her "betraying both of them." Chris says: "Your mind is made up here. You are done." This implies she is incapable of making a decision. I'm not falling for this, you sly bastards!! It's Arie. It's got to be. Even though I really hope it's Jef.

Next week is the Men Tell All. Should be hella boring, but I'll recap anyway. Toodles til then!