Escapism is where it's at, yo.

I've been tearing through novels, and have stumbled across a few I really liked. Here are a few mini-reviews if you're looking for a good read. Don't forget to suggest new reads for me! 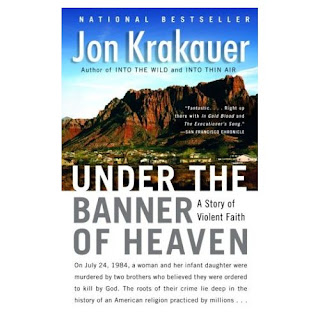 I really loved Krakauer's earlier novels and those are definitely worth a read if you're into fascinating nonfiction. So I thought I'd really love this novel as well; I love Krakauer's work and cults are fascinating, so it seemed like a winning combination.

This is a good book, but I had a couple small issues with it. The first is that it focused really heavily on a double-murder carried out by these fundamentalist Mormon dudes. It went into graphic detail (unnecessarily, in my opinion) and kind of made me feel ill. The second issue is that, while I allow that Mormonism is crazy, I feel like Krakauer almost randomly chose a religion to pick apart and deem "violent." It could be argued that all religions are violent; it always depends on how the members feel like interpreting their holy texts. And it could be argued that the more ancient religions have been the very causes of millions of murders. In the grand scheme of things, I'd say Mormons have some catching up to do.

Still, it's a fascinating read if only for its history of the religion. Really, really interesting stuff. 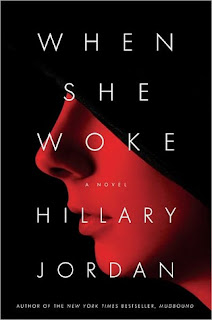 When She Woke envisions a future in which criminals are punished by being injected with some junk that turns their skin a different color; which color they are depends on their crime. So right away you're already touching on the heavy issue of racism/bias based on skin color. But wait, there's more.

Jordan has decided to tackle the sticky issue of abortion; our heroine lives in a world in which it's illegal. It's fairly clear how she feels about it, but she has an interesting way of getting to her point. I'd say that regardless of that portion of the plot, it's a fast-paced read that's somewhat reminiscent of The Hunger Games, with a bit of a Fugitive twist. And this book seems to take place a couple hundred years into the future, and I'm always entertained by what authors envision happening. 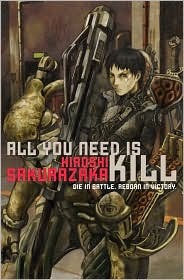 I mean, how can you not read a book called All You Need is Kill? In truth I'm not sure I'd have read this book if I hadn't read that it's being made into a movie. Unfortunately, the movie is going to star Tom Cruise, which I think does the book a major disservice if they're planning to make him the main character. That's because the main character is an 18-year-old Japanese dude.

I've also heard Emily Blunt is going to be in this movie, and I think that is decent casting (although what's weird is that she's going to be in that time-travel movie with Joseph Gordon-Levitt and Bruce Willis, too -- lots of science fiction on her plate right now).

Anyway, the premise of this book is that aliens have invaded and war has been waging for decades on Earth. One particular soldier has joined the army straight out of high school and after six months of training is going to fight his first battle. Except he dies in his first battle. Except then he wakes up again the next morning, except it's not the next morning; it's two mornings prior, and he's got to fight the battle again and again, sometimes dying, sometimes not. It's like Groundhog Day except 500 times more violent.

He's becoming almost as good a fighter as their best soldier -- a woman they call the Full Metal Bitch. It's a really well-thought-out tale with no loose ends; I admire that because it's extremely easy to have loose ends in a novel about aliens and future technology. It's a very fast-paced read, and I gotta say: I loved it. I gave it 5 stars on goodreads.


Right now I'm reading Gone Girl, and it's fantastic. I have no idea what's going on or what's going to happen, and I love that. And it's very well-written, to boot. I'll review it once I've finished it.

Have you read any of these? What'd you think? What should I read after Gone Girl?

Email ThisBlogThis!Share to TwitterShare to FacebookShare to Pinterest
Labels: all you need is kill, books, gone girl, under the banner of heaven, when she woke