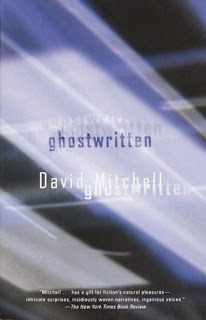 This is a debut novel (from 1999) that the author received a lot of accolades for. He's amassed a dedicated following, and I understand why. But his stuff isn't my style, and I don't particularly care for it.

What I'm mainly searching for when reading fiction is a character I can identify and empathize with; someone I hope doesn't get killed off; someone I'm hoping the best for. I didn't get that from this novel because there are nine main characters, some of whom aren't human.

Each character gets his or her own chapter, and all of their stories are cleverly interwoven. I can appreciate the research that must have been involved in writing about a number of characters who live in different parts of the world, like Tokyo, Ireland, Mongolia, Russia, and London, and then delicately weaving their stories together. And I think I get what Mitchell was after: Do we deserve to survive? My answer is: Probably not. But then I have a question: Why should I care about this book? Because I don't. I mean, I start to care about each character, but then they're gone when their chapter is up. It's actually kind of annoying.

Also, I feel like I've been reading book after book that involves real or fictional Japanese cults. Which is fine. But I think I'd like to move on to new material. Of course, it's really my own fault if the books I read include Japanese cults. And actually, interestingly, a man believed to be involved with the nerve-gas attacks on the Japanese subway in 1995 was just arrested a few weeks ago after years on the lam. It was actually fortuitous timing on my part to have just read this novel and this guy to have been arrested. I will say: I certainly learned something as a result of reading this book. The problem was I wasn't entirely entertained.

Now that I've panned it, I want to reiterate that tons of people really love this book. Also, as I always say when I've read a book I didn't particularly care for, this author deserves credit just for writing this damn thing. It is blessedly coherent and logical and doesn't seem to have any loose threads, and as someone who's just written a novel with about 2 million loose threads, I say kudos to Mitchell.

Have you read this novel? If so, what'd you think? What are you reading right now? I'm reading "Under the Banner of Heaven" by Jon Krakauer, and "Awaken the Giant Within," by Anthony Robbins.