This episode, the group is in Bermuda.

The first one-on-one date is with Doug. 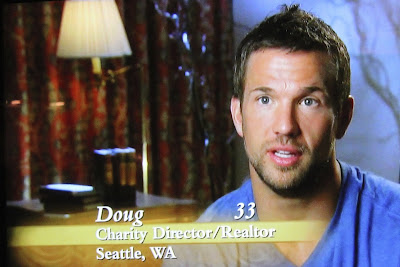 So here's the thing about Doug. He's a great guy, super-nice and all that. But what you see is what you get, and what you get might be a little boring. I don't see him going all the way to the end.

1. He says his ex-girlfriend would list his faults as A) Hanging out with his son too much and B) Not washing her car enough. I simply can't tell you how many men I've dumped for low car-washing frequency.

2. He says he NEVER makes the first move. You are a man. Man up. 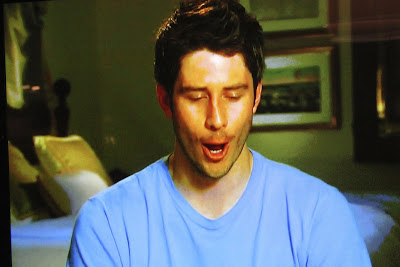 Arie revealed kind of an ugly side this episode, as he teased Doug mercilessly about being nervous for the date. Here he's comparing Doug to the Hulk. "Doug sad."
Actually, Arie was pretty much a douche this episode. I hope he's not the one. 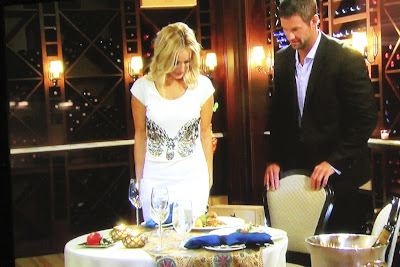 I just liked her dress.

Next up was the boring-ass group date. The men had to have a sailing competition and the winners got to spend the rest of the evening with Emily. 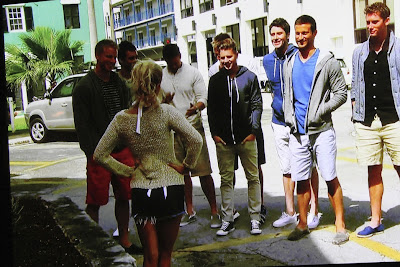 I am still not a fan of those cutoff shorts. 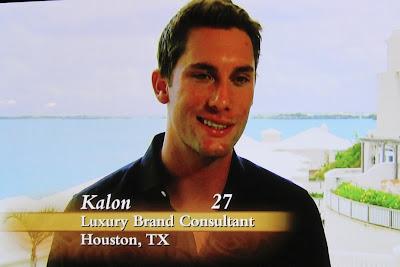 Kalon says with sailing, he's in his element. Because he's rich and stuff? And rich people sail? Also he seems incapable of NOT smirking. 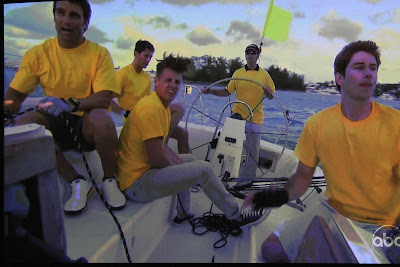 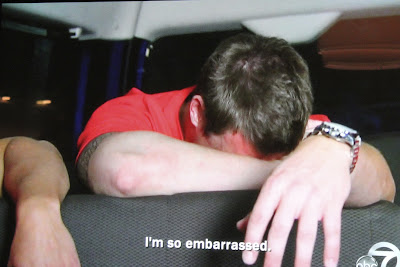 
Ryan manages to call Emily a trophy wife during the second half of the date, thus setting the scene for much more douche-baggery to come. 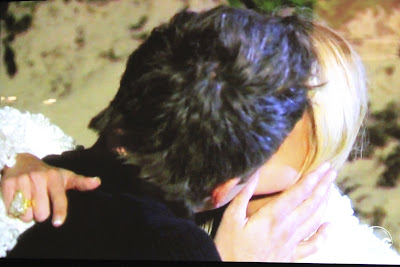 Arie was creeping me out tonight. I can't put my finger on it. I'm not loving him though, guys.
Also, notice her finger gun here. He better not make any sudden moves. 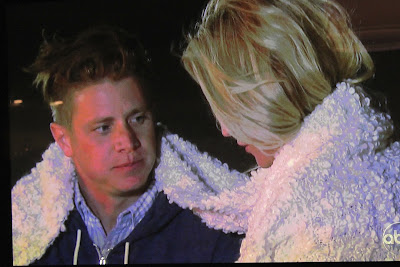 Ok, so many problems with Jef's time here. 1. Why is it so cold in Bermuda?
2. He says "LIKE" wayyyyyy too much.
3. I believe I've managed to capture the exact moment that Jef knows he should be kissing Emily, right before he backs out like a big pussy. Emily is confused. I am confused. He needs to shit or get off the pot.
4. Jef gets the date rose!! Even though Arie is also on the date! And even though he pussed out on the kiss! Dude. Get a clue and kiss the woman.
5. Ryan thinks Emily gave Jef the rose to avoid hurting his feelings by giving it to Arie. This is the kind of dreamland Ryan lives in. 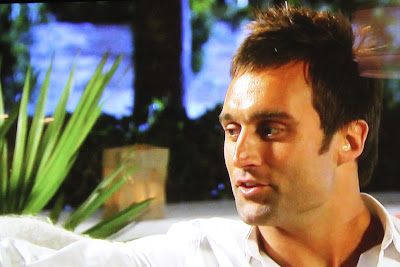 Emily knows Ryan is a giant douche, so now she's just messing with him. She brings up the weight gain thing again. He says he wants her to be a beautiful woman and tells her she is basically letting all teen girls in America down by kissing Arie at the previous rose ceremony.
She says later: "I just feel like he's judging me."

This is the moment I decide I definitely hate Ryan. He's a manipulative chauvinistic asshole. I could go on for paragraphs but I'll leave it at that.

Now it's time for the humiliating 2-on-1 date. You know the one where two dudes she has no interest in go on a date and she chooses the least awful person? 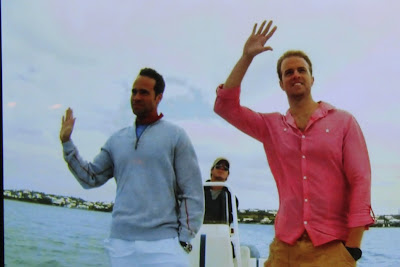 I thought she should have sent them both home since she clearly has no interest in either of them. Nate tears up when he's talking about his friends and family, and later he gets the boot, leaving Wolf with the rose. 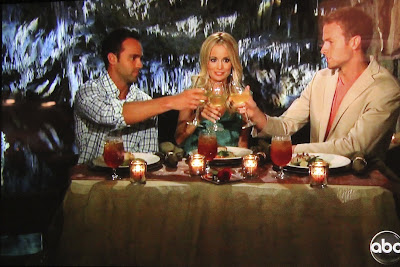 Not awkward at all. 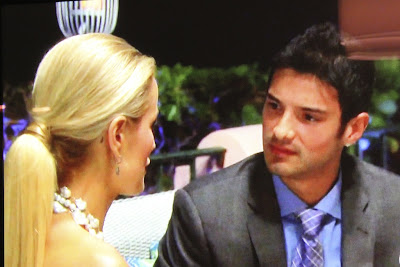 Somehow Alejandro is surviving by the skin of his teeth. She seems to still kind of like him, but honestly is there any way he could be the last guy standing? 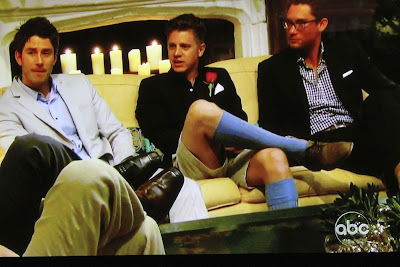 So.
Jef seems to think that because he already has a rose it's OK to wear periwinkle knee-socks to the rose ceremony.
So he basically has the balls to wear this, but not to kiss Emily. Totally understandable.
Also of note here: Neither Kalon nor Wolf are wearing socks. This is more acceptable in Bermuda.

Now somehow Ryan gets more screen time. I'm just going to list the ways he continues to be abhorrent.

1. He tells her just because she's the center of attention doesn't make her worthy of it.
2. He sees "great potential" in her. (Is he not aware that it doesn't get better than Emily? It just doesn't. I'm not sure what planet this dude lives on)
3. He believes he is called to "something bigger" than what's going on here on The Bachelorette.
4. Oh you guessed it. He wants to be the next Bachelor. "It'll be neat for everybody to see" him open his heart?!?! Wow. Narcissism is fun, huh kids? 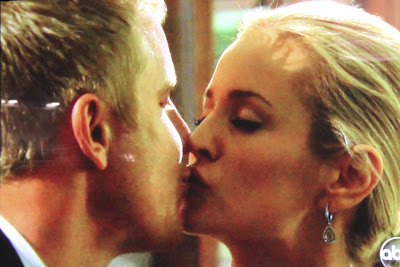 Sean is still in the running, even though his kisses look fricking ... sad. Like, his lips don't move. He's a stiff-lipper, I tell ya. Still, he gets called first at the rose ceremony. 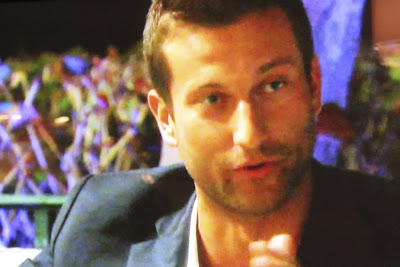 Meanwhile, Chris picks a fight with Doug, of all people, because he's feeling defensive about his age (25). After a while Chris seems to realize he is fighting about nothing, and walks away.

Finally we have the rose ceremony, and the final men chosen are:

Yes, Ryan is still here. At first I was like WTF? But now I think I'm on to Emily. I think she is eliminating nicer guys she's not into as a kindness to them, and keeping dickheads who think she's into them (along with the actual nice guys she's into, of course) sort of as a way to string them along.

Case in point: Our two eliminated men are Michael and Charlie, probably two of the nicest guys on the show. 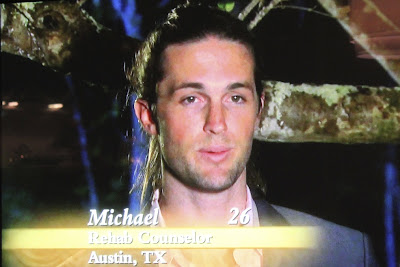 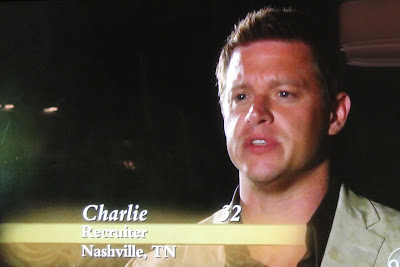 
Next week: London. She's FINALLY going to kiss Jef. And someone is going to call Ricki "baggage" and get booted off the show ASAP. Ryan? Ya think?

Email ThisBlogThis!Share to TwitterShare to FacebookShare to Pinterest
Labels: The Bachelorette