What could be more entertaining than reading a Bachelorette recap two days after it airs? Heh. Well, I can watch only so much TV, and Monday night I had a Game of Thrones episode burning a hole in my Tivo. I'm glad I went with GoT, because phew! All of these manners and polite young men are not making for very interesting television, ya'll.

First up we had the first one-on-one date, with Ryan. Emily had him unloading groceries and baking cookies, during which he proclaimed to be loving every moment, all the while with a dead-eyed stare. Maybe he's botoxed? 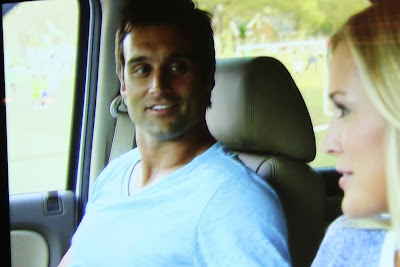 We thought this was a clever date idea on Emily's part; she wants to see how the men do during mundane, everyday tasks, since she's a mom and is going to have to settle back into real life pretty quickly once the show's over. We wonder how Brad handled the mundane? Hmmm.

Anyway Ryan handled it all right, I guess? I wasn't super impressed. 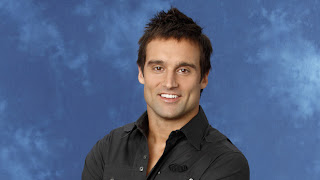 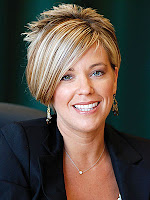 Then they went out for dinner and to listen to some band I'd never heard of while they danced on a small stage and about 400 people stared at them. Which is basically my worst nightmare.

But she was wearing sweet shoes. In fact, her footwear may be the most exciting part of this show. 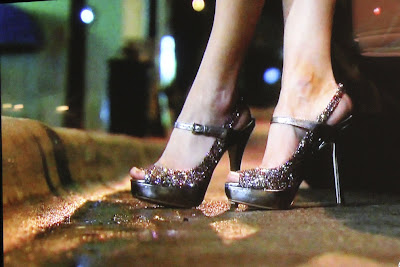 Next up it's time for the group date. Stevie shows up looking like a member of a boy band, and the rest of these douches are doing a fair job of feigning interest. 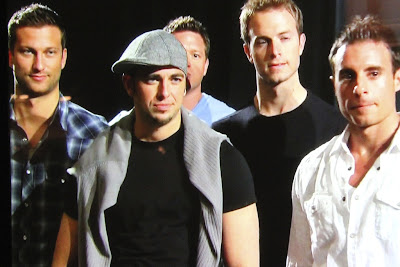 The deal is they have to put on a show with the Muppets, which is really cute and Emily's daughter loves it, yada yada. Charlie (not shown) freaks because he's chosen for standup comedy and he's worried his speech won't be up to par since he apparently hasn't fully recovered from his balcony accident. If this is the case, why precisely did he choose to go on this show? 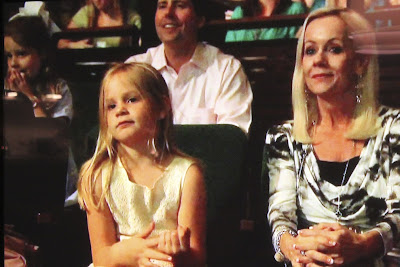 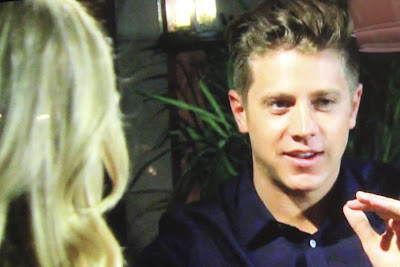 Then Emily gushes all over Jef, who is still, by the way, my top pick! Even though he seems to have lost some of the cool factor. He seemed about -1,497% less confident this time around. Still, he gets the date rose, and he didn't do a single thing to get it. She just likes him, I tell ya. 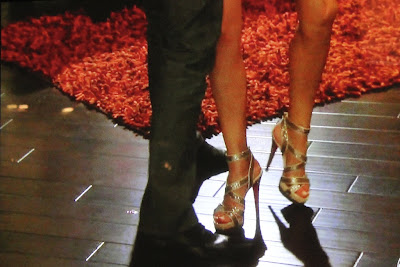 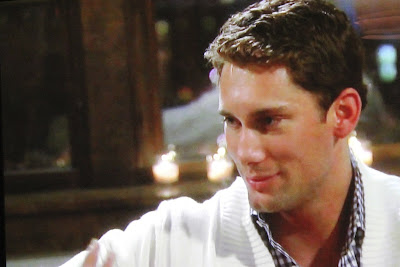 Kalon on the group date.

So, listen. I'm going to say something we're all thinking, and I don't want you to get your panties in a bunch about it. Kalon is gay, you guys. Like, super, uber duper gay. Which is fine. Except he's on The Bachelorette, acting like a douche. Am I right, or am I right?

Next up is our second one-on-one date with Joe. Imma make this short and sweet: They fly to West Virginia to go to some resort, they swim, have dinner, put a note in a "love clock," and then she kicks his ass to the curb, even though she thinks he's adorable and looks like Matthew McConaughey. I guess I see it a little. 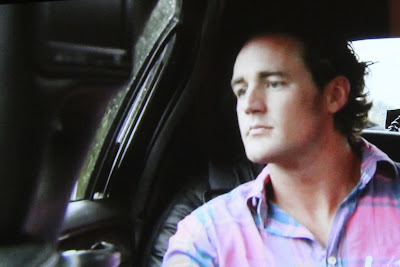 My only issue with the date with Joe is this: Why have him write a note for the love clock if you know you're going to eliminate his ass in about five minutes? Just to ensure maximum humiliation? Meh.

In all fairness, she asked him where he saw himself in five years, and couldn't get him to answer much beyond: "Happy." What does that even mean?!

Then it's time for the cocktail party. 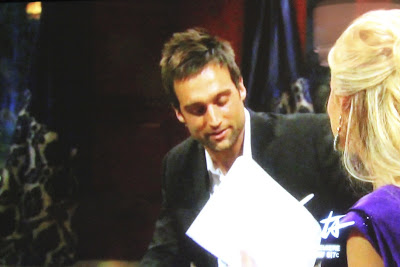 Ryan writes her a SEVEN PAGE LETTER and then she READS THE WHOLE EFFING THING OUT LOUD while TONY STANDS THERE WATCHING/LISTENING.

Anyway, I'm glad at least Tony got to tell her about his 5-year-old son, otherwise I'm not sure how much longer he'd have stuck around.

We have our rose ceremony and Aaron and Kyle are eliminated. 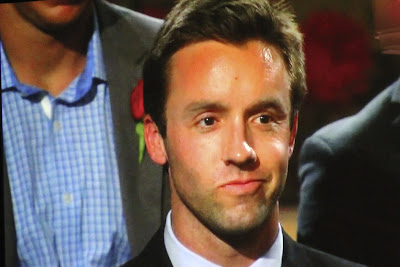 Kyle. Yeah, I forgot about him, too. 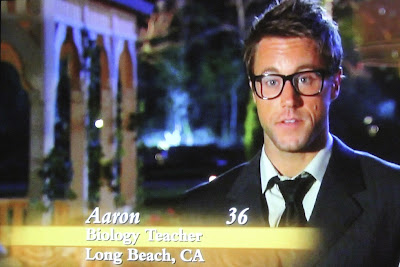 I vaguely remember this dude from the first night. Anyway, those specs gots to go.
I think he's trying to pull a Reid, here, but Reid (Jillian's season) just looks way hotter.

A couple more items of note: 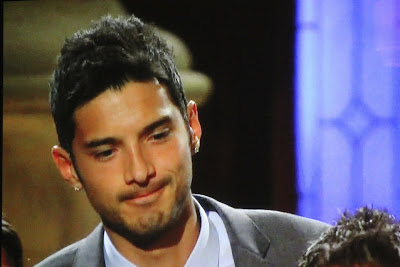 I'm liking the looks of this fellow. Alejandro, I believe it is. Mushroom farmer from SF. His hair's a little too long in the back, but that's what scissors are for. Anyway, I'm hoping he's going to be a dark horse, but I'm not placing any bets on it. 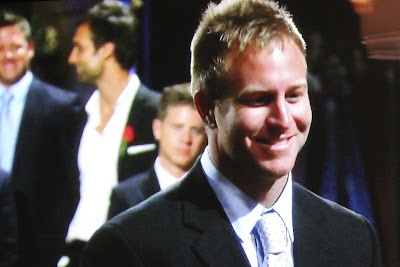 This dude got to stick around. I have no idea who this guy is.

- Kalon's name was called first during the rose ceremony. Methinks someone's gaydar is off.
- Arie's name was called second, and previews show her making out with him in future episodes. I still think it's a bad idea, him being a racecar driver.
- Michael -- the dude with the long ass ponytail -- was called third. At this point I have no idea what the hell is going on.
- There's also footage of Emily tossing the ostrich egg onto the pavement in a future episode. I don't even remember who brought that dumbass thing.
- Yawn.

Email ThisBlogThis!Share to TwitterShare to FacebookShare to Pinterest
Labels: The Bachelorette