Where food is concerned, I'm really more of a winter person. I like throwing a bunch of stuff in a pot, letting it boil, and calling it delicious.

I feel that spring and summer require a bit more creativity. Which is why I subscribe to food magazines that tell me what to make.

So I made this Greek-style Turkey Meatloaf. It sounds weird, but it's damn good. My husband loved it even though it had ground turkey in it -- he doesn't often enjoy ground turkey. He even suggested we eat this meatloaf for Thanksgiving instead of the traditional roasted bird. I told him that's something a communist would say. 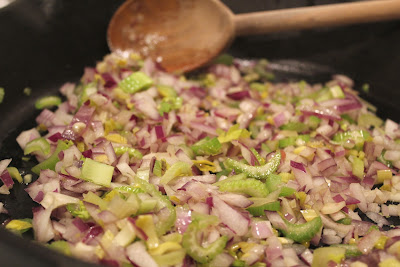 You start out sauteeing some veggies. This is celery, onion, and garlic. 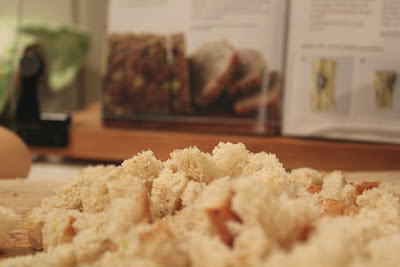 And then you mix the veggies with the raw turkey, an egg, some bread, salt and pepper.
With your hands. Pretend it's brains, if that helps.
Oh, that doesn't help? 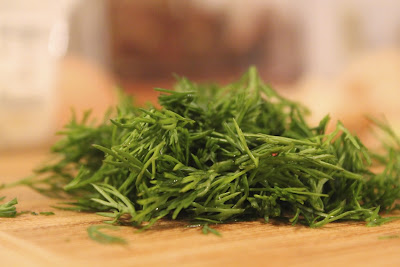 Then you throw in some dill and feta. Hence the "Greek" portion of this recipe.
If you're like me, you're thinking: But I hate dill. I hear what you're saying, Friend.
But it works in this recipe. I daresay it is good in this recipe. 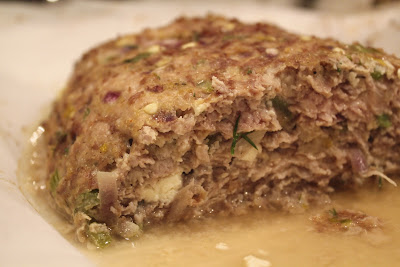 Here's what the loaf looks like once you've slapped it on a pan (with parchment paper) and baked it for a while. It's tender, juicy, and really, really flavorful. 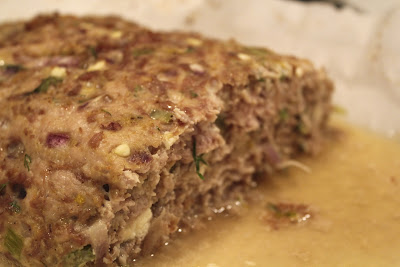 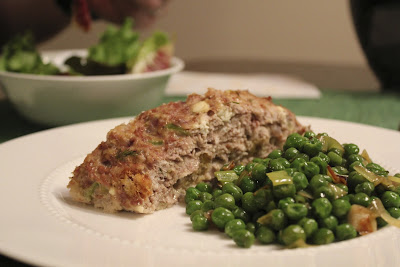 What a proper-looking dinner.
That side dish is sauteed leeks and peas. I'll post how to do that below as well.

Greek-style turkey meatloaf, from the April 2012 edition of Everyday Food

1. Preheat oven to 350 degrees. In a medium skillet, heat oil over medium. Add onion, garlic, and celery and cook, stirring occasionally, until vegetables are soft, 7 minutes. Season with salt and pepper.

2. In a large bowl, combine vegetables, turkey, egg, bread, 1 1/4 tsp salt and 1/2 tsp pepper. Using your hands, mix until combined. Mix in feta and dill. Transfer to a parchment-lined rimmed baking sheet and form into a 4-by-10-inch loaf. Bake until cooked through, 45 to 55 min, rotating sheet halfway through. Let rest 10 min before slicing. (To store, cover and refrigerate, up to 3 days.)


For the sauteed leeks and peas (adapted from Everyday Food, April 2012):

Slice 2 leeks (white and light green parts only) into half-moons, then rinse thoroughly and pat dry. In a large skillet, melt 3 tablespoons unsalted butter over medium-high. Add leek, season with salt and pepper, cook until translucent, 6 min. Add two 10-ounce bags frozen peas and cook, stirring frequently, until bright green and warmed through, abt 6 min. Season to taste with salt and pepper