My husband gets better every year. Like, I'm not sure how or why this has happened. I just know that as time passes, I love him more, and I dare say he loves me more.

And neither of us are perfect. We each suffer from our own special brand of neuroses and are perfectly capable of driving each other completely insane. But as time passes, I gotta say: I am finding his neuroses more and more entertaining, and I believe he finds mine sort of hilarious.

We'll have been married six years on Sunday. 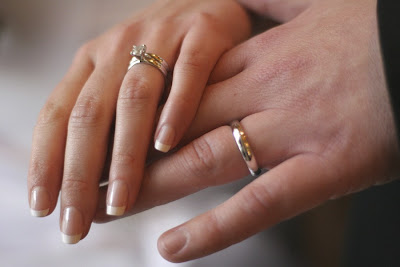 Our digits. He still prefers to remain faceless as far as my blog is concerned.

We've known each other for 16 years. While I can readily remember all of our adventures (and misadventures) together, it's a little hard to believe it's been that long.

In any case, I feel lucky to have ended up with this dude.

He's one of the good ones. He collects friends everywhere he goes. He re-tells these funny stories I know by heart but they still make me roar. He doesn't let me suffer by myself when I've hit a rough patch. He has an inventive imagination. He's a morning person, and a night-time person, whereas I'm just a night-time person. He's the reason I have my bachelor's degree. He pushed me toward my dream and now his metaphorical foot is planted firmly in my metaphorical backside so that I fall completely into it. He gets defensive when I catch him falling asleep on the couch, like I've accused him of something heinous. He gets excited when there might be teenagers smoking dope outside because he enjoys being the scary dude who might kick their asses if they don't leave.

I would keep him around purely for entertainment value, but as it happens I'm rather attached to him as well.

Happy anniversary, my love. Let's toast to many new adventures.

Email ThisBlogThis!Share to TwitterShare to FacebookShare to Pinterest
Labels: Hubs