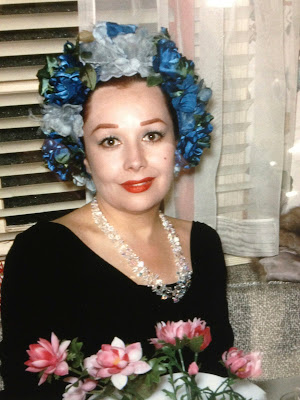 This is a photo from the '60s of my Great Aunt, Cookie. She passed away just over a week ago.

You can't tell from the picture, but Cookie had an amazing head of bright red hair. It was that way forever, and it was sort of her calling card. She was always impeccably dolled up, down to her red lipstick, nail polish, and heels. She always smelled like Cookie -- a smell that became intoxicating when as a child I'd received a number of extraordinary gifts and cards from her, all doused in her perfume.

Cookie was the connecting force in a large family. I'm not sure how I'll ever hear any of the family gossip ever again.

She'd been married, but divorced, and never had kids, and yet somehow she was a mother figure to what seems like dozens of people. Cookie had a way of introducing herself to you that made you feel you'd known her for eons, and you certainly belonged in her larger-than-life presence.

She was a person who knew what she wanted, and she went for it. To be crass -- she had life by the balls. She told the family a few weeks ago that she was feeling better and wouldn't be dying, after all. And even though liver cancer is certain and speedy death, we believed her. If there is a single person on this earth who could defeat such a disease, it is Cookie. I actually remember sighing with relief when I heard of her decision not to die.

Cookie had a few life philosophies I've been mulling over since her well-attended funeral. For starters, and most importantly, she valued family above all else. She'd do anything for them, and she'd also fight with them when they were being pricks. She was pretty much the queen of the hot-headed side of my family.

Secondly, she valued a good time. One should be enjoying oneself in the most fabulous manner possible, whenever possible, and one should look fantastic doing it. For this reason, we are well-stocked with Cookie stories that will keep us cackling into our own old age.

Thirdly, she valued her church and giving back to her community. There were hundreds of people who knew her and attended her services; she made it her business to be known by them.

Some people pass on regretfully not having lived the way they wanted. Sometimes their legacies are muted and gray and sorry. I think the family is thankful this could never be said of Cookie. She touched so many people so profoundly that echoes of her influence will be felt for generations to come. It's an extraordinary thing to walk away from a grave site feeling inspired, but that is how I know many of us felt. We'll miss her terribly, but we're thankful for the reminders to treasure what's important and squeeze as much joy as possible out of each moment.