Something's got to give 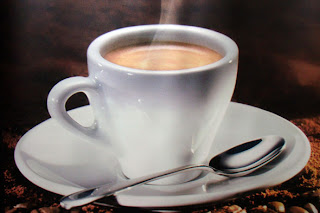 I estimate I am consuming about 1,400 calories a week in my coffee, because I put half & half and agave nectar in my coffee, and I drink two mugs a day.

One pound of body fat equals 3,500 calories. Does this mean that if I quit coffee and take up zero-calorie green tea, I will lose one pound every two and a half weeks?

If that is the case, I could lose 16 pounds by the end of the year, just by quitting coffee.

Say I quit coffee. And say I go for a half hour walk every day. I have an app that says that equals 117 calories burned, which would be 819 calories a week. At that rate, I'd lose one pound every 4.2 weeks (not very impressive, is it?). That would end up being 9.5 pounds by the end of the year. Combine that with cutting coffee and we're at 25.5 pounds.

Not too shabby. I'm thinking about it.

In case you're wondering, if you make that a half hour of running, it's 356 calories burned. Let's be realistic and say we're only going to run three times a week, and the rest of the days, we'll walk. That's a total of 1,536 calories burned a week, for a total of one pound lost every 2.3 weeks. At year's end, that'd be 17.4 pounds. Combined with quitting coffee, it could total 33.4 pounds.

That's even more impressive. I'm thinking about it.
Posted by Erin at 6:13 PM