I wondered which restaurants could possibly be on a Dishcrawl in my hometown of Milpitas. See, Milpitas doesn't have a downtown, and if it's known for anything it's largely the combined odors of the dump and the waste water treatment plant that waft eastward and can be particularly offensive on a summer evening.

I personally know of a couple hidden gems in the town and to date those restaurants are still the best I know of in Milpitas (Casa Azteca, Sen Dai Sushi, Burrito Express, Pizza Box). Lots of people know Milpitas is also home to a couple of enormous and well-liked dim sum restaurants. I'm not a dim sum fan, though, so ...

In any case, a friend of mine is the editor of an online newspaper for Milpitas and she asked if I'd like to join her for this Dishcrawl. I couldn't resist, even though it was a Wednesday evening and I'd literally spent the day being pooped, peed, and barfed on by a small human and all I really wanted was a large glass of wine and my pillow.

Without further adieu, here are some photos and a couple snippets from the evening.

We started at Ta Restaurant on Abel St. It's Vietnamese.  It's said to be quite busy at lunch but the place was deserted at dinner time. They have a full bar and a comfortable dining room. 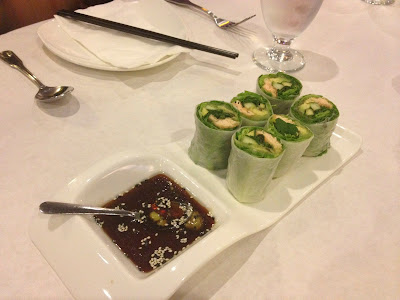 Spring rolls with shrimp and wasabi sauce. These were quite tasty. 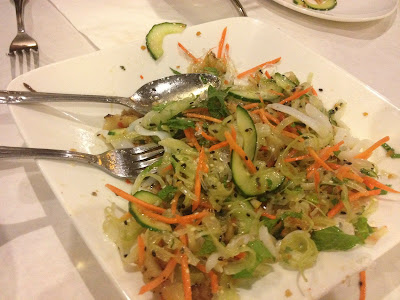 A salad with noodles, a little chicken and a variety of vegetables. I initially really liked this dish but later found myself urping up the mint taste of it. 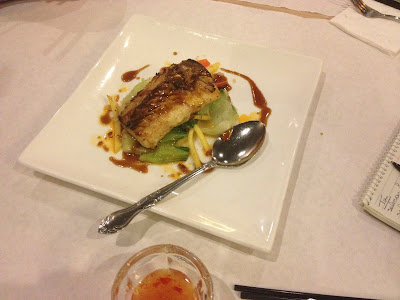 Caramelized chilean sea bass. Fairly tasty. I'd say the most attractive points were the tenderness of the fish and that it came out steaming hot.


The next restaurant was called Taste Good Beijing Cuisine (it's Chinese). The name cracks me up but the food was my favorite of the night. Their jasmine tea was delicious. The chef is said to be quite famous in China. My favorites: The steamed bread and meat (rou jia mou -- the name doesn't do this justice. It's super spicy and flavorful) and what I'm going to call a Chinese quesadilla. The great thing about this place is the entire menu comes with photos so you can figure out what everything is. 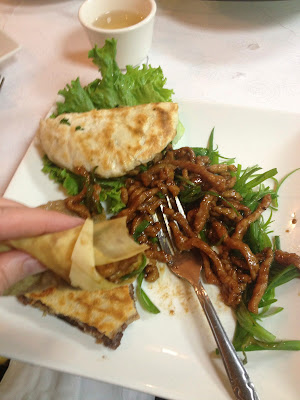 Steamed bread and meat in the upper left. Here I'm eating stir-fried pork in a tofu wrap. Yummy but didn't stand up to the other items on the plate.


Final restaurant - Tikka Bytes. This restaurant apparently began as one of those gourmet food trucks we've been seeing so much of lately. Here we tried garlic naan, something called Mushroom 65, and chicken tikka masala. It was a decent Indian meal I wouldn't mind hitting up for lunch, but have to admit it wasn't the awesomest ever. Their chai tea was quite yummy. 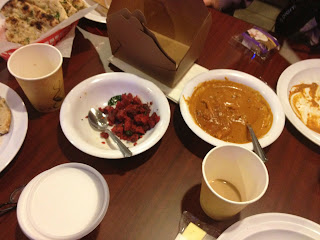 So there you have it. Should you ever find yourself stranded in Milpitas and hungry, I hope you know what to do (get out as quickly as possible, in case that wasn't clear).
Posted by Erin at 10:47 AM