The Bachelor, Ep. 6: Do you want my mouth closed, or open?

So here's a theory for you. At this point, Ben already knows who he's choosing at the end, and he's told this to the producers. Therefore, the producers can manipulate the remainder of the season in order to wring as much emotional drama out of this poop parade as they possibly can.

And here's another theory for you, which isn't mine -- I stole it from someone else, but it made a lot of sense. He has to pick Courtney. If he picked a different woman, she'd be hella pissed watching this season unfold, don'tcha think?

So combining those two theories, you can see we are already being manipulated, right? Courtney doesn't get a rose on the group date. She doesn't even get the first rose at the rose ceremony. Ben doesn't meet her in her room when she invites him. It's all a farce, I tell you. And be assured that whoever the other final woman is, it's going to be someone everyone in the viewing audience unequivocally likes, and Ben breaking her heart is going to make us throw our shoes at our TV sets. Mark my words!

All right, let's get down to brass tacks. 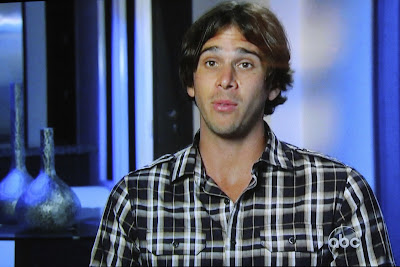 
Kacie B gets the first one-on-one. Courtney calls her "kind of annoying," and honestly, people? I think Courtney's right. Have you heard Kacie B laugh? Gah. Ben is worried he and Kacie will run out of things to talk about. 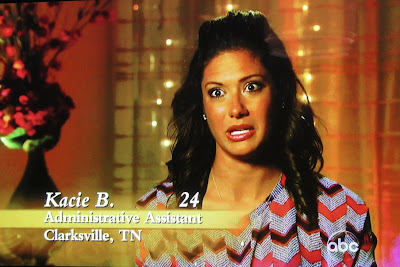 Anyway he takes Kacie B to a deserted island, where they fish and hack open coconuts. "I think today is a good example of whether we'll be able to work together in the future." *EYE ROLL*

My husband notes Kacie is probably not Ben's favorite because at no point during the deserted island trip did she "wank his yanky." Or maybe it was "yank his wank." She did, however, tell Ben all about her high school eating disorder. She says she was anorexic and bulimic. Girl? As a person with her own food issues, I feel you. But I think you just lost yourself this competition. You're too good for him, anyway.

Next up, Ben takes a bunch of women on a jungle date. Jamie -- who it turns out is some kind of closet freak -- is impressed with Ben's long boat. Not to be outdone, Courtney rubs her breasts and tells everyone how wet she is. 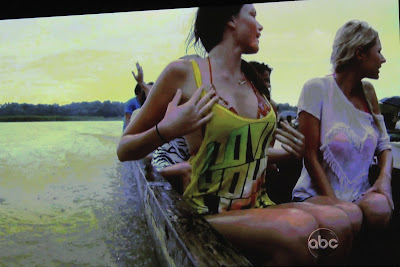 Once they get to the jungle, some native peeps have them put on native garb. Predictably, everyone but Courtney keeps their bikini top on. Courtney calls them all prudes. Ben says he "appreciates" Courtney's willingness to bare it all. Perhaps he was trying to gauge boob floppiness on this date? What a douche. 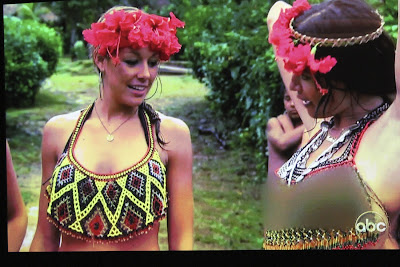 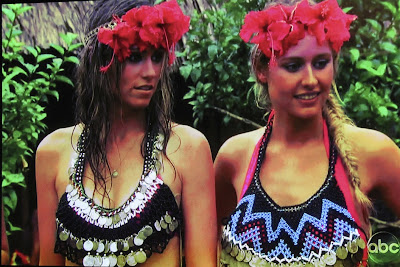 Lindzi and Casey eying Courtney's ta-tas. Lindzi's like "I will cut you," and Casey's like, "I am so high right now."

THEN? Then Ben shows up in his loin cloth. 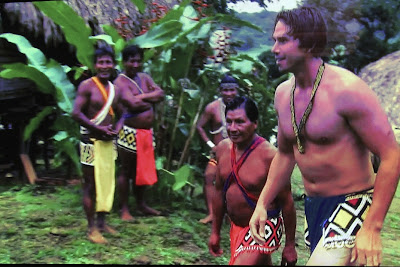 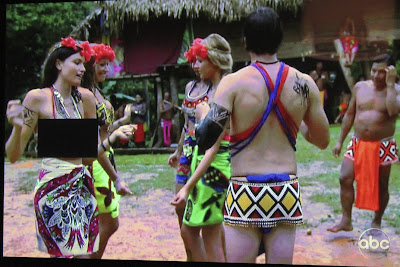 Oh, the horror. He looks like he took a poo poo in his diaper. Courtney is jiggling her boobs so much the producers give up and just put a black box around her torso. 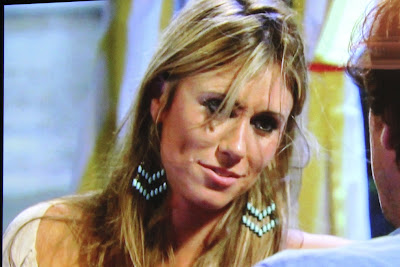 Lindzi gets a little one-on-one time with Ben. I like her earrings. She tells Ben she's cried over their relationship. Egads. Then they kiss loudly. It's gross.

Then poor Jamie gets some one-on-one time, and the entire time, Courtney's skipping in circles behind her in a white bikini. Shockingly, Ben barely paid attention to what Jamie was saying. 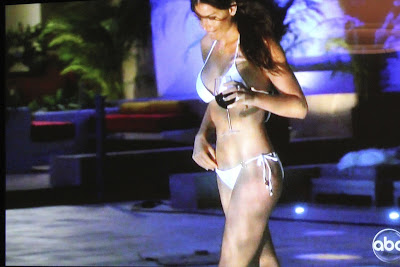 Then Emily, who we know has poor judgment because of the white-girl rapping thing, then decides she may have misjudged Courtney and that Courtney is suddenly a cool girl. 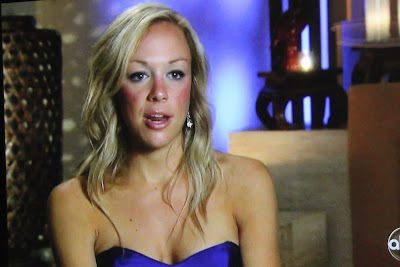 Emily feels the need to apologize to Courtney for talking crap about her to Ben, and SHOCKINGLY Courtney does not accept her apology and instead says she doesn't forgive and forget and has lost all respect for Emily. JUST SHUT UP ALREADY.

The group date ends with Lindzi getting the rose and Courtney staring wistfully at a wall and talking about how she has a pattern of dating men who don't appreciate her. My husband says this is because she doesn't build her worth with men, she just says "here's everything" right away. A little mystery never hurt anything, Courtney! Ya couldn't have waited for the overnight dates to show him your vagina??

Then we have a two-on-one date with Blakeley and Rachel. This means one of these chicks has to go home. 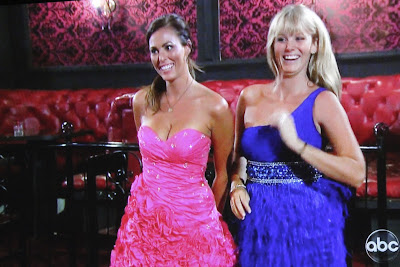 I am loving the pink and blue because I grew up watching Cinderella. It's too tedious to explain.

Ben is stressed and says he feels Blakeley and Rachel are on an even playing field. I'm inclined to agree. They go dancing. Blakeley says "sexual and sensual" is "who I am." Someone tell me if this woman is a stripper, already. Also, Blakeley makes him an embarrassing collage, so obviously Ben gives her the boot and keeps Rachel.

Then Casey goes home because she's in love with some asshole that won't marry her (not Ben). 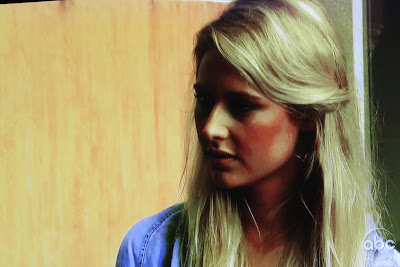 Here's the deal. Casey was actually the prettiest girl there, but she didn't have much going on personality-wise. Ben accused her of not "opening up." We could take this to mean a variety of things. 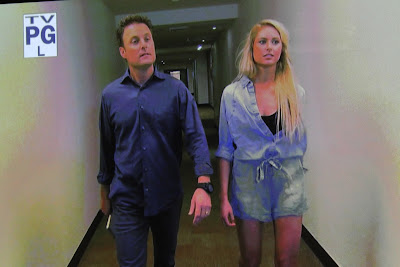 And it's a good thing she's so pretty, because I am not sure if I can adequately express how awful this jumpsuit is. It's like a cross between scrubs and a bag. In denim. I like to think Chris is making a "I have a normal job and this is not at all awkward" face.

Ben tells Casey he doesn't sugarcoat things and she should go home. As she tromps off in her jumpsuit, he stares wistfully at the ocean, probably thinking about Courtney's vagina. 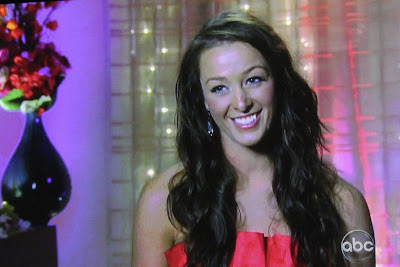 Our girl Jamie, who it turns out is actually funny and endearing, is the only one who hasn't kissed Ben. She decides she's basically going to hump him. She tries being cute and sexy with some kissing instructions, and it probably would have been cute and sexy three episodes ago, but instead Ben is just confused and he sends her packing. It's not embarrassing at all. In Opposite Land.

Next time they go to Belize. The Wonder Twins, Kacie and Nicki, are going to team up against Courtney. It's all a ruse, you guys. The episode after Belize is hometown dates. Hold on to your hats.
Posted by Erin at 10:36 AM