I ask because my neighbors are having some work done at their house, so the contractor put a port-a-potty outside, and it's become abundantly clear that the workers are pooping in the port-a-potty. Oh, yes. Many butt fruits have been deposited in that puppy. That shizzle is rank. At least it's not summer, eh?

Pooping in port-a-potties has exactly nothing to do with tangerine beef stir fry, other than eating one may lead to the other. But I said last week I'd post this recipe here this week, and instead of doing that I've been hyper-focused on finishing the book (which: no, I didn't fucking finish it, and yes, I kind of do wish I was dead. Related: If you ever decide to write a book, write it well the first time so you don't have to go back and re-write the whole fucking thing. Just a thought.) and on my new diet, which has gone pretty well until today, when I had one single thought about a Reese's peanut butter cup and the entire right side of my face began twitching uncontrollably.

Let's just move on to the stir-fry.

For starters, you should make your stir-fry in a wok. 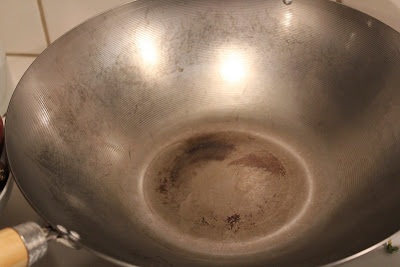 This is my new wok. What, it's not clear that this is my new wok because it looks like some piece of shit hubcap someone ran over? Well, that's the point, my friend. Hopefully some day this wok will be coated with a patina darker than a black steer's tookus on a moonless prairie night. Only then will I have truly achieved true stir-fry stardom.

I bought this wok in October after much bitching and moaning on the part of my husband, who insisted that my stir-fry tasted like garbage (it did) because I didn't have the right tools. Enter the wok. It does, in fact, make stir-fry taste about four quadrillion times better than it would if you attempted to cook it in a normal pan.

Let's shut up about the fucking wok already, and let's look at some ingredients. 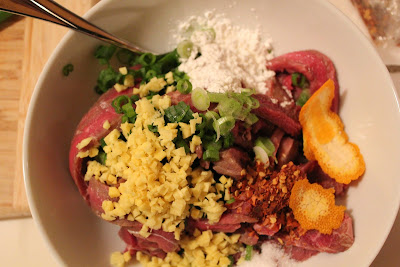 Sirloin, scallions, ginger, red-pepper flakes (leave these out if you don't like heat -- they make it very spicy), tangerine zest & juice, cornstarch. 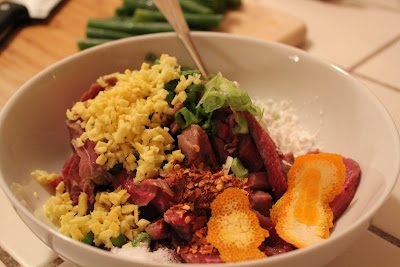 There is it again. Yup. 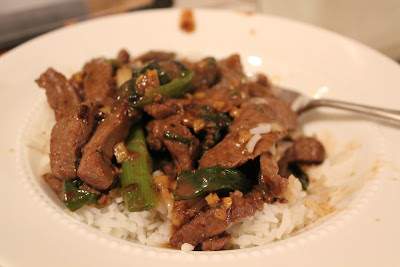 Somehow that colorful bowl of food turns into a mostly brown stir-fry. But it tastes very, very good. And it's a really fast meal to make.

This is one of Martha's stir-fries, from her December 2011 Everyday Food. The link is here. Happy eating!