I know I've already mentioned this book, "Brain Over Binge," that I've been reading, and actually just finished last night. I've essentially been torturing everyone I know by telling them this book might be the key to curing all of our neuroses. Responses vary. 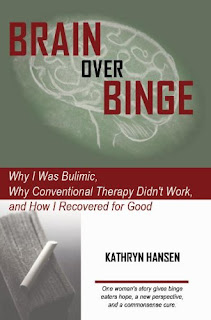 I think if you are interested in really employing the technique the author recommends, you should read the book.

But I'll tell you about a few points that have really hit home with me.

1. Diets are the root of all evil. The first diet a person embarks on has the potential to ruin their relationship with food and/or their body for the rest of their lives.

2. Emotional eating is bull shit. When I feel an emotion and I want to eat, it's because I've trained my brain that when I am stressed, bored, etc., it's time to eat. I've created a bad habit. It's breakable just like any other bad habit.

3. When I have an urge to eat and I'm not actually hungry, that impulse is not coming from the true Me. When I listen to my true self, I find it's easier than it's ever been to put food out of my mind.

The advice in this book seems over-simplistic. Want to stop over-eating? Then stop doing it. That's what it all comes down to. The book tells you how. I don't want to reveal the author's whole methodology, which is why I was a little cryptic above.

While reading "Brain Over Binge" I decided I was going to try to break some bad habits and start new ones. The general consensus seems to be that it takes about three weeks to start a new, good habit. Who knows how long it takes to break old, bad habits? Doing so involves stopping an activity for long enough that the synapses in that part of the brain weaken until the habit disappears.

The most important bad habit I am breaking is impulsive eating. I get an urge to eat and sometimes I can't even focus until I eat something, regardless of whether I'm hungry or not. That is complete bull shit. That impulse is not coming from Me, and knowing that, I've been able to shut that voice out without much effort. I'm a little surprised, actually, at how easy it's been so far, and a little nervous that it's going to stop working. I'm trying to have faith in the process.

The new good habit I'm starting is eating when I am hungry, and stopping when I am satisfied. A novel idea, right? If I listen to my true self when I'm eating, I can recognize when I have had enough to eat. It's usually when I've slowed down a little, and maybe leaned back or put my fork down. Sometimes it's when I've had a surprisingly small amount of food. Sometimes it's when I've eaten the whole sandwich. Here's a little photo essay of my leftovers from the last two days. 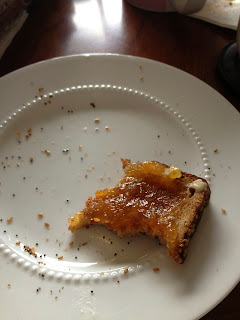 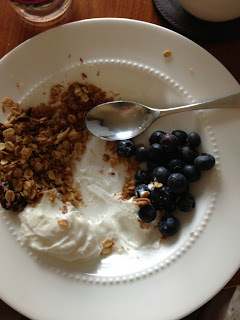 Breakfast. Left: toast with jam.
Right: granola, berries, yogurt. Normally I would have eaten all of this. 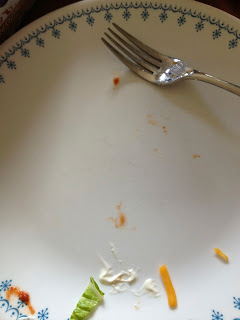 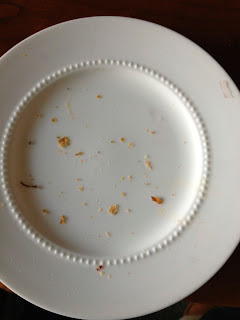 Lunch. Left: bean burrito. Right: Pulled beef sandwich. I notice I feel hungrier at lunch time. I may be waiting too long to eat. 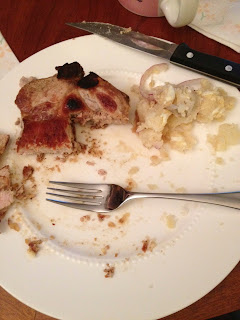 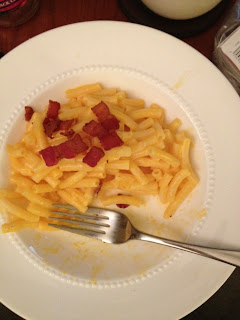 Normally I would have managed to polish off my entire dinner, each night. At the very least I would have eaten the potato salad and the bacon because they're my favorite parts of each meal.

You'll notice my meals are not exactly the healthiest meals I could be eating. The idea is to avoid a sense of deprivation, which would feel like a diet, which usually results in a "binge" of sorts; usually at least a few days of eating way too much food. I do enjoy vegetables, I swear. I'll be making more of an effort to incorporate them into my meals.

You may also notice I didn't show you any snacks. Day 1 I didn't eat any snacks, which is VERY unusual for me. Day 2 I had a handful of granola and a few chocolate chips. And then I stopped. Normally I would have eaten ALL of the chocolate chips, but I felt only the smallest desire to do that.

Another thing: I haven't mentioned weight. I decided to stop weighing myself. It was making me feel terrible. So I quit. I might weigh myself in a few weeks, but for now I think it's basically useless.

I have pretty high hopes for this process, and I've been feeling pretty excited about it, which is more than I can say for just about any diet or cleanse I've ever been on. It's a completely different attitude, actually. I approach diets with a sense of dread, and I've approached this with excitement and hope. That right there might be enough.