I am so relieved that I finally figured out what's driving me insane about this season. Everyone is botoxed to within an inch of their lives! Ben included.

A tip: Emotional words mean almost nothing to anyone when your facial muscles are frozen into a permanent half-smile.

This week they went to Park City, Utah. It was pretty, blah blah blah. Ben wants them to "experience the outdoors," because none of them have ever seen trees and rivers.

Before any of the dating begins we're seeing a lot of Nicki and something about her has changed. I didn't even recognize her at first. What happened?! Maybe her botox is wearing off. 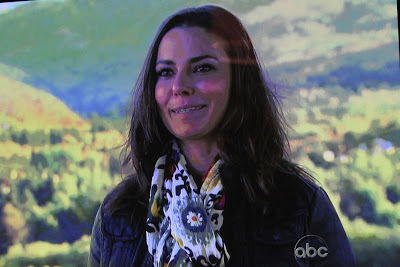 This week Ben tells Nicki she "thrives in a group setting." This is Bachelor-speak for your number is gonna be up soon, honey. She tongued him something fierce, anyway.

So, Ben's first one-on-one date is with Rachel, with whom it now appears he has zero chemistry. For some reason he decides to keep her around anyway, after she "opens up" about how she has problems communicating. All this despite some really awkward conversation about how the sun is in their eyes and making them squint. This is the stuff dreams are made of, lovers. 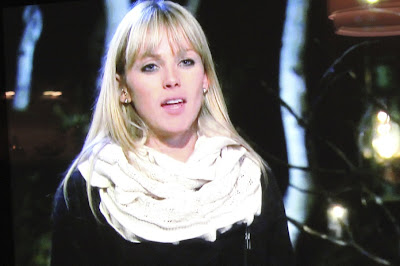 Rachel is very excited about her date. Can't you tell?!


Then it's time for the group date, which everyone's nervous about because Courtney will be on it, and judging by the gleam of evil in her eye, she plans to hump Ben in front of the group.

The group date was planned by my dad, so they obviously went fly-fishing. Twelve of them standing knee-deep in a river five feet from each other. I wonder why no one caught a fish?!

Oh, but first Ben rode in on a horse. It was very manly, and as Nicki pointed out, his hair was blowing beautifully in the breeze. 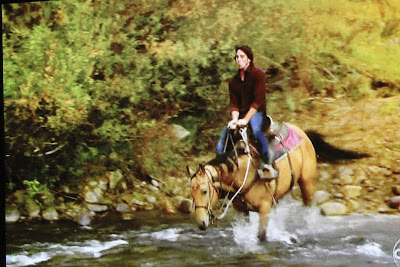 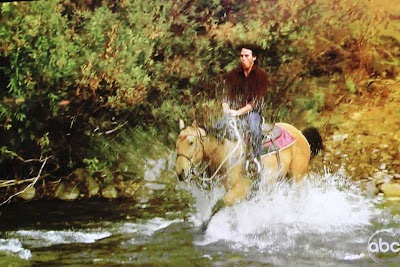 I think this is where the expression "Whoa Nellie" comes from.

During fly-fishing, Courtney predictably drags Ben away from the group for a one-on-one lesson, and then she catches a fish while nature-girl Lindzi fumes nearby. Sorry Lindz. Evil trumps Marsha Brady every time. Ben waxes on about how Courtney just "gets it." Meanwhile she's talking shit about how jealous everyone is.

Later on while Ben is frenching Nicki, Samantha interrupts so she can grill Ben about why she's only been on group dates. This is when Ben spontaneously decides to dump her ass. 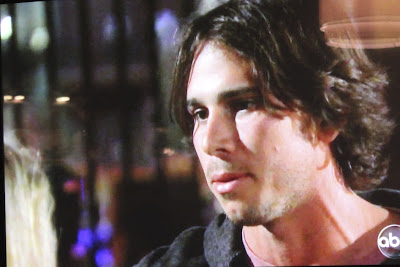 Ben's your-ass-is-grass face. Can't you tell? I think the vein in his neck is the only sign he is irritated. Otherwise he appears to be almost smiling. 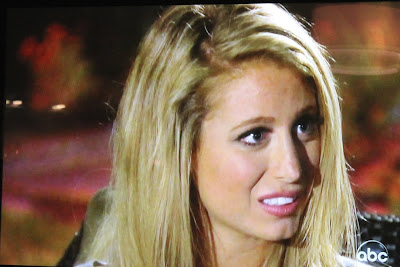 
After this, Ben takes Kacie to his room and they talk and kiss and YAWN. He says "I'm in trouble with Kacie B." Courtney is pissed that he's tonguing someone else so she gives Ben some sob story about feeling unsure blah blah blah. So he gives her the rose to reassure her, and all Americans everywhere simultaneously screamed. 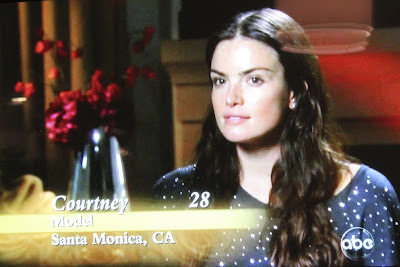 Courtney's smug my-evil-plan-is-coming-to-fruition face. Courtney doesn't actually need to make any facial expressions. Her malevolence rolls off my television and into the family room. 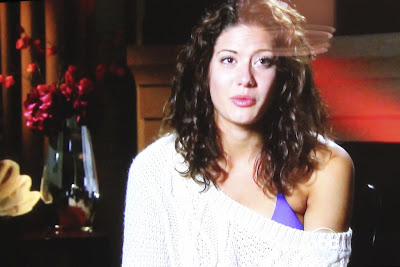 Kacie's I-can't-believe-he-gave-the-rose-to-Courtney face. Incidentally, I donated that exact sweater to Goodwill in 1992.

Then Jennifer, my dark horse (who's such a dark horse I keep forgetting to take pictures of her face) goes on a one-on-one date with Ben. They rappel into a crater, blah blah. They take a ski lift to dinner, it starts raining, they eat each other's faces, and Ben gives her the rose. Then they go listen to some awful band while a bunch of children of the corn stare at them. Ben's hair gets mighty frizzy. 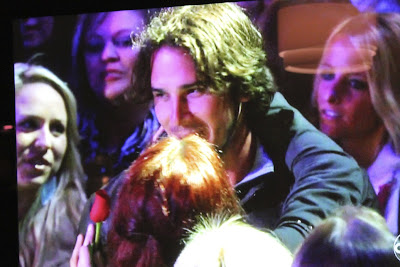 I think his face moved a little! Quick! Alert the botox technician!


Meanwhile, back at the ranch, Emily is gearing up to fulfill the archetypal role of tattletale. She is not going to be able to stop herself; her hatred for Courtney runs deep. And who could blame her, but HAVE YOU EVER SEEN THE SHOW EMILY? Continue in this fashion and you will go home. It's a statistical fact. 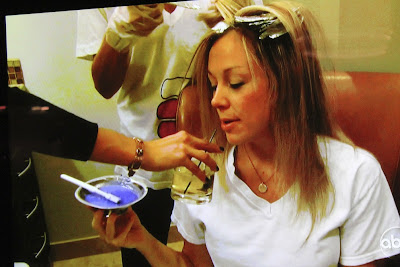 Emily bitching and moaning about Courtney while Blakeley does her highlights and Elyse plies her with alcohol.

Emily feels compelled to tell Ben that Courtney is a lying skank. He swats her down, as I expected he would, and then she feels misunderstood and goes and complains to the girls about it. 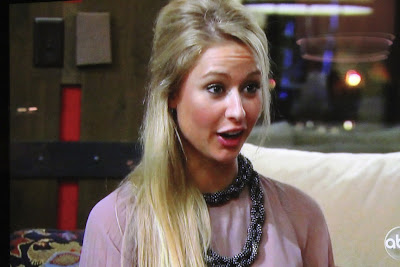 Casey, who is still around because she's cute. This is her Courtney-is-my-best-friend face. Her forehead moved! Sweet Jesus, where's the botox tech?

Then Casey tells her buddy Courtney that Emily is talking trash, and Courtney starts being a total whore, as expected. She expects Emily to get voted out, and tells her so. 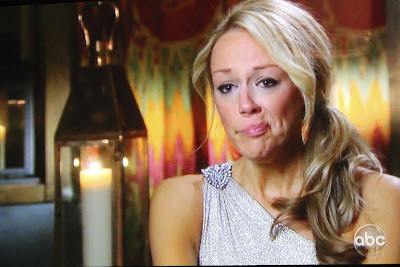 Emily is pretty sure she's gonna get booted, too. She's so upset, the whole left side of her face moved!


But, no. Monica was eliminated. 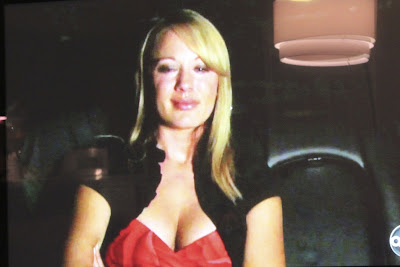 You can tell she's upset because of the water coming out of her eyes.

She said it was "the most painful thing in this world." I will let it slide this time.


Next episode, they're going to Puerto Rico. Courtney was just there two months ago! Probably on an AARP photo shoot! Emily is going to give Ben another earful about Courtney, and she'll probably get booted after that. In revenge, it appears Courtney goes skinny dipping in the ocean with Ben in front of all the girls. Oh hell no.


Unrelated: Why does Blakeley know how to stomp?