The Bachelor, Ep. 2 - Bitches Be Crazy

** This entry contains spoilers from last night's episode. Read at your own risk. **

As I said in my previous The Bachelor entry, I don't do recaps; I just comment on the wackness that is The Bachelor, assuming you've already watched it. So, here we go, again...

For starters, just throwing this out there again...

Ben brought the whole kit and kaboodle to sleepy Sonoma, which is just a couple hours north of me. It warms the cockles of my heart to think of all the hissing and back-biting taking place practically in my backyard!

Let's start with Kasie B. Firstly, she squeals too much. Their date was a bit of a chaste yawner until they went to a theater to watch videos of their childhoods, including videos showing Ben's dad, who died five years ago. Ben proceeds to cry, because obviously his dad is dead and it's sad and shit, and we as an audience proceed to realize just how tacky this show is. Who shows videos of their dead dad to a person on the first date so they can have a good cry together??!

Once that date ends, we enter the "everyone run around like trained monkeys" portion of our program. Blakely has suddenly decided she is not lesbianic for Monica and wears a weird, slutty striped jumper on her group date. She gets to play a gingerbread man in an awful play the whole group puts on for a bunch of kids. Samantha quips: "What do you get when you cross a gingerbread man and a hooker? Blakely!" Later on she calls her a cougar (Blakely is 34 and most of the other ladies are in their early 20s) and "horsey" and a "tranny." This is where I decide Samantha is bitter, but entertaining, and also when my husband and I decide Samantha looks like Lady Gaga. At the cocktail party at the end of the show, she wears a dress that makes her boobs look like a butt. I'm not a fan, but my husband doesn't mind. 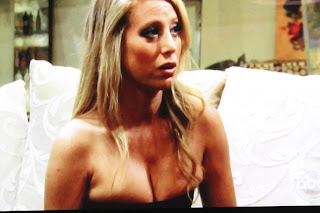 By the way, Blakely is a VIP cocktail waitress. Someone please explain what in the hell that is. 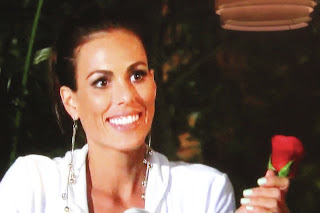 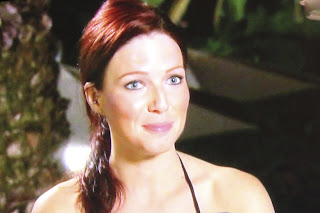 And .... and I have a very, very bad feeling about Courtney, you guys. I have a sinking feeling that she might make it to the final two. If so, this is proof there is no god. That chick is certifiably cuckoo pants. When Kasie told her she had the next 1-on-1 date, Courtney asks her, "How'd that taste coming out of your mouth?" Bewildered, Kasie goes, "What?" And Courtney SAYS IT AGAIN. She REALLY wants to know how it tasted coming out of Kasie's mouth! Like, a lot. She's evil incarnate. You can see it in her crazy eye.

Ben thinks Courtney is one of the most beautiful women he's ever seen. My husband thinks Ben's "picker is off." We agree. Courtney is not even in the top 5 hottest chicks on that show.

Anyway, Courtney somehow manages to act like a completely normal human on her date, instead of the she-devil succubus she really is! Ben falls for it hook, line, and sinker, calling them "a good match" and saying she's making him "think big picture." Whaaaaaat? 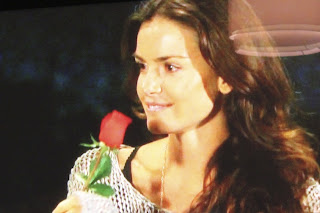 Well, in any case, I think maybe we just need to give Courtney some time. Her craziness will surely rear its ugly head on a future date.

Now, onto our girl Jenna. She is our girl because she's a blogger, but holy hell. Girlfriend's got problems. She climbs into bed to cry after talking with Ben and then speaks gibberish to the camera a bit later. Like, I think she is drunk and/or just speaking nonsense. In either case Jenna, if you are reading this, please seek psychotherapy as soon as possible. 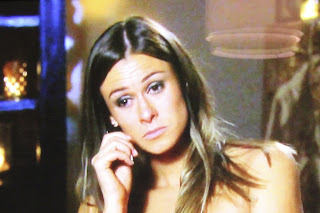 Unsurprisingly, our girl Jenna did not get a rose this time. Neither did Shawn. Not too surprising.

I guess the next episode is in San Francisco. Some new bitch shows up to make all the other bitches crazy, and Erika faints during a rose ceremony or something. It's sure to be fabulous.

P.S. - A couple things you should look at if you're a Bachelor fan. Forever Alone, and Ashley Spivey's blog (she was on Brad Womack's second season), Say No To Cosmo.