Or, as it's said in Cantonese: bok cheet gai.

Look at me! I am so ethnic. Word to your moms. 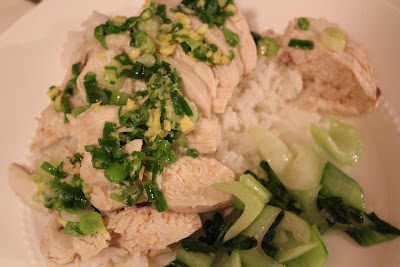 So I know this doesn't look super impressive, but it's about as close as I can come to cooking authentic Chinese food. It's got a flavor you will recognize if you've ever been to a Chinese banquet. And that flavor is: awesomeness.

My friend Kem sent me the link to this recipe. Seeing as how her family actually used to own and operate a Chinese restaurant, I'm absolutely going to take her word for it any time she tells me a certain Chinese recipe tastes good. I was not disappointed. 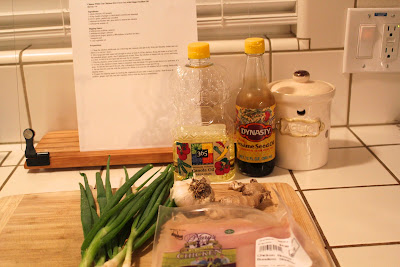 What really sells me on this recipe is how easy it is. Look how few ingredients it calls for! Chicken, scallions, garlic, ginger, and some oil.

Disclaimer: This recipe actually calls for a whole chicken. I used two chicken breasts instead, poaching them for ... I dunno. Less than 30 minutes. Turned out great.

You poach your chicken in water with salt and ginger and garlic. Then you take the chicken out and put a little sesame seed oil on it (be sparing! This stuff knows how to come back to haunt you later).

Then you make your sauce, which is just sliced scallions, ginger, and some salt, with hot ass vegetable oil poured over it. 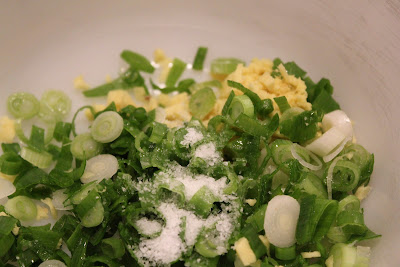 This is the "sauce," pre-oiled. Word to the wise: Put the scallions, etc., in a deeper bowl than they really need. When you pour hot oil over it, the onions and ginger sizzle something fierce, and can cause a mighty unpleasant mess. 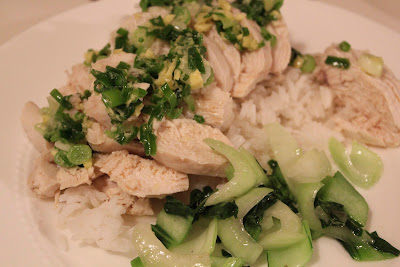 End product. I'm sure this photo is going to win me some kind of award. I sauteed a little baby bok choy as a side, and what I should have done was sauteed twice as much bok choy and eaten half as much chicken. Half a chicken breast is more than enough. I know this, and yet when I'm really hungry I just go in for the kill, only to regret it later.

In any case, you should make this. It's yummy. Probably not low fat, considering the oil. But tis the season to become big fatties, eh? Here's the link.