I arrived at Katie’s home birth late in the evening on my birthday. It was 10:45 p.m.

It was so quiet. Katie was lying in a Rubbermaid birth tub in the dining room, wearing a striped bikini top. Two midwives, a doula, and Katie's husband Russell were bent dutifully over her and barely registered my presence. I removed my camera from its case as quietly as possibly and sat gingerly on the edge of the couch. 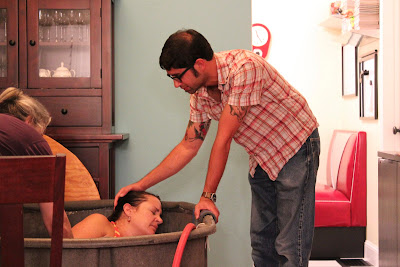 When the screaming began, my spine melted. I knew well beforehand she'd scream because she gives birth quickly, and it's intense. And yet knowing it and hearing it are two different things.

I realized with a cold, horrific certainty that I had seriously overestimated my own ability to birth a child.

My own hard-won pregnancy, the one I'd worked on for a year, had ended in miscarriage only weeks earlier and at that moment in time, with Katie's tortured scream making my butt cheeks clench together, I knew it was the best thing that could have ever happened to me. 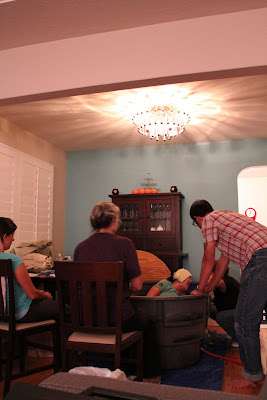 I mulled over the home births I'd witnessed in a documentary. The mothers labored quietly, for the most part. It’s obviously painful, but they each magically squeeze out babies without much fuss, sometimes standing in the kitchen, sometimes crouching in the bedroom, sometimes lying in a water-filled tub, as my friend was now.

My friend, who was sobbing during the few moments of respite between contractions, and telling her doula she couldn't do it. My knees pulled together unconsciously.

At some point I did a thing I have a knack for doing and shut out the screaming and went inside myself and waited. I took a few photos. It's a gift acquired by reporters who have to detatch themselves at crime scenes and the like. Not to compare the birth to a crime scene. This was unlike anything I'd ever witnessed.

At one point I even managed to joke with Katie that she had another half an hour to bring this child into the world on my birthday. She smiled and then screamed.

Then her water broke, and twenty minutes later there was a new person in the room. It was 11:58 p.m. The doula was urging me to take photos. I looked through the lens but couldn't see; tears were running down my face. I pushed the shutter button anyway. 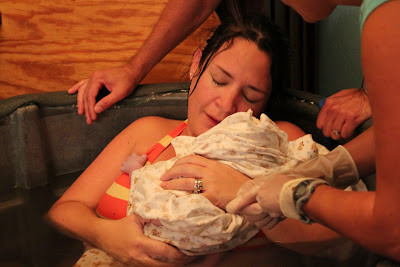 I took it back -- everything I'd said to myself about the miscarriage. 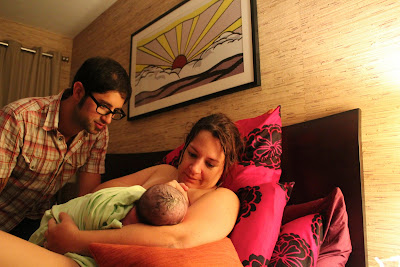 How could I still believe what I'd believed only moments ago, when these two parents were gazing so adoringly at their perfect son?

The thought was gone from my mind, as though it had never existed.

And, after all, there are such things as epidurals, although you should probably not use that word in the company of the midwives and doula who delivered this baby. 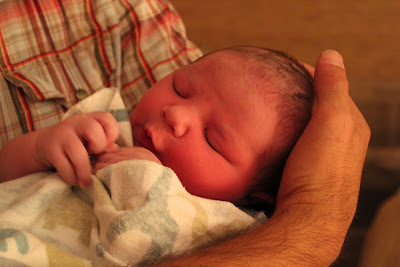 And if I were a lot crunchier, I'd totally consider a home birth. I mean, I'd never seen two more relaxed parents. They had the comforts of their home. Katie was relaxed on her own bed. No one had taken the baby from them to poke or prod or measure or any of that other hospital-type nonsense. She breastfed and then decided to take a shower. We drank champagne and ate muffins.

And at home, you probably aren't going to get MRSA or any of the other nasty bugs hospitals are crawling with. And at home, no nurses are going to demand that only two people be in the room at any given time. 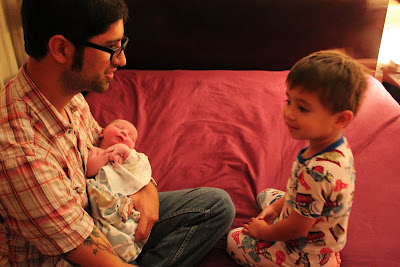 This little boy was very excited to meet his new little brother, who a few days later was dubbed "Charles" -- one of my favorite names in the universe. 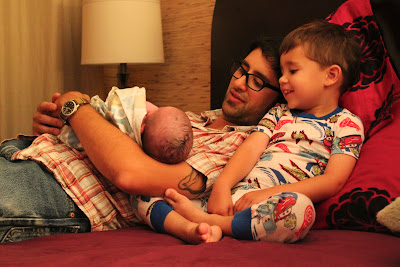 It was a life-altering thing to see. I'd wondered how I would feel about everything afterward, since I'd been slogging through post-miscarriage blues. I found myself re-invigorated, recommitted to getting pregnant and having my own kid. It was so beautiful to see, that my own experience didn't factor in to what I'd witnessed, which I was grateful for.

I was grateful just to be there, and in awe of these people, my friends. I still am. I look at these photos again and again, and still cry each time.


This blog post and accompanying photos were published with the permission and encouragement of my friends, Katie & Russell, in case anyone's got a bee in their bonnet about me telling someone else's birth story.

P.S. As of 3:30 p.m. on 11/3/11, I've deleted the Intense Debate comment system because it was causing your comments to disappear and making me ragey/stabby. I will respond to each of you who left comments by leaving my own comment in the good old-fashioned blogger comments seen below. Thank you for reading and commenting.
Posted by Erin at 12:00 AM