So you know how every now and then I post recipes that turn out well?

It used to be that I'd just post any new recipe I'd tried to the blog, regardless of how it turned out. And then I decided: If something tastes crappy, I just won't post it. A novel idea, no?

So then I was thinking about that some more, and decided: How about when a recipe is a flop, I combine it with other recipes that are flops and post their photos on the blog? That idea amused me, and as we all know, it's obviously all about what amuses me.

This may be the making of a new feature! We'll just have to see how many crappy recipes I try. 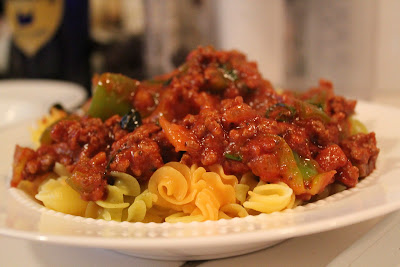 This one was something I called "Erin Surprise." Actually, any time I'm basically throwing food together in a mad scientist kind of way, I call that Erin Surprise. My mom used to do this and we called it "Mommy Surprise." Her results were similar to mine. Sometimes they were awesome, and sometimes not so much.

I'll tell you what happened with this dish. The story goes: I made this dish once and it turned out AWESOME. It's got ground beef, bell pepper, basil, tomato paste, and some other junk I don't remember. So I figured: Super! I made an awesome thing. I will make it again and post it to the blog! And then I made it again and it tasted like poop. Good story, right? 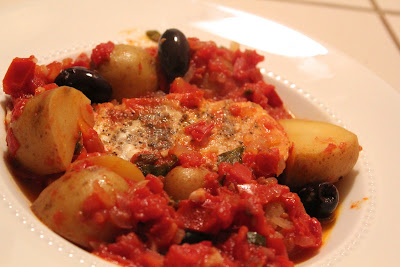 This dish should have been good, in theory. It contains several things I enjoy: Salmon, potatoes, kalamata olives. But I pretty much hated it, and my husband really hated it. It was an Everyday Food recipe called "Salmon and Potatoes in Tomato Sauce," from the October 2011 edition. I think I've decided that salmon needs to sort of stand alone on a plate, maybe with a sauce, but not mixed into a weird jumble like this.

And then there was the coup de grace. 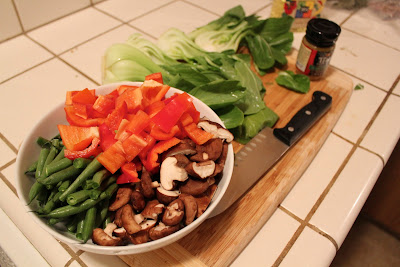 Just looking at all these delivious veggies, I was really excited. So bright, crispy, and vibrant. 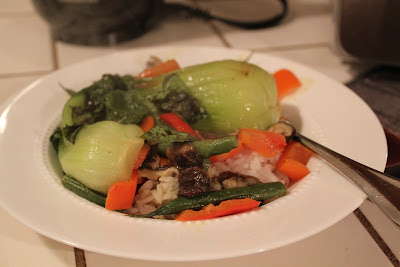 Look how sad they are now. This was a green vegetable curry that turned out limp and lacking in flavor. Baby bok choy has many good uses, but this was a big bastardization of bok choy. I wondered if maybe it turned out so poorly because I don't own a proper wok, and too much water from the vegetables diluted the curry flavor. It's a possibility, but I'm not going to try this recipe again.

That's all for now! I'll be trying a couple new recipes this week so it remains to be seen if they will be fabulous or floppy.