In one sense, not being pregnant any more is a relief in that I can now eat a variety of things and almost none of it makes me want to barf! Win!

I've been taking full advantage of this. Previously all I wanted to eat was bread and slurpees. It is now safe to return to vegetables, meat, and a variety of seasonings. Before, even if I thought something sounded like a good idea for a meal, as soon as I would eat it, I'd decide I never wanted to eat that thing again in my entire life. I still feel that way about a few meals I made while pregnant. Shoot.

In any case, may I present pork fried rice? 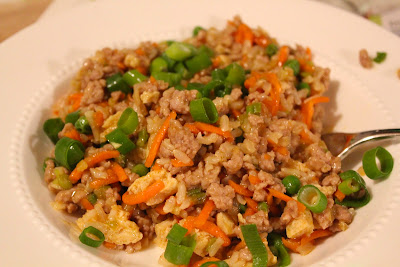 
You may be thinking to yourself: I see a lot of pork, and not a lot of rice. You would be right, my friend. That is because this recipe calls for half a pound of pork and I used a whole pound. I did this because I don't know what the hell to do with a leftover half pound of pork.

Don't be like me. Be smart! Either use half a pound of pork or -- *gasp* -- double the recipe! It makes great leftovers.

This is an Everyday Food recipe, and the "sell" on this meal is that it's fast and cheap. Which is true, laddies. (I'm on an Irish accent kick. We recently finished the previous season of Sons of Anarchy, half of which takes place in Belfast. And now there's an Irish dancer on Dancing with the Stars this season. He's not good looking at all. Nope! Ahem.)

Here are your ingredients, minus your two main ingredients (rice and pork)! 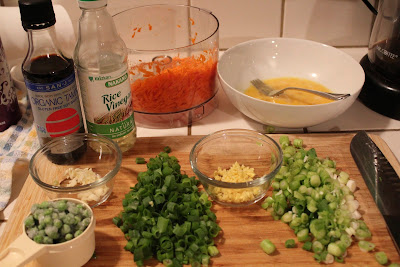 The instructions are easy as pie. Cook up the egg first, then take it out. Then throw the rest of everything else in a pan and cook it all up, then throw the egg back in and finally serve it up with sliced green scallions. It's lovely. It's delicious. It's de-lovely and delicious.

Now, another thing I did -- I used brown rice instead of white rice. I don't care what kind of rice you use, and neither does Martha Stewart. Just cook 'er up and eat 'er, lass! 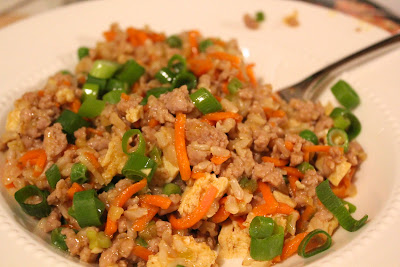