Here's what I was expecting when it came to meeting bloggers at BlogHer:

1) They would be huge introverts and socially awkward, like me.

2) They would look slightly less attractive than their avatars, like me.


But here's what I found:

1) They are normal, friendly people.

2) They are way better looking in real life.

3) This was a little surprising.


Let's start with TILTE, who was by far the blogger I most wanted to meet. We share a similar sense of humor, a love of processed food, and occasionally enjoy talking about our reproductive organs. As we were speaking on the phone and arranging our first meeting, she warned me that she was wearing a T-shirt that made her look like someone's fat mom. To which I believe I said, "In that case, welcome to the club."

Of course, what ended up happening is she showed up looking like an 18-year-old high school track star, skinny as a whip and cute to boot. I had to resign myself to being the only person in my group who actually looked like someone's fat mom, despite being exactly no one's fat mom. Which I forgave TILTE for because she is So. Damn. Funny. 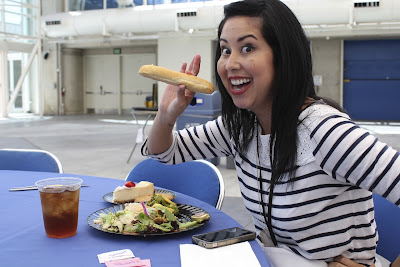 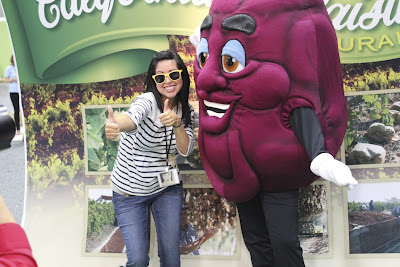 I don't think anything really needs to be said about this. Enjoying a beer and mini hotdog at Sparklecorn.

Christina and I also took a couple pictures at Sparklecorn and successfully ended up looking like serial killers in them. 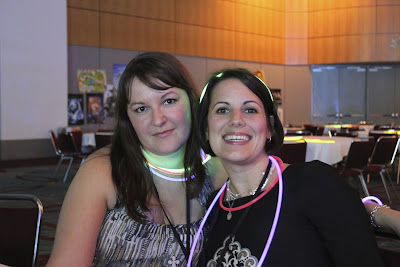 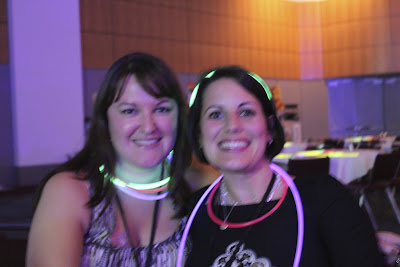 Here's one of our smiley photos. Christina looks like she's getting hungry for human blood.

Speaking of Sparklecorn, I also met Mandy Fish there, on the dance floor. If her avatar was any indication, I would have expected to meet a tall blonde model and THAT. is EXACTLY. what she WAS. I have no photos of her but if you care to watch her speak about sausage, click here.

(also in that video -- Kristine from Wait in the Van, whom I saw at the conference but whom I did not introduce myself to. See above notes on being an introvert.)

Then there was Carrie from The Sweetest. At one point she said smiling so much was hurting her face. She was one of the most hilarious people I met all weekend.

In between conference sessions one day I hunted down Ginger from Ramble Ramble. I was in a tizzy over a session I'd just ditched on how to pitch a book, and Ginger -- who works in publishing -- was very reassuring. She was gorgeous and calm and natural. We went to a session called Twitterholics together, where a bunch of ... Twitterholics ... sat around talking about things they liked and did not like about Twitter. I learned a number of things about Twitter tools that day.

People I saw and did not introduce myself to in that session -- Schmutzie, Redneck Mommy, Palinode, Backpacking Dad, Kungfu Pussy, and others I don't recall off the top of my head. Everyone was a lot better looking in person that I expected. I think that really threw me off. Especially because that day I hadn't done my hair because I was a little hung over and I looked slightly insane/ tore up.

Person I saw directly after that session and whom I also did not introduce myself to but whom I took photos of while Christina spoke with her -- Stephanie from Nie Nie Dialogues.  She is absolutely amazing. 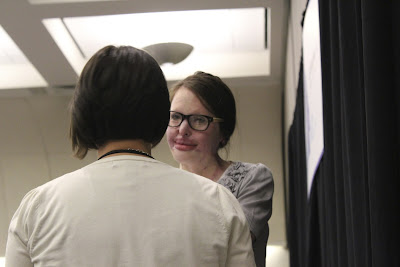 At one point (at the Aiming Low party) I also saw Aunt Becky from Mommy Wants Vodka and I also did not say hi to her. Same for Catherine from Her Bad Mother, Anissa, The Bloggess, Michon Michon, and Neil. That's how I roll.

And as far as actual celebrities I could have but did not introduce myself to, those included: Ricki Lake, Giuliana Rancic, and Bob Harper. Oh, also the Pine Sol lady. 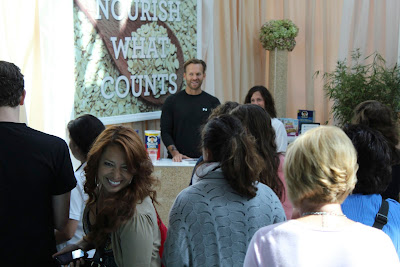 There's Bob in the background.

I'll be writing about Giuliana tomorrow on Tired & Stuck.

Lastly, I met a number of bloggers I'd never heard of before, but whom I'm glad to have met. I have a whole pile of business cards to go through and will soon be following them on Twitter.

If I met you and did not list you here, please let me know! My brain is still mush from learning/travel. I am old. That is all.

Email ThisBlogThis!Share to TwitterShare to FacebookShare to Pinterest
Labels: blogher, I am so old, i was probably wrong