Birds of prey and tomatoes

Last night while I was making dinner, I heard a loud animal noise coming from the back yard. It was not unlike the chirping noises squirrels sometimes make, but much louder. I checked it out, and saw this here bird sitting on our fence, squawking at something in our neighbor's yard. 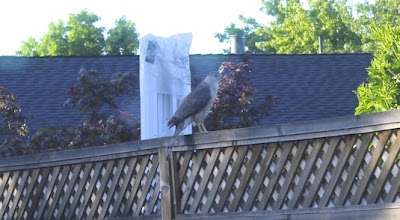 It was only there for a couple seconds, otherwise maybe I would have gotten a better shot. Anyway, feel free to begin arguing about what it is. I think it's a falcon. But it could be a hawk. 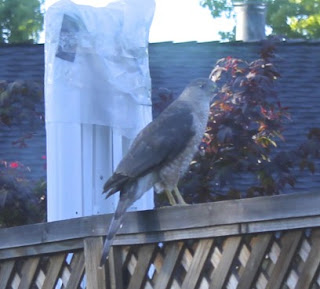 That's as good as that photo's gonna get.

The other night I made another Martha recipe: Pasta shells with no-cook tomato sauce. 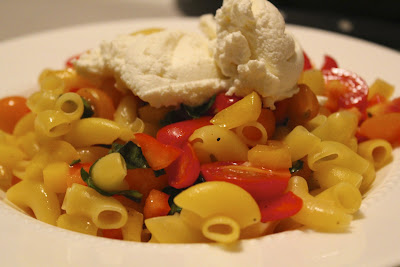 (I obviously used elbow macaroni instead of shells. Thanks, Lisa, for the pasta!!)

I'm not a huge fan of tomatoes, but this had a really good flavor to it, and I figured I should put it out there for people who are really into tomatoes and perhaps wanting something fresh, light, and meatless on a warm summer evening. 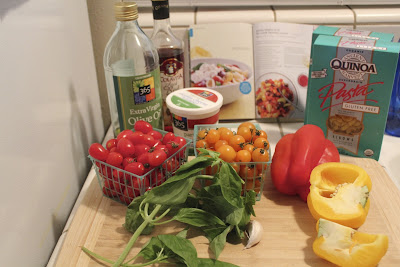 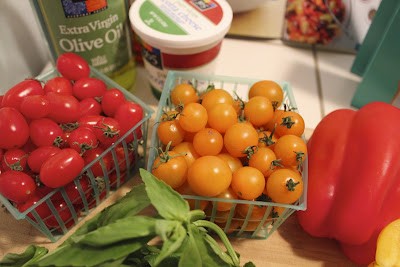 I may not love the way tomatoes taste, but I love how cute these little summer tomatoes are. They always make me think of scorching days, white-hot sun, and concrete burning under my bare feet. 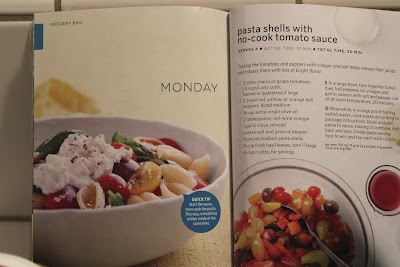 I made this meal on a TUESDAY. Martha would slap my wrist. 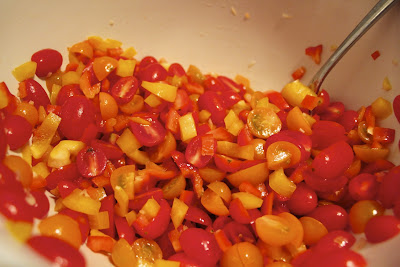 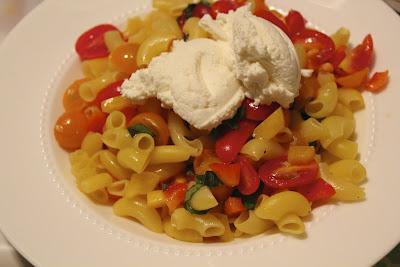 Then you throw your freshly boiled pasta into the bowl with your veggies, toss in some basil, and then serve it up with ricotta on top.

This recipe says it makes four servings but I could see it easily serving six, if not more. I have a ton left over. Also, if you eat this as a leftover, feel free to eat it cold, but what I've tried is heating it up -- with the ricotta on it -- in the microwave. The cheese gets a bit melty and the tomatoes cook a bit more. I thought it was pretty delightful, if I do say so.

As per usual, this recipe isn't up on Martha's site yet, so here you go:

1. In a large bowl, toss together tomatoes, bell peppers, oil, vinegar, and garlic; season with salt and pepper. Let sit at room temperature for 20 minutes.

2. Meanwhile in a large pot of boiling salted water, cook pasta according to package instructions. Drain and add pasta to sauce, tossing to combine. Add basil and toss. Divide pasta among four bowls and top each with ricotta. (As I mentioned above, I believe this makes much more than four servings. Feel free to eyeball it)

P.S. One of my Facebook friends tells me quite confidently that the bird is a Cooper's hawk.

Email ThisBlogThis!Share to TwitterShare to FacebookShare to Pinterest
Labels: food, let's all take our best guess at what this is