Slaw of the cole

I think coleslaw should be called cabbage slaw. It's just an opinion. 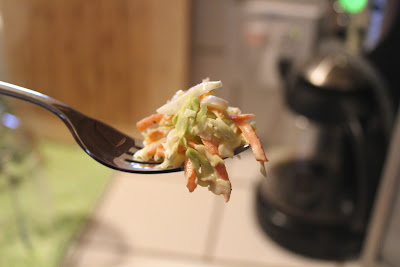 It's summer. I had a head of cabbage, and a new coleslaw recipe from Bon Appetit, so I made coleslaw. 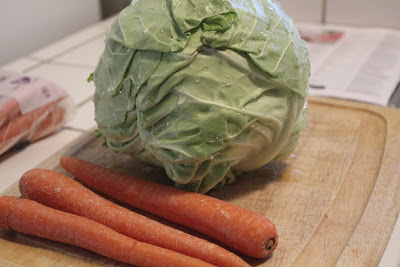 The recipe does not call for carrots, but I like carrots in my coleslaw, so there you have it. 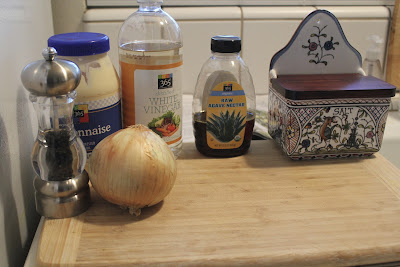 These are the ingredients that I had on hand: pepper, onion, mayo, vinegar, agave nectar, salt (related: my salt box is the bomb). The ingredients I did not have on hand were: dill pickles, pickle brine, horseradish and celery seeds. I don't believe in celery seeds anyway, so no great loss. The recipe probably would have benefited from the pickles and horseradish, though. I had just run out of pickles a couple weeks ago and the idea of buying horseradish I'll probably never use again didn't appeal to me. So I realize I've completely bastardized this recipe, but whatever.

Also, I used agave nectar instead of sugar. I continue to maintain that agave nectar is a perfectly appropriate replacement for sugar in many recipes, unless you're baking.

I used my food processor to chop up the cabbage and the carrots. I used roughly half the head of cabbage, which combined with the carrots filled a large mixing bowl.

Then I schlepped the above ingredients together and poured the mixture over the slaw. Then I added more salt and pepper, and it was perfect. I loved it. My husband loved it. We married it and had coleslaw babies with it, and I will eat the babies for lunch today. 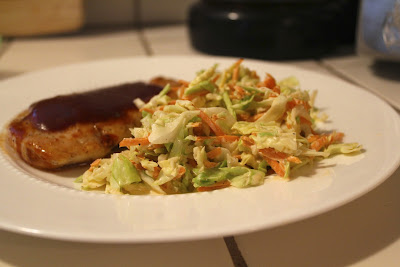 Here's the slaw, accompanied by a barbecue chicken cutlet. I like LOTS of barbecue sauce.

What I think is yummy and different about this recipe is that it calls for minced onion. I've seen red onion in coleslaw before and have often found it a bit overwhelming. This recipe calls for just a little bit of minced onion, to give it just a slight onion taste that won't give you dragon breath.

Next time I will throw in the pickles and horseradish, because I think it would take the slaw to another level.

And on another note -- I'm happy I subscribed to Bon Appetit. They aren't paying me or anything, in fact I'm paying them $10 for a year's subscription, but what I got out of the deal was 12 months of magazines, a magnet with measurement conversions on it (brilliant!) and a mini-cookbook of international recipes. And most importantly -- they appear to post their recipes on their website immediately, which is more than I can say for certain other websites (MARTHA). If you want the coleslaw recipe, just click here.

The website even includes bonus nutritional information that was not in the magazine.

And now if you will excuse me, there are some crying babies in the refrigerator who need my immediate attention.