Cleanse: Day 8 (if I never eat another piece of lettuce again)

Right now I'm drinking the juice of five lettuce leaves, two kale leaves, a zucchini, piece of ginger, and an apple. I ran out of celery and broccoli stalks so threw the zucchini in there for giggles. It .... is not a good taste.

So as promised, I weighed in this morning and I've lost 4.5 pounds. Which is good. I was hoping for more, but a person who indulges in hamburgers during a cleanse can ask for only so much.

I hit a low last night after dinner. Because before dinner I realized there was no way in hell I was going to be able to eat another salad. So I didn't. And that bummed me out because I had this vision of becoming a Raw, Vegan, Gluten-Free-ist, which I should have known is unrealistic.

What is realistic is taking lessons from the cleanse and incorporating them into my life when this is all over. Things I can do after the cleanse include:

- eating gluten-free. Done and done.
- eating way less dairy. We've switched to almond milk. I may still do yogurt, though.
- juicing veggies for breakfast every now and then. Not every day.
- eating more salads. Not two giant meal salads a day, but I can do a modestly sized salad every day.
- more raw-ish veggies in general. I'll steam my veggies for just a couple minutes if I cook them.
- eating less meat. The meat I do eat is going to have to be super-duper-hippie.
- exercise. I feel good when I do this.

So what I ate last night instead of a salad was a pasta sauce (recipe from Crazy Sexy Diet) over gluten-free noodles. I was supposed to eat the sauce raw over raw zucchini noodles, but realized I'd want to shoot myself if I did that. 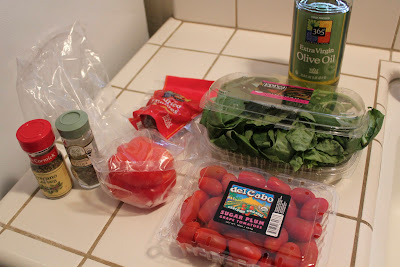 The recipe said to blend a cup of grape tomatoes, a cup of basil, 1/4 cup sun dried tomatoes, a yellow bell pepper (I only had red), a tablespoon of olive oil, and some thyme, oregano and salt to taste.

I broke my blender some time back, so I used my food processor, which probably resulted a less creamy texture, and more salsa-like. But I heated it up and put it over quinoa noodles and it was still pretty good. The husband even approved. I think next time I'd add a little garlic and red pepper flakes for zing. 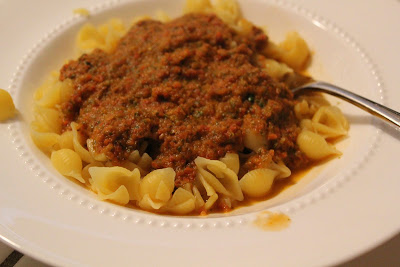 There are 13 more days left on the cleanse. Why do I fall for these crazy things? Every time.
Posted by Erin at 10:35 AM