(Warning: This post is mostly about poop. If you have problems accepting that all humans defecate, this post may not be for you.)

Crazy Sexy Diet says we are all carrying around between seven and ten extra pounds of crap in our colons. Which is pretty disgusting, but I believe it.

Because normally, I do not poop like a champ. I often feel bloated and sometimes I will go a day or two with no poop. Which is probably a testament to the lack of fiber in my normal diet.

Anyway, the book says this happens because of all the meat and mucus (from dairy) and processed foods that get gunked up in our systems. It can take a steak a full week to pass. (Aren't you glad you visited this blog today??)

So this morning, I pooped like a champ. It was awesome.

And it's a good thing that happened, because I was wondering quite seriously how long I can keep this cleanse going. I ate juice, two giant salads, an apple, and some tofu and soba noodles yesterday. To say this is a deviation from my diet would be like saying my neighbor with Aspberger's is a little socially awkward. I'd spent much of yesterday thinking about foods I'd much rather be eating, namely baked goods smothered in butter (Gluten! Sugar! Dairy!).

In related news, I lost two and a half pounds in one day.

I had to let that sentence stand on its own because I think it's pretty impressive. Two and a half pounds in a week would be nice, but in one day? It's just like crack for dieting addicts like me.

So anyway, moving on to Day 2. I'm drinking my juice right now. Today I modified again. It's got one celery stalk, two kale stalks, two romaine leaves, ginger, a pear, and a broccoli stalk. And then I added about a tablespoon of pineapple juice, which I am not supposed to do, but holy hell. I can tolerate only so much green juice.

Last night's dinner was one of the aforementioned giant salads and some baked tofu and soba noodles. 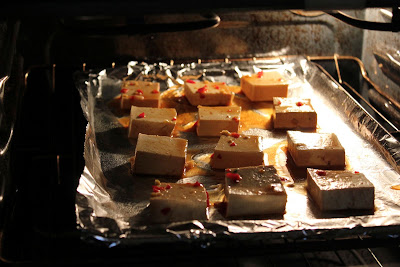 I marinated these tofu squares in a mixture of tamari, agave nectar, rice vinegar, sesame seed oil, ginger, garlic and some other stuff. Then I baked them for an hour. 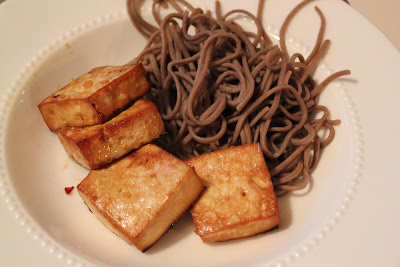 It ain't meat, but it had a decent texture and the sauce was really flavorful. Going to eat some leftovers with a giant salad for lunch ...