I don't make a habit of reading beauty magazines unless I'm preparing to embark on a five-hour flight and would like something mindless and mostly useless to read. So why I felt compelled to purchase the May issue of Allure is kind of beyond me.

Nothing on the cover jumped out at me, except maybe "Blast Your Belly Fat." But who hasn't seen the phrase "Blast Your Belly Fat" on the cover of at least twenty magazines before? It's ridiculous. For the record, the subtitle of that story is "Ab-Tastic Makeovers" (minus points for creating your own word, Allure) and the "story" is basically before-and-after photos of masochistic Allure editors in black bikinis. They each tried different workouts and reported back on whether or not it worked. Not exactly a prescription for blasting belly fat, but we weren't super-surprised about the false advertising aspect of this magazine, were we? 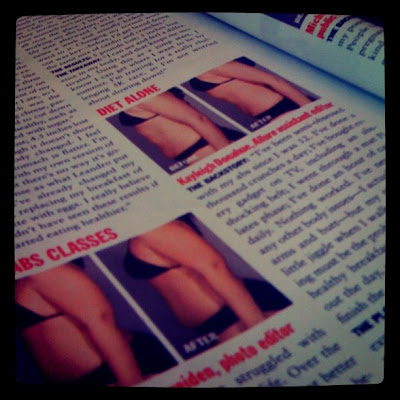 For the record, I do not endorse allowing anyone to publish headless before-and-after shots of you in a bikini, ever.
The top story on the cover of the magazine said in all caps: LOOK BETTER NAKED. 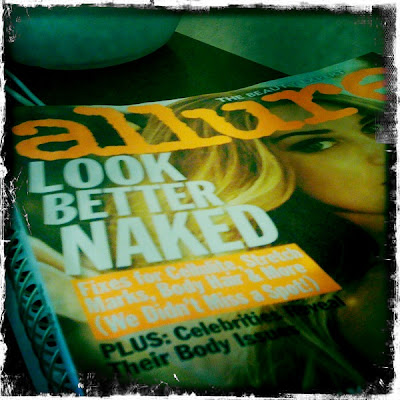 This was basically a bunch of photos of celebrities in the nude, along with recommendations to use lasers to blast away whatever problems you may have that are causing you to look hideous naked. Helpful!

Then there was an article that hadn't been advertised on the cover at all, about a 23-year-old woman who'd been diagnosed with melanoma. Which reminds me, I am pretty sure I have melanoma. Gracias, Allure!

And then? Just to make sure my self-loathing was complete, Allure made sure I stumbled across an article about how my pubic hair is definitely not trimmed to current standards -- everyone's doing the Brazilian wax, still, I guess. I've been shaving in a triangle since 1995.

And finally, in an article titled, "The 7 Biggest Skin Sins," a professor of dermatology is quoted as saying: "Dermatologists never look at your face to see how old you are. We look at your hands and your decollete. They rarely lie."

What a bitch. Now I have to lather my hands and decollete with sunblock every morning. I'd been protecting my face since around the time I started shaving my pubic hair into a triangle, but despite my efforts apparently I'm just a bushwoman with witch hands and wrinkled tits.

It's a truly, madly fascinating phenomenon: the ability of women's beauty magazines to make women feel utterly sub par, ugly, incapable, and diseased. I do not feel more beautiful, at all. I feel paranoid, hairy, and wrinkled. Oh, and fat, but that's a given.
Posted by Erin at 6:00 AM