How to Shell a Fava Bean (aka What in the Hell am I Doing, and Why?)

Before I signed up for biweekly organic produce deliveries, I had never seen or tasted a fava bean, nor had I wanted to.

See, I, perhaps like you, watched Silence of the Lambs when I was around 14 or 15 years old -- it was probably a year or two after the movie had come out and one of my friends had the movie on VHS (my own parents would never have allowed this to be shown in their home, but then again, I also wasn't permitted to watch Beverly Hills 90210. But I digress).

And during one scene everyone who is even the slightest bit plugged in knows -- Anthony Hopkins utters this infamous line:

I ate his liver with a side of fava beans and a nice Chianti.

And then he makes a disgusting slurping noise.

It was then that I knew:

1) Fava beans were a disgusting bean that I had no desire to ever see or taste.

2) I definitely wanted to taste Chianti.

So it was with slight repulsion that I realized I'd received fava beans in my organic produce delivery. Actually, I didn't know what they were, but the informative bulletin in the box of produce told me that they were, indeed, fava beans. 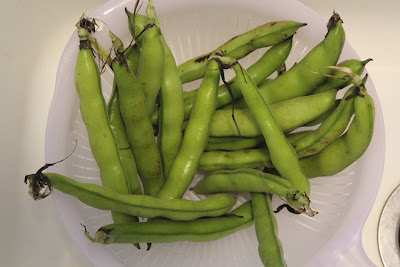 Seeing as how I am on a mission to eat more green things, I decided to give fava beans the old college try. So I googled "how to shell a fava bean," whilst banging my head against my desk in self-loathing, and then I moved on to shelling fava beans. 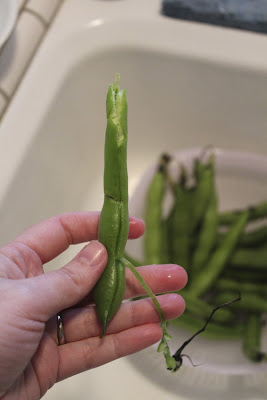 For starters, you take your bean, and you attempt to unzip it. This make or may not work. I advise just tearing into the bean in any old fashion that pleases you. 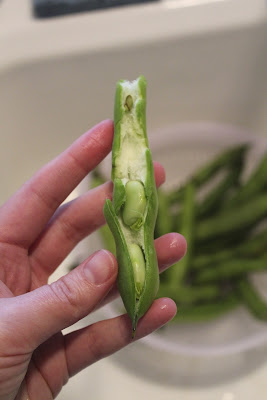 Once you have the repulsive thing open, you will notice it is filled with a hairy fuzz, much like a disgusting alien pod from an enemy planet might be. Also, beans. 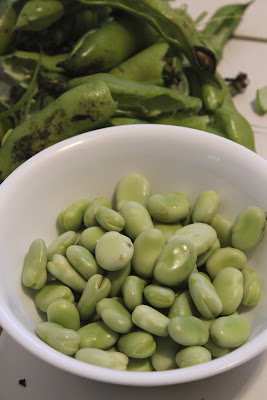 This is how many beans I got out of those pods.

Now you have to cook the beans in some fashion in order to loosen their disgusting outer skins, because -- you guessed it! -- they have to be peeled again. 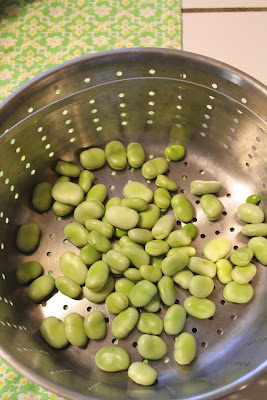 One website suggested I steam them for a minute to help retain maximum nutritive value.

I am all about maximum nutritive value these days. 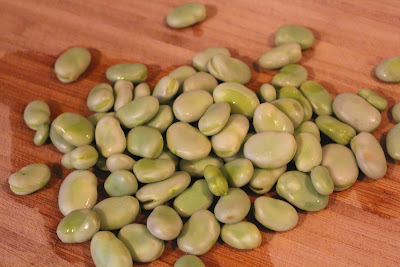 Here is what the beans look like after they've been steamed. In other words, exactly the same as before. 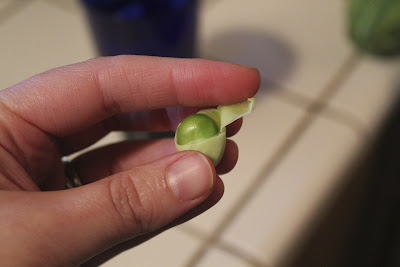 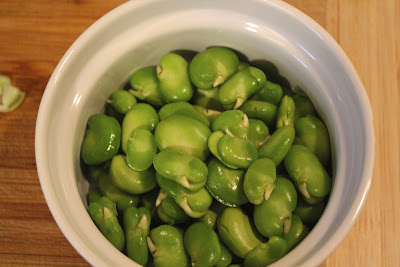 And this is the sorry number of beans I pulled from their weird skins. As you can see, each fava bean has a disgusting tooth. Or penis. Not sure which. (click the photo to enlarge!) 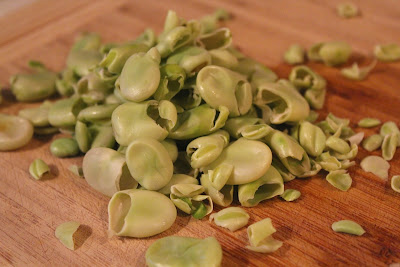 So I immediately popped one of these in my mouth as soon as I finally got that sunnuvabitch unwrapped from its second pod, and I'm happy to report that fava beans are not disgusting. They're rather nutty, actually. Pretty good, if you can get past their disgusting bean penis.

I tossed the beans into a shrimp scampi, and it was quite delightful, if I do say so. No, I do not have pictures of the shrimp scampi, but if you're curious, it had butter and lemon and shrimp and quinoa noodles in it.

In conclusion, fava beans are not the devil and I endorse the eating of them whenever you have four hours or so to kill shelling a bunch of disgusting beans.

Just kidding. It took maybe half an hour.
Posted by Erin at 10:40 AM