In anticipation of next week's start of the 21-day cleanse I decided to test the waters, to see if I'd be able to handle drinking a shit-ton of juiced vegetables every day.

What I concluded after yesterday's experiment was that, no, I definitely cannot drink the juice that I made yesterday because it:

1) Tasted terrible.
2) Made me feel nauseated.
3) I mean it tasted really, really bad. 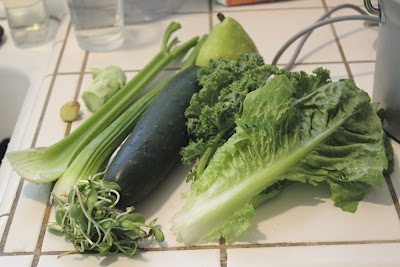 So here's what I juiced. Two romaine leaves, two kale stalks, two celery stalks, a whole cucumber, a handful of sunflower sprouts (these are one of the insane superfoods you are supposed to be eating), a broccoli stalk, a pear, and a small piece of ginger.

Just looking at that is making my stomach turn a little. I think what made it taste really terrible was the cucumber. I cannot handle that much cucumber (that's what she said). In fact, I don't think I ever want to eat or drink or smell another cucumber as long as I live. 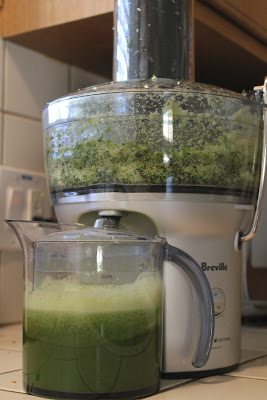 That is an awful lot of green juice. 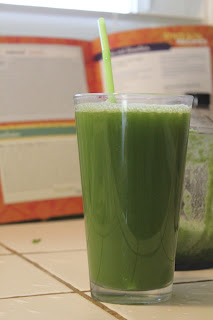 In conclusion, I think I need to take baby steps. Action plan for next juicing episode:

1) NO CUCUMBER for godssakes.
2) More fruit. Maybe a pear and an apple.
3) Less ginger. It makes it weirdly spicy.
4) Less juice in general. Like half of that would've been twice as easy to drink.

As far as how I am feeling ... particularly after yesterday's juicing episode, I felt really bloated and tired. Today I had a very successful elimination, if you get my meaning. Cleaning out the pipes and whatnot. Crazy Sexy Diet says I'll probably feel kind of crappy as the toxins leave my body. If that's what's happening, she's right.

No posts until Tuesday, when I start the cleanse, eek! Have a great long weekend!
Posted by Erin at 10:29 AM