Cleanse: Day 1 (sweeter is not the answer)

Let's talk about the weekend, first.

Friday night I made a pizza, using gluten-free crust, making my half vegan with vegan cheese and mushrooms, and my husband's half delicious, using meat and mozzarella.

Lesson #1: Vegan cheese tastes like booger snot. If a person is going to eat vegan, I suggest just eating vegan and not participating in faux cheeses and meats.

Saturday night I made a Buddha bowl, which basically involved chopping up lots of veggies very finely and mixing them up with some hot brown rice to just barely cook them. 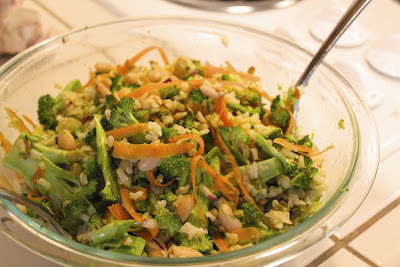 It had garlic, onion, olive oil, and plenty of flavor. My carnivorous husband even liked it (not loved, but that's to be expected). So...

Lesson #2: Not all vegan food tastes like shit. Yay!

The rest of the weekend was spent shoving in as much "forbidden" food as I could. I was in a bit of a panic about giving up meat, dairy, gluten and all processed foods for 21 days. So on Sunday I had an In-N-Out hamburger, and it was delicious. I savored every bite. And that experience confirmed for me that giving up meat forever is out of the question.

Sunday night I also ate chicken fried steak and eggs, plus biscuits and gravy. It doesn't get more forbidden than that.

Monday I had a meaty breakfast and then ribs later in the day, followed up by frozen yogurt later in the evening.

And now here I am on Day 1 of the cleanse. This morning started with a big glass of water with lemon and a dash of cayenne. It wasn't my favorite, dog. Spicy water in the morning? Meh. Then I had a mug of herbal tea.

I waited until I got hungry to make my first juice of the day, and I have to say today's juice is about five times better than last week's. Here are the ingredients: 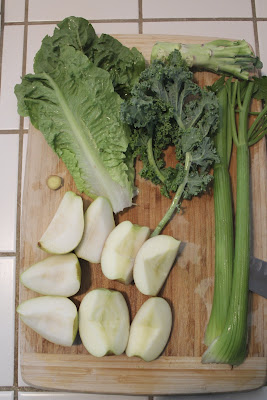 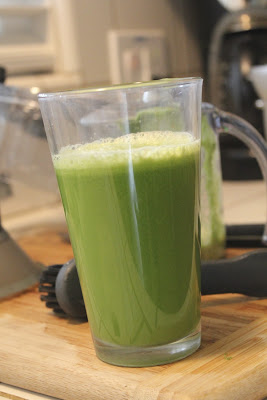 Lesson #3: More fruit doesn't necessarily make it taste better. It makes it sweeter, which is not entirely necessary because the juice from the vegetables is already sweet. I added a little lemon juice after I tasted it, and it helped balance out the flavor quite a bit. The dominant flavor in today's juice is celery, which is a helluva lot more palatable than cucumber.

I also had to give up coffee starting today, which was hard. I made coffee for my husband this morning, and felt a compulsion to drink my own mug of the stuff when I smelled it. I didn't, though.

Crazy Sexy Diet says to expect some withdrawals, so I'll post updates here...
Posted by Erin at 10:40 AM