You guys are all pretty well-versed in beet preparation, if your comments on last week's beet post are any indication. And I just wonder -- how? I don't remember beets being present at a single meal when I was growing up. Maybe my parents didn't like beets.

Maybe they were right not to.

So as you'll recall, I roasted a beet until it looked like this: 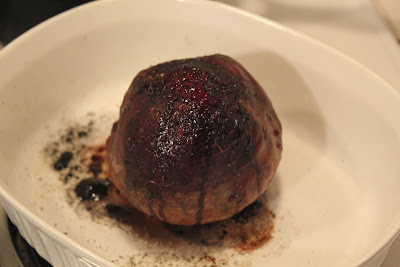 Which I compared to a bleeding cow's eyeball. I've dissected a cow's eyeball, and this is pretty much what it looks like after you've taken your scalpel to it.

Several commenters encouraged me to just peel the damn thing and slice it up and put it in a salad. So I did. 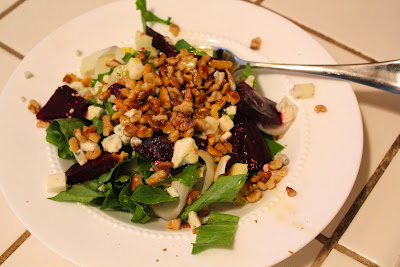 It was good. My husband liked it quite a bit. I ate most of the beets until my stomach yelled: PARDON ME. WHY ARE YOU FEEDING ME GOAT POOP.

Now, what tastes right is if you subtract the beets from this salad and add in some slice apple and dried cranberries. Which is what I did the following night.

In conclusion: I tried the beet and it sucked. I'll be subtracting beets from my Farm Fresh To You deliveries, seeing as how there are still two giant beets sitting in the fridge that I have no idea what to do with.
Posted by Erin at 11:10 AM