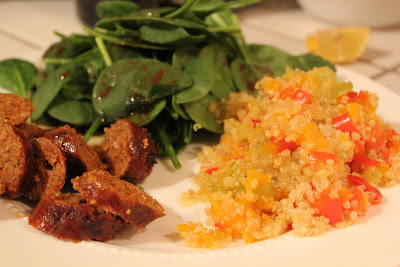 This is an Everyday Food recipe from the March 2011 edition, and it's the second time I've made it because:

The recipe in the magazine calls for rice instead of quinoa. I used rice the first time I made this dish. 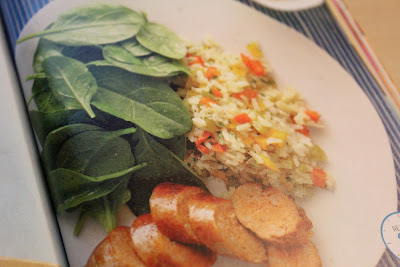 Picture from the magazine
And I admit -- it's better with the rice. But if you're like me and you're trying to cut out processed foods and eat your whole grains while also being gluten-free, quinoa is a good way to go. It ends up tasting the same, with a slightly different texture. (You could use brown rice, but it takes forever and a day to cook) 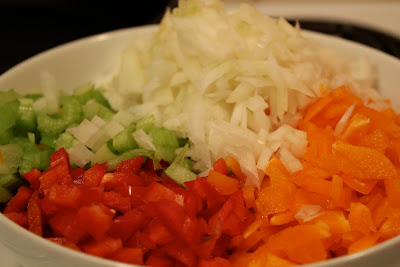 So here you start out with two chopped bell peppers, whatever colors you want. I picked red and orange. I wanted a yellow one but all of the ones at the grocery store were shriveled and anemic. Also in this bowl are two diced stalks of celery and a diced yellow onion. You heat some olive oil in a pan and throw these in there with some salt and pepper and cook 'em for a few minutes. 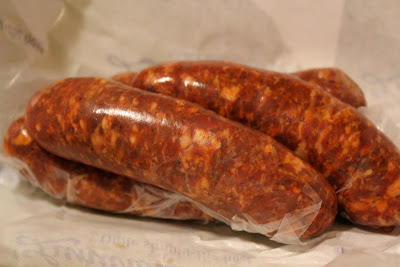 Then you unwrap your sausage and take a picture of it. Then you throw it in a pan and brown it on all sides and then turn the heat down and let it cook through with the lid on. 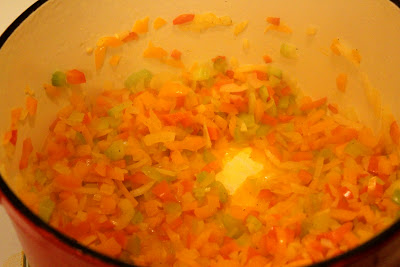 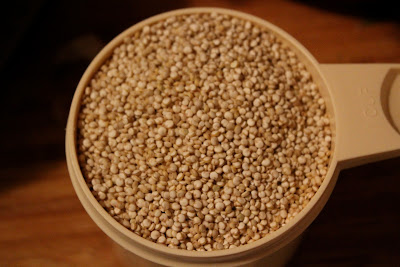 .... then you can throw in a cup of this. Quinoa. Pronounced keen-wa. Do not fear the quinoa. Then throw in some water, bring it to a boil, then cover and simmer for 15 minutes. 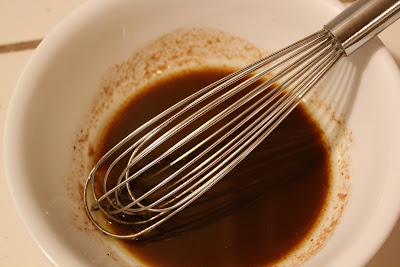 The magazine suggests tossing your spinach with red wine vinegar and olive oil. I appreciate the spirit of the recipe, which is: A homemade dressing is better than a store-bought dressing. My favorite store bought dressing has MSG in it, which makes me very sad. Anyway, what I do is I throw some olive oil and a little balsamic vinegar in a bowl, drop in a dollop of dijon mustard to bind it, salt and pepper it, and then a dash of garlic powder. You can really use any salad dressing you want, go crazy!! 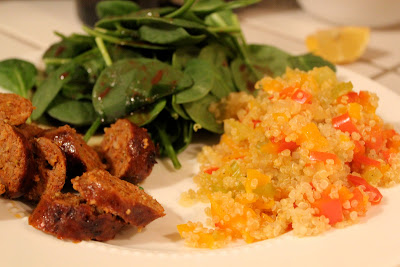 When all is said and done, it pretty much looks like this, except that if you're a better recipe-follower than I am, your rice/quinoa will have some finely chopped parsley in it. That would have been pretty, wouldn't it?

Anyway, I really do love combinations like this -- some kind of salad with a tangy dressing, a spicy meat and a starch (or as close to a starch as I'm gonna get). I heap a little of everything on my fork and eat it all together.

So because this recipe is new to the magazine, it's not on the site yet. See below for instructions!

In a medium pot, heat 1 tablespoon oil over medium-high. Add celery, bell peppers, and onion and season with salt and pepper. Cook, stirring often, until vegetables soften, 5 minutes. Stir in rice and 1 1/2 cups water; bring to a boil. Cover, reduce to a simmer, and cook until rice is tender, about 15 minutes. Remove pot from heat and let stand, covered, 5 min. Fluff rice with a fork and stir in parsley.

(I find that starting the sausages right after you put your veggies in the pot to soften makes this all time out perfectly) Meanwhile, in a small skiller, heat 1 tablespoon oil over medium-high. Add sausages and cook until browned on all sides, about 10 min. Reduce heat to low, cover, and cook until sausages are cooked through, 8 to 10 min. Let rest 2 min before slicing crosswise.

In a medium bowl, toss spinach with vinegar and 2 teaspoons oil. Season to taste with salt and pper; serve spinach alongside rice and sausages.

Post script: Today is my first post over at Tired and Stuck! Check me out!!
Posted by Erin at 10:40 AM