Working for the weekend

This was almost a really annoying post about risk and reward and having it all. Then I stopped, and remembered it's Friday.

So, a few bullet points, then a recipe.

- Tonight the new season of Who Do You Think You Are starts. Laws, I love that show.

- It's Super Bowl weekend and I need to clean my dirty house. Why, Lord? Why do I have such a dirty house?

- I need to figure out what I am eating during the Superbowl. Priorities, people. Priorities.

- I think I shall bicycle again tomorrow. Yessiree. It's supposed to be 70 degrees. 'Twould be criminal not to bicycle.

- I might make my damn good chili tonight. It is damn good.

- The thought of my bathroom floors is making me cringe.


Ok that's it for bullet points.

I made this really super awesome Thai Chicken and Noodle Salad last night. It's from Everyday Food's May 2008 edition.

So good that I didn't take a picture of the finished product because as soon as it was done it smelled so wonderful I just started shoveling it in my mouth.

But here's Martha's picture of it: 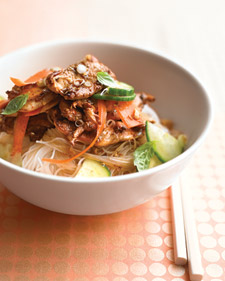 And here are some photos of my ingredients (taken with my phone. I be lazy): 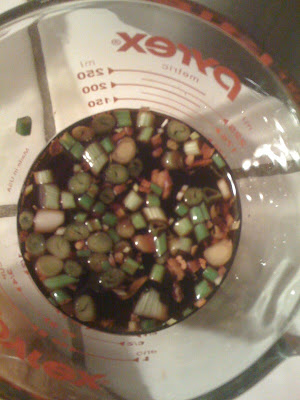 This is the spicy Asian dressing, and it is so delicious. You use half of it to marinate your chicken and the other half to drizzle on the finished product. A TIP: The recipe calls for anchovy paste or a minced anchovy, which I did not use. Instead, I used fish sauce, which I think a lot of us are way more likely to have on hand. 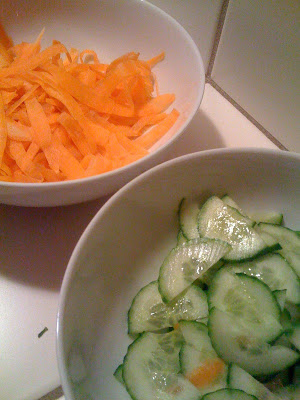 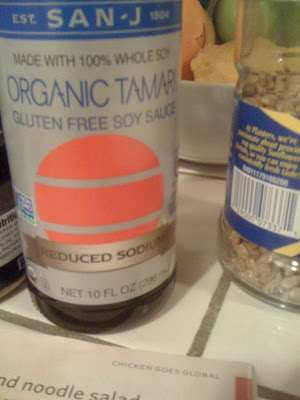 This is a gluten-free soy sauce I found at Whole Foods, since my husband is gluten intolerant. It tastes exactly like regular soy sauce. 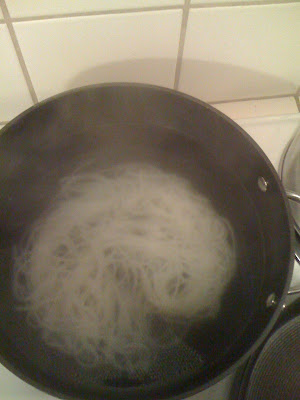 This is some Thai rice noodles soaking in boiling hot water. A TIP: The recipe calls for only 3.5 oz of noodles. We found this to be way too few noodles. What I'd do next time is take the whole 14 oz box of noodles and cook them, then divide them between four bowls (assuming you're feeding 4 otherwise half it), then assemble the rest of it. The recipe says to put it all on a platter, but that's a little annoying to deal with.

So anyway, you should definitely make this dish, but using my tips.

It's the spicy Asian dressing that really makes the whole dish. The cucumbers (and I normally hate cucumbers with the fire of a thousand suns) are a delicious and crispy accompaniment.

Here is the link to Martha's recipe.

Have a lovely weekend and I hope your football team wins! Ours sucks and didn't make the playoffs. :-)
Posted by Erin at 10:53 AM