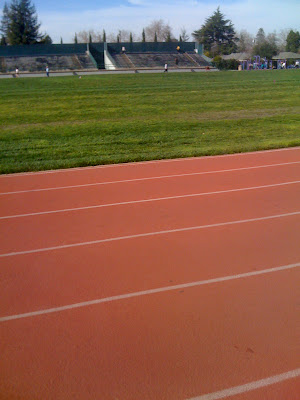 My husband says Don't go to the track at night. Even though at night this place is jam-packed with people. Hundreds. And it's well-lit. But trying to huff and puff my ass around this thing with all those jackwagons in my way doesn't appeal to me, anyway, so I am going to go during the day.

Even though there was a hella skeezy guy leering at all the chicks on the track today. I'd like to introduce that guy's face to the pointy part of my elbow. (I'm waiting for a year of kickboxing to come in handy)

This morning concluded Day 2 of Week 1 of the Couch to 5K program and my leg is acting up again, which probably means I am running like a retard. But I shall persist.

I found a fantastic iPhone app that lets you play your own music and then when it's time to run or walk, it tells you. So. Damn. Cool. It's called "Couch to 5K" and was made by Felt Tip Inc. if you're interested in finding it. No, it's not free, but at $2.99, it's a helluva lot cheaper than a gym membership.

That's all for today. I have a few thousand words to write and a trip to the godforsaken grocery store in my near future. Toodles til tomorrow.
Posted by Erin at 1:35 PM