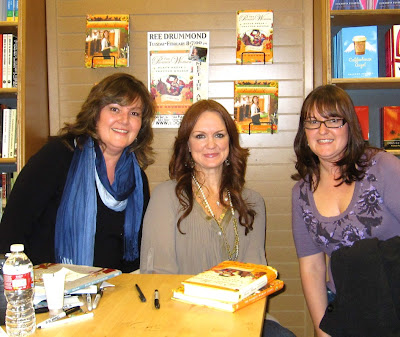 There's just no accounting for:

1) Why I look terrified in this photo.

2) Why Ree looks so cool, calm, and collected in an 80 degree bookstore after she's been signing books for two hours.

3) Why I am holding my jacket that way.

4) Why my mother invited Ree to stay at her house.

5) Why I didn't employ my best double-chin banishing technique.

6) Why Ree doesn't look scared that we are flanking her like wild-eyed weirdo Internet fans.


The deal is that yesterday my mom and I went to Books, Inc. on Van Ness in San Francisco to have The Pioneer Woman, Ree Drummond, sign our books. We bought copies of her new book, Black Heels to Tractor Wheels

, and she also kindly signed my crusty cookbook. 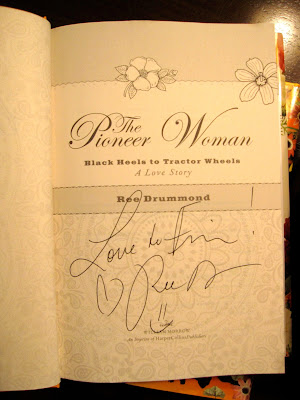 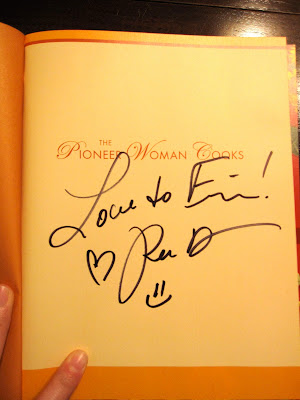 Also in tow were her two daughters, her niece, her mother-in-law and her sister-in-law, Missy. I didn't take photos of them because I think taking photos of kids you don't know and posting them on the Internet is creepy. Even though Ree's kids seem really down-to-earth and completely unfazed by their mom's popularity among certain wild-eyed female blogger-types.

We didn't know what to expect and initially planned to arrive on time -- 7 p.m.  Until I read that some people in Los Angeles waited in line for three hours to have Ree sign their books, at which point we decided to arrive an hour early.

By the way, we took BART up, and I really do hate BART with the fire of a thousand suns. My mom asked, More than Sizzler? And now that I've had time to think about it, no, I think I still hate Sizzler more.

Also, to further digress, my mom and I are two of the most directionally challenged people you will ever meet. The fact that we made it to the BART station in Fremont, then actually took the correct train and got off at the correct station in San Francisco and then actually found the bookstore is nothing short of divine intervention. We were meant to meet Ree.

When we arrived, there were about 70 people already there, sitting in chairs. We found two footstools to sit on, and then we met an Egyptologist who took this photo: 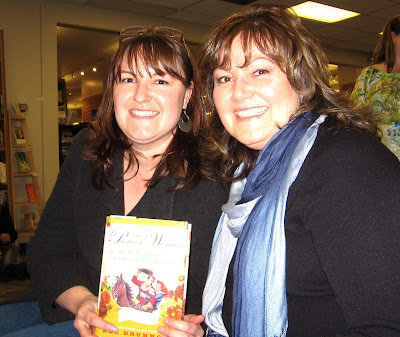 There is no accounting for why I could not wear a little lipstick and also, the double chin? Why, Lord? Oh, why?

Anyway, I mentioned the Egyptologist? True and fascinating story -- this striking blond gal named Alicia who was also waiting to meet Ree told us that until a few short days ago she was working in Cairo in a museum and had to be evacuated. I worked up the nerve to ask her for her blog address, and you can read about her fascinating adventure here.

There were tons of other bloggers there, but I didn't have the guts to go asking everyone who they were and getting their web addresses. It shall remain a mystery until I Google them later.

So we waited for a bit and then Ree & Co. walked in and Ree did a little Q&A, joking about fearing public speaking and needing tissues for her armpits. She is nothing if not relatable, humble and sweet. She answered questions for about an hour and addressed what I'd been wondering about -- whether there truly will be a Black Heels to Tractor Wheels movie, and currently it's a possibility but as far as she knows there's nothing in the works. She did get to meet Reese Witherspoon, who'd expressed an interest in playing her.

After the Q&A, we all lined up according to our assigned letters (Mom and I were F -- for flunky), and from there it took about two hours to get to the front of the line. During that time, we laughed hysterically, whined incessantly about how heavy our purses were, whined about how our feet hurt, whined about how hot it was in the book store, and whined about being hungry. It's how we roll.

Then we got to the front of the line, whence all rational thought was stricken from my brain and I became a monotone robot zombie and took a terrible photo and then left. It all happened so fast.

But what I can tell you is that Ree is gorgeous in person. I don't think photos do her justice. You can't see the color of her eyes in most photos, which I think are a kind of stunning green/blue.

So then we walked back to BART. 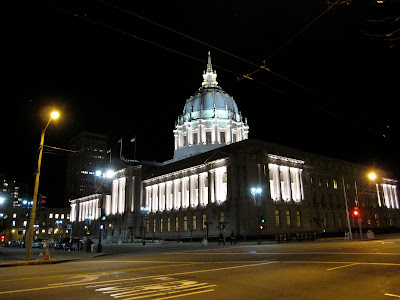 And I took this photo of City Hall (for the record I brought my crappy camera instead of my good one, God knows why. Why, Lord? Oh, why?)

And then we waited for BART.

And then we sat on BART.

And then we drove home. And then I ate chicken and went to bed.

The end. Fascinating tale, I know!

All in all, it was a good little adventure, and we're glad we got to meet (ish) Ree and have her sign our books. And, of course, once I read BHTTW I'll review it here as well.
Posted by Erin at 11:15 AM