I have this forehead. This Ellen Page forehead. It's a lot of forehead. I mean, people aren't saying, Wow, didja see that forehead? But I see it.

And I've had this hairstyle for about 14 years. It's the style I adopted soon after I started college in 1996 and realized my poofy bangs had been out of style for at least seven years.

Here's how I been lookin' since then. 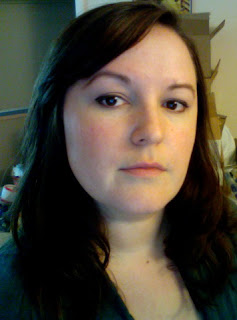 The color has varied from blonde to black but I think I've settled on dark brown, which is my natural color. I think.

Problem was that vast forehead was staring me in the face every day. I longed to cover it up, so I did. 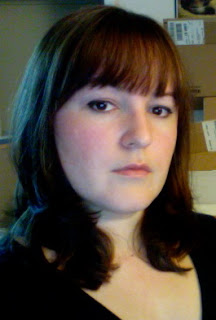 I was trying to make the same face, for comparison's sake. Feel free to give your honest opinion. I'm on the fence. For one thing, my forehead is warmer, and I don't have to stare at that vast white expanse, or deal with that terrible side part, which for some reason seemed mannish to me.

Also, never you mind what's going on in the background. I know it looks like we're filming "Hoarders" over here, but that's just our latest eBay sell-pile. *groan*

An anecdote: I came home with this hairstyle last week and my husband says, "You have bangs." I say yes. He asks "Are those new?" I tell him if he isn't sure, then he's been playing too much World of Warcraft.
Posted by Erin at 12:17 PM