A pair of thoughtful friends lent us a book of gluten-free recipes over the weekend. It's called Make it Fast, Cook it Slow

, by Stephanie O'Dea, who incidentally earned her fame by cooking something in her crockpot every day for one year, and then blogging about it.

Hmmm, that sounds familiar. Like, maybe I saw a shitty movie about someone doing something similar...

ANYWAY. All bitterness about overnight Internet fame and money aside....

There are some very good looking recipes in the book. One of which was for Butternut Squash Soup. I happened to have a butternut squash and the main staples on hand, which meant I would not need to leave the house to acquire ingredients, and there is nothing I like more than hunkering down like a hermit and eating soup. Lemme tell ya.

So I had this small squash that I cut in half. 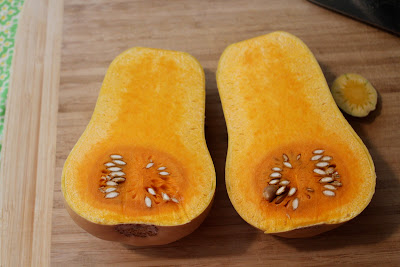 Then I scooped out the seeds and then I stared at the gourd and wondered, Self? Have I scooped out enough of the innards? Me not know. 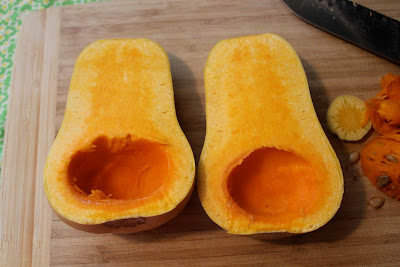 Then I chopped up a honeycrisp apple and an onion (I'll spare you photos of me crying onion fume tears this time) and threw in a bunch of spices... 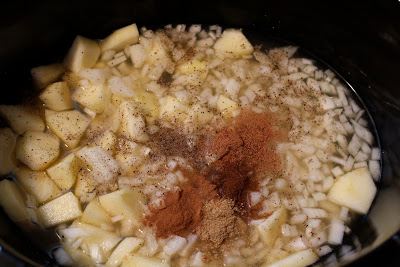 ...while I roasted the squash. 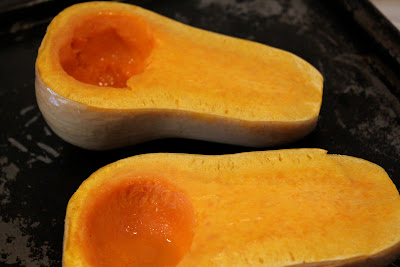 The squash took longer to roast than I expected. Once it was done I took a wild guess about what I was supposed to do next and I scooped the remaining squash innards out and put it in the pot. I say I took a wild guess because O'Dea neglects to include this portion of the instructions in her recipe. She says to roast the squash and then put it in the crock pot. Oh, really, O'Dea?? I think you're bluffing. I think you need to scoop the squash out of the skin first, and then put it in the pot.

We are like children, O'Dea. We prefer numbered, step-by-step instructions. This is why the "For Dummies" books sell so well. We are looking for people to tell us how to do stuff as if we were dummies who had never seen a butternut squash in our lives.

Anyway here's what that mess looked like after I scooped out the squash, no thanks to you, O'Dea. 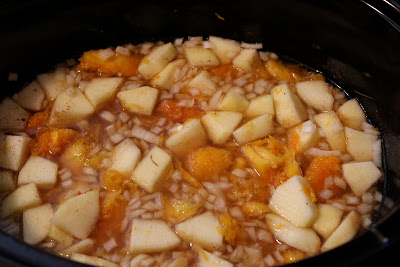 Then here's how it looked after I slow-cooked it on high for four hours. 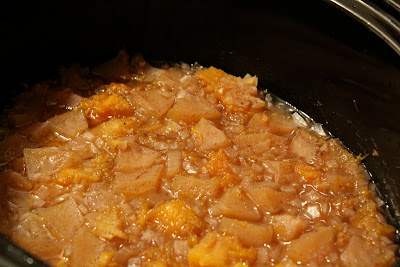 So I smoothed it out in batches in my food processor.

Word to the wise (or the dummies): Do not try to blend the whole thing in your food processor at once. Your food processor does not want to hold that much liquid at once and it will all leak out. You don't believe me, do you? Well then, go ahead and try it.

Here's what the soup looked like when it was ready to be eaten. My husband was not impressed with its appearance and may have said it looked like a certain substance he was overly familiar with before he quit eating gluten. 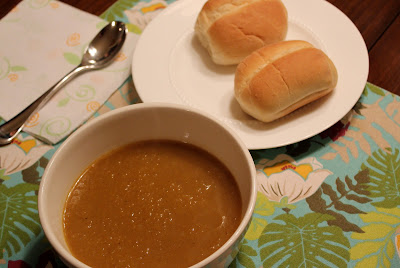 But he really liked how it tasted.

Yes, those are two French bread rolls. With gluten. I ate them. With butter. I had some left in the fridge and couldn't bear the thought of not eating bread with this soup. I don't regret it one bit.

I deviated from the recipe a little bit, and I believe it was for the better. If I were you, I'd use a hecka big butternut squash so you can get more of that orangey color I was looking for.

So, here is O'Dea's bastardized recipe!

Use a 6 quart slow cooker

Cut the squash in half lengthwise. Scoop out the seeds and stringy pulp. Brush the insides with olive oil and roast squash for 15 minutes, or until skin peels away from flesh (Yo, dummies. I roasted mine for 25 minutes and the skin never peeled away from the flesh. I say roast that thing until it's soft enough to scoop out with a spoon).

Turn the slow cooker to high. Add broth, onions and apples. Stir in salt, pepper and spices. Cover to let heat. When the squash is done roasting, scoop out the innards and add it to the pot. Cover and cook on low for six to eight hours or on high for about four hours. Carefully blend with a handheld immersion blender (Or if you're a dummy like me: Blend it in three or four batches in your food processor).
Posted by Erin at 2:28 PM