I hate to fly, but love to travel. Two warring sentiments.

So because I love to travel so much, I never let my fear of flying deter me. I only worry about the flight starting the night before I have to get on it. Then, it's all I can do to stop myself from putting my head between my knees and yelling for my mommy throughout the whole flight.

Then we get off the plane and I'm fine again, until I have to fly home!

Las Vegas is a mere 1 hour, 15 minute flight from San Jose. You can get an alcoholic beverage about half an hour into the flight, which is 30 minutes after I've already remembered the plane crash I covered in which everyone died and imagined the vast space between the bottom of the airplane and the ground. It's 30 minutes after I've started reasoning with myself that surely everyone on this plane is much too attractive to die. They probably all have some grand purpose they've yet to fulfill on Earth, so this plane probably will not crash. No matter that it's simply impossible that I'm hurtling through the atmosphere in an aluminum tube.

All that to say that I braved certain death to visit Las Vegas, and returned unscathed, although I needed 24 hours to recuperate from lack of sleep and over-consumption of alcohol.

We stayed at New York New York and I am stating for the record that the decision to stay at this shit-tastic hotel is entirely my fault because for some reason I thought it was a nice hotel. I think someone told me it was nice. Perhaps that was 13 years ago, shortly after it opened. It probably was nice, at that time.

We arrived and they told us they could not guarantee us a king bed, which would leave us with two queen beds, which is straight up retarded. Our other option was to upgrade to the Ziggurat Room, which was 1,100 square feet and had a hot tub. We upgraded.

My first impression of the Ziggurat Room was that it was hella green. It soon became evident that the tinting on the windows was green, and regardless of the time of day, it always looked like nuclear winter outside. 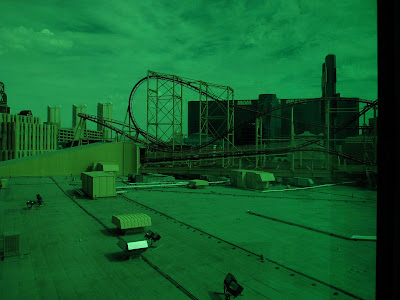 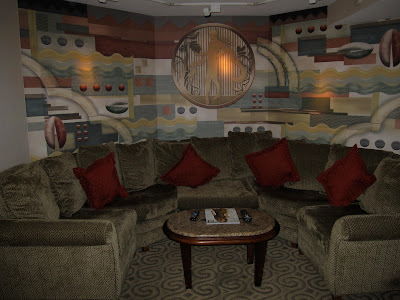 1992 called. It wants its disgusting mural and track lighting back. 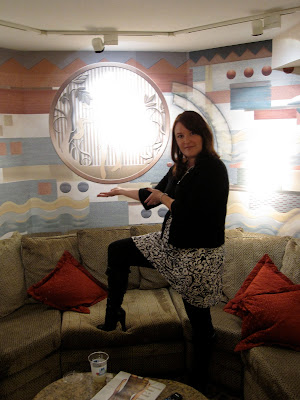 In homage to the room, I wore leggings and my new dirty pirate hooker boots. I was crippled upon our return from dinner at the MGM. 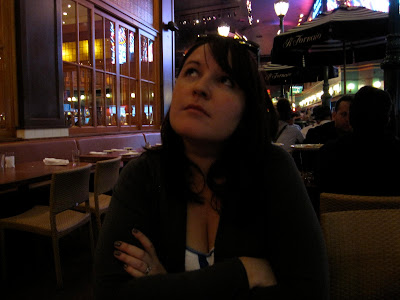 Dinner at Il Fornaio in NYNY. It was surprisingly decent, but I was unimpressed with my surroundings. 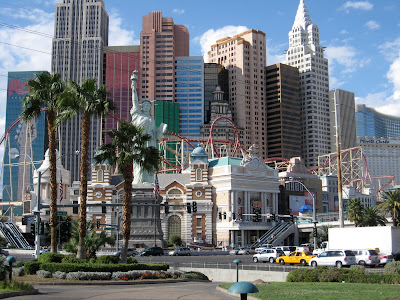 There! Over the Statue of Liberty's left shoulder -- that's our green dungeon.
All right! Enough bitching about the dumb room. It served its purpose.

Things I did not take photos of but which were totally awesome:

- Dinner at Craftsteak. This is Tom Colicchio's fancy schmancy restaurant in the MGM. We got the Chef's menu, and it was So. Much. Tasty. Food. Course 1: Heirloom tomato salad, caesar salad, grilled prawns, and mozzarella with sun dried tomato chutney. Course 2: Ribeye, filet mignon, mushroom risotto, grilled asparagus, potato puree. Course 3: Caramel apple cake with caramel ice cream, raspberry & chocolate sorbets, a fruit plate (that I completely ignored), and creme brulee. Never mind that this meal cost more than a month's rent on most of the aforementioned apartments.

- Blue Man Group. I know what you're thinking: "WTF?" My husband has always wanted to see it and although I was leery, we went. It ended up being really entertaining. Word to the wise: Do not be late, do not wear all black, and be prepared to participate.

- Le Reve. This was "my" show, as in we went to Blue Man Group for him, and Le Reve for me. It might have been the two glasses of chardonnay, but I almost cried during it, it was so beautiful. The show is partially aquatic and partially acrobatic and you find yourself wondering how in the world they are doing what they are doing.

- Society Cafe at the Wynn. I've heard they have a delicious breakfast there but we had dinner. They had these delicious macaroni truffle things that are kind of beyond description. My wedge salad was wonderful. Our orrechiette pasta with sun dried tomato and asparagus dishes were light and delectable.

- Gambling. My husband was glued to the Monopoly machine and I played several hours of video blackjack. I think we came out ahead, but who knows?

- Hanging out with my charming husband. We didn't watch TV, we didn't spend every waking hour on our iPhones, we didn't play video games (other than gambling). He's all right. I think I will keep him.
Posted by Erin at 12:28 AM