So Sunday was the Juvenile Diabetes Research Foundation's Walk for the Cure, which I participate in every year since my sister was diagnosed about four years ago.

We raise a little cashola and then meet up and walk at a snail's pace for about 45 minutes and then eat something and it helps us feel like we are doing something good, something that might actually lead to development of better drugs or even a cure.

(Sidenote: Juvenile/Type 1 diabetes is genetic, not a result of eating too many french fries.)

This year the walk was at Great America in Santa Clara, so there was a good turnout.

And there were some excellent people-watching opportunities.

Before the walk, a woman and a kid led a "warm-up" that was way more vigorous than the actual walk. Besides which, who warms up for a walk? Walking is a warm-up in and of itself, no? 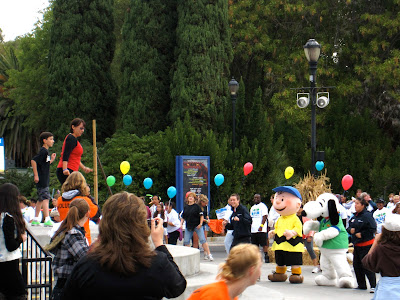 The "warm-up," to the tune of the Black-Eyed Peas' "I Gotta Feeling." Charlie Brown and Snoopy are getting their groove on. 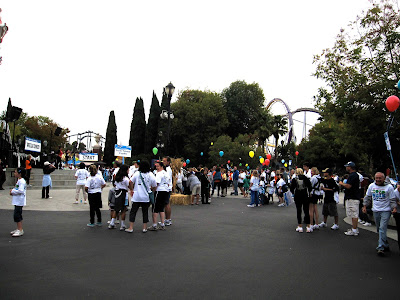 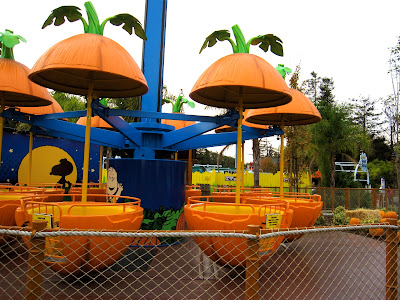 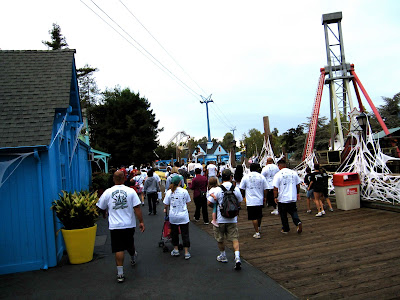 Walkers & cobwebs. Sounds like a good name for a band. 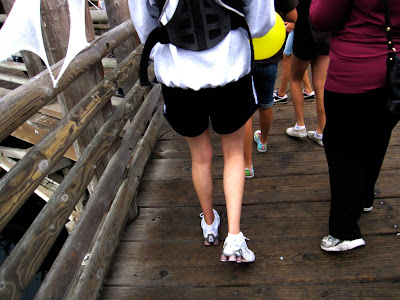 This woman's legs were so skinny, I had to take a photo.
And then, of course, there was Team Sugar Free. We walked in front of this team of about ten 8-year-olds for about 5 minutes before deciding to let them pass because they were yelling quite angrily "Team! Sugar! Free!" over and over. I tried to catch it on video but this really does not represent how ... vocal they were.
They're the little squirts in blue shirts scurrying on by. The video's only 11 seconds and you'll hear my sister telling me I need to get closer to them and me saying "Ugh, no." We sound like the same person and we both sound really weird.


So that was it for this year's JDRF walk. Next year we want to get a really big group together and make our own T-shirts and yell something obnoxious as we're walking. Who's in?!
Posted by Erin at 11:15 AM