Two years ago after a bunch of the family got together at Chukchansi Gold Resort & Casino for my grandma's 80th birthday, most of us got sick. My theories included food poisoning and norovirus. My aunt believes it could have been Legionnaire's disease, which us facilities wizards are familiar with: it's a bacterial thingy that grows in your air conditioning system. One more thing to worry about, right??

Anyway, we were a little wary of going to a casino again for my grandma's birthday, but the fact is there is simply nothing that woman loves doing more than pushing the "deal/draw" button on the video poker machine. So this year, we went to another Native American-run casino in Lemoore -  Tachi Palace. 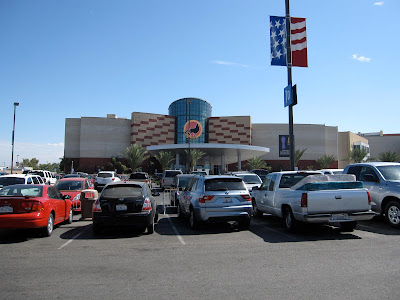 It was muy, muy caliente in the Valley on Saturday.

There were 11 of us, and we made off toward the buffet right away. For the record, Tachi Palace has an excellent buffet. I'd venture to say it's better than Chukchansi's, and so far none of us have fallen ill from eating at it, so that's a win! 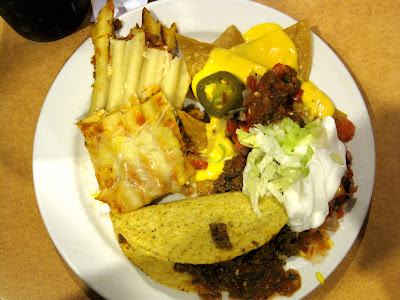 This was my first plate. That's nachos, a taco and a piece of lasagna. Later I went back for biscuits and gravy and a piece of bacon. A truly healthy meal, obviously. 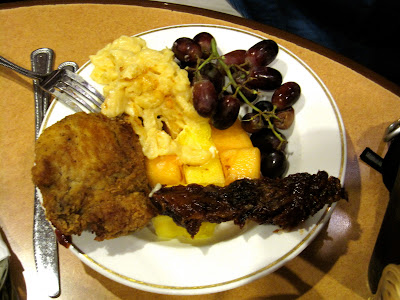 My aunt's plate: A rib, fried chicken, mac & cheese and some fruit. Fiber is important. 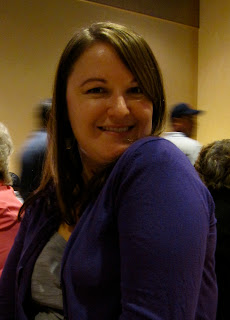 I am so coy post buffet-gorging. I am ready for a carb nap.

After the buffet, the group divided. I made a bee-line for the bar and had a $9 martini. If I was going to lose money in a casino, I wanted to get at least one thing in return.

My sister and I tromped on over to some machines and collectively lost about $30. I found a place I could buy a latte. My sister had mint-chip ice cream (my half-Chinese friend tells me white people love mint chip ice cream. How do you feel about that, white people?).

We tromped on back to the machines to watch my grandmother play video poker. She has Parkinson's and can barely walk, but I truly believe she would stay in that chair, pressing the "deal/draw" button for two days straight, before collapsing in exhaustion. On a normal day, she takes a nap before lunchtime, but on Casino Day, she taps into some vast reserve of energy.

Problem is, she's the sweetest lady you'll ever meet and she looks totally heartbroken when you tell her it's time to stop feeding ten dollar bills into the machine because we have to go. Best to just hand her another $10.

We did finally get her out of Tachi Palace by promising her we would come back on Thanksgiving. I'm already planning my buffet meal...


(sidenote - I said the phrase 'Indian casino' twice to my Indian friend on Sunday. Like, she is actually Indian, not Native American. Are we still calling these things Indian casinos? Am I the most politically incorrect a-hole roaming the Earth? And also, curses upon the pilgrims for calling Native Americans 'Indians' and putting me in this situation in the first place. That is all.)
Posted by Erin at 11:17 AM