There was much bickering and bitching and moaning and preparation involved in what I have deemed the Great Sell Off of 2010, but when all was said and done, it was SO. Worth it.

Because now? I have my living room back. There are three things in it. A couch, a table and a lamp. It is bliss.

I shall show you some awesome before-and-after photos but first, just a quick rundown of how the garage sale went. For starters, two neighbors backed out of the block sale, which resulted in only two homes participating in the block sale, which pissed off a lot of people who thought they were coming to a -- You guessed it! -- block sale, per my advertisement on Craigslist.

I had always promised myself I would never talk shit about my neighbors on this blog because, HELLO, I live next to them, and as one of my neighbors says quite frequently: We must keep the peace at all costs.

But to those neighbors who backed out literally at the last minute? You can suck it. That was just rude.

The sale was to start at 8 a.m. but early birds showed up at 7 a.m. and bought all the best stuff right away. I didn't even have time to brush my teeth. The crowd between 8 and 9 a.m. was INSANE. It was like Macy's was having a 75% off sale and everything! must! go!

We sold almost everything. By 1 p.m. all that remained were three small boxes of stuff that we loaded into the car and took to Goodwill. Also around 1 p.m., a neighbor who'd bought a desk from us came back to return it.

I know that We must keep the peace at all costs, but Neighbor Who Returned The Desk? You can suck it. This is not Target, this is a garage sale. You can actually suck it twice. We put the desk on the corner with a "Free" sign and it was gone in an hour.

I almost -- almost -- feel guilty, because some of these people who bought this stuff were surely hoarders. They bought armloads of random stuff, seemingly unable to stop themselves, and I imagined them returning home with their new treasures and deciding, Well, I suppose I can put these in the bathtub. Showers are overrated.

All right, I will shut up now and give you the photos. 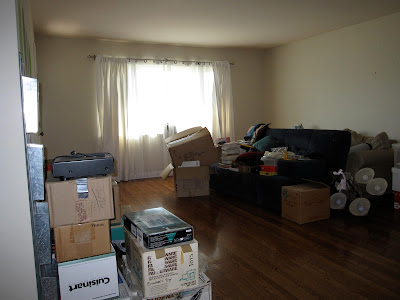 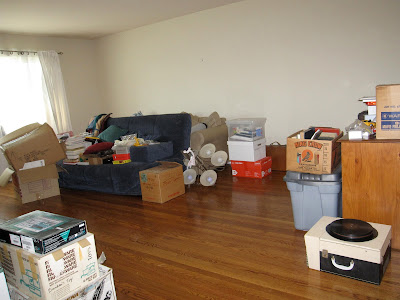 You might wonder who would want all this crap. You would be surprised. 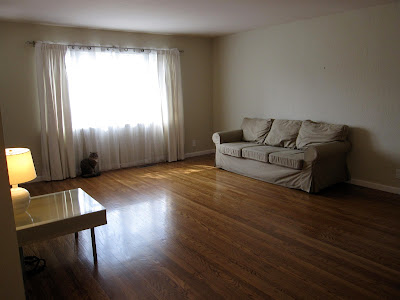 Did you just get chills? Because I do, every time I walk past the living room now. 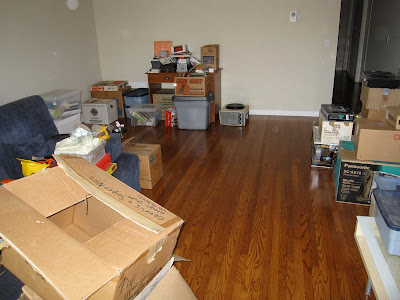 The mess from a different vantage point, standing near the front door. This is why people always ask, "Oh, did you just move in?" 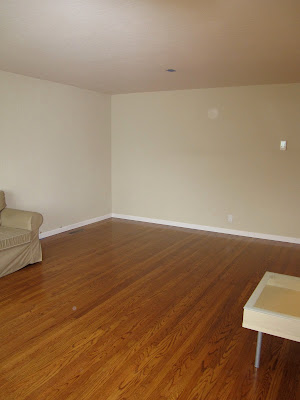 That is one big blank thing of beauty. 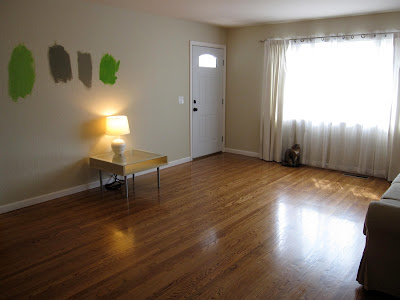 Guess what's up next? Paint. You get four guesses which color I will choose.
Posted by Erin at 11:32 AM